With my interest in the hobby revived, there naturally followed the urge to buy some more stuff. So here are a couple of things I convinced myself I had to have.
Battlefield In A Box - Ruined Buildings 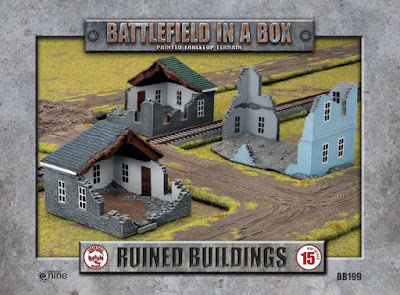 I'm currently using Battlegroup as my WW2 rules of choice, which use a 1:1 scale - an individual model soldier represents an individual soldier. So built-up-areas can't really be generic - each house is individual, and a strict awareness of who is in what house is required. Hence the attraction of ruined buildings - they can be deemed to provide the same cover as a full building, but you can easily see what's inside.
Not being a scratch-builder, or even much taken by painting-up ready made houses these days, the above product from Gale Force 9 seemed ideal. I saved a few quid by ordering from Firestorm Games rather than the Flames of War website - the cost was about £36. In brief, I was entirely satisfied with the purchase. The actual models are just as good as they look on the box, being well cast and very well painted. The ruined roofs are detachable for even easier access.
The photos below show the buildings with some 15mm Polish troops - these buildings are of course in of 15mm size, or 1/100th scale if you prefer. To conclude - 'I heartily endorse this product'. 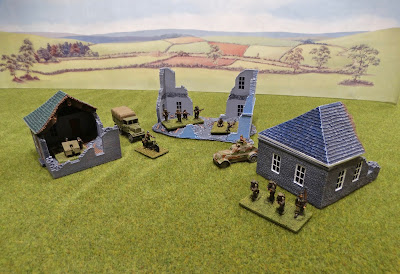 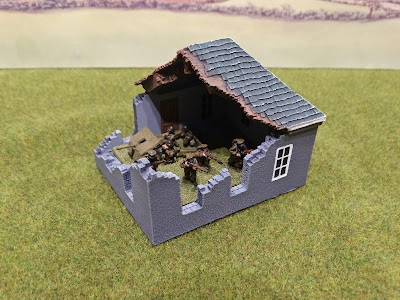 Whilst on the subject of ruined buildings, I wanted to show off another such which I painted myself during lockdown. This effort was a long time coming - see the last part of this post from 2017 for the original purchase. I kept looking at the model and deciding it looked too fiddly to paint, what with all that rubble. But 3 months of furlough was finally sufficient for the effort to be made. Actually, I'm quite pleased with the result and this ruined factory should sit well with the ruined buildings I've just bought. As you can see, the 'yard' area is separate, and a floor can be lifted to access the interior. 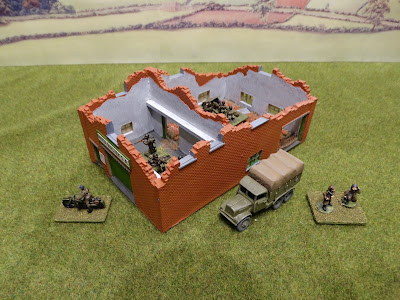 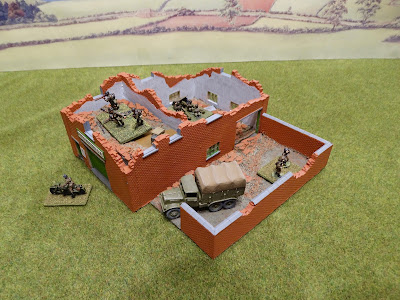 Train Track
A bit of a niche purchase here (even in a niche hobby like ours), but moving house involved me in throwing out the old bits of track I had bought for my Polish armoured train. The train is the old Peter Pig model, designed for the Russian Civil War and (I believe) no longer in production. When I acquired it in 2008 there was no Flames of War armoured train, although subsequently I added the FoW assault car to the loco and artillery cars I already had.
I also, of course, had to find some track (no FoW train track either, back in the day), and I discovered I needed what is called TT scale stuff, with a 12mm 'gauge' - that is, 12mm between the rails. I went for some lengths of 'flexible' track, which worked pretty well as it could be bent round to accommodate different wargaming layouts. But years of bending took their toll and it started to fall apart. Hence its disposal when we moved house.
TT scale is also a fairly niche thing in the world of model railways, but I tracked down what I needed from the Kernow Model Rail Centre. This time I bought some straights and curves. So now I have some shiny new track for the train to run on. Cost was slightly less than the FoW product, though the points (if I ever get around to buying some) are more expensive. FoW do a rather tempting expansion pack, but in the end I thought the railway modellers' stuff would fit my needs better. 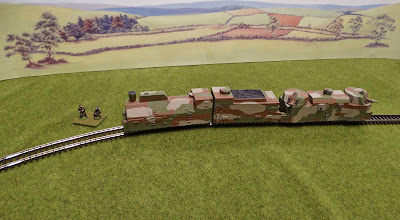 Frustation
Well, that's about it for now. Very frustrating not to be able to organise some games with my various gaming buddies (especially when I need to do some playtesting with Shadow of the Eagles), but we must be patient and hope for the best.
Go well everyone. 'Til next time!
Posted by Keith Flint at 11:05

The Peter Pig armoured loco is still in production.
Neil

Some nice purchases there Keith and seeing the armoured train brings back fond memories of a game we put on at Colours quite some time ago. Good that your gaming mojo is back too so hope to see some AAR's in the future.

As for FtF gaming nothing rmeotely on the horizon as we are now in tier 3 lockdown which is no surprise, given the number of cases here and the fact that both hospitals are at near capacity.

Neil - thanks, I tried their site but couldn't find it.

Steve - sorry to hear you're heavily locked down. We are in tier 2 it appears. I could really do with some face to face gaming!

Scroll down to Russians

Ah! In the WW! section. Thanks.

It's really frustrating these days. Fortunately we could play at least with one or two friends during the Christmas weeks.