A Period of Restraint

In the midst of what is sometimes a period of excess, it was interesting for me to reflect on how little money I have been spending on our hobby recently. For example, my Christmas wargaming binge-out consisted of that which you see below. 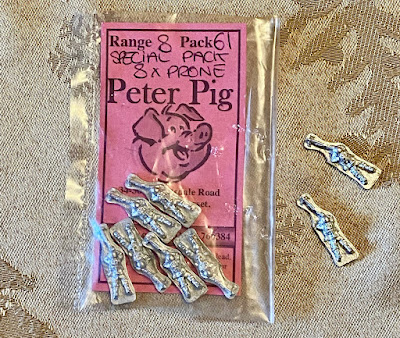 Yes, 8 prone BAR gunners. I needed some BAR gunners to reinforce my Polish 1939 infantry, but the availability of 15mm figures for this period is now very restricted. True North Miniatures seem to have disappeared, and Flames of War also seem to have discontinued their Polish stuff - so much for big manufacturers supporting the hobby. But at 15mm size an American BAR gunner will do fine - the helmets in particular are almost identical. The lovely people at Peter Pig do a bag of 8 BAR gunners, and they agreed to make up a special pack of 8 in the prone position at a small extra charge. Just over £8 including postage and they were with me in 48 hours. Now there's a company supporting the hobby - and they've been doing it for decades.
Not buying much has been a trend for me since I started work on Shadow of the Eagles. I thought maybe when the money from sales came in I would think about putting together a couple of Napoleonic armies, but the enthusiasm doesn't seem to be there. I did end up ordering a 'brigade box' of the new Warlord Games 'Epic' figures, just to see what all the fuss was about, but then cancelled the order the next day. (I got an immediate refund at around 8 o'clock at night, another bit of good service from a wargames seller). I really couldn't see myself painting 80 figure units. Or even halving the units and painting 40 figures at a time.
Broadly speaking, it would seem 3 collections is the most I can cope with. I haven't touched my ancients in months, for example, and I would like to get some games in with them in the New Year. Starting a new collection would just be a distraction from enjoying what I already have.
So at Partizan in October, when I did the Shadow of the Eagles demo, I came away with  single Osprey book (on War Elephants). And that was it. I've spent out on a couple of military history books since then, but no specific wargaming stuff. Until my monster purchase with Peter Pig!
This I find very satisfying. Coming back to my existing periods after a deep dive into Napoleonics has been a great pleasure, an example being the large Battle of Chotusitz game I played with some old friends back in November. You can find an excellent report on that game on the Wargaming Addict blog. The photo below shows the game in progress, using a 10' x 6' table and a rented room at my local community centre.
So my New Year starts not with plans for adventurous new projects, but a hope that Omicron will allow me to get back into the swing of playing my SYW, Ancients and WW2 Poland games with friends, just as in the past. Well, there is the matter of continuing to develop my revised edition of the WRG 1973 WW2 rules. There will be more of this in another post.
Happy New Year everyone. See you in 2022!
Posted by Keith Flint at 15:37 6 comments: