If you have the Black Powder rule book you'll be familiar with the ACW scenario 'Daybreak at Hangman's Creek'. I decided to have a go at this with my SYW forces, renaming it as befits the different period. Witzenhausen is the German town twinned with the town where I work. I just liked the name.
This is not a particularly big game so I had no trouble getting together about the same number of units per side as in the original scenario. However, a 12' x 6' table is rather too much to ask in my family home. I was able to squeeze an 8' x 6' table into the dining room by removing most of the furniture, and this would have to do. My infantry units would be mostly 20 figures rather than 36 which would make things easier. I also omitted the gun foundry and the outer arm of the river. The 2 photos below show the terrain I ended up with. Initial on-table troops are deployed and the Prussian commanders placed on their baseline ready for arrival throws. 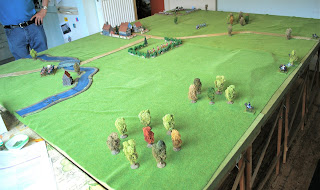 The scenario was mostly as per the book. The Prussians would arrive on their baseline following successful command rolls for each brigade: any late arrivals could be put down to the problems of a night approach march. All the Austrian commanders started in the town, the camp was occupied by 1 Austrian brigade, and the other 2 were off table. 2 small light infantry units acted as the advance picket who could deploy anywhere on table as long as they were no closer than 12" to the Prussian baseline. One regiment from the Austrian cavalry were also allowed to start on table, guarding the bridge. As shown below, I substituted a cavalry brigade for one of the infantry brigades on each side, and arranged things so that the cavalry brigades would not start opposite each other. This would scupper the obvious option of a mutual charge, and hopefully make each commander think a bit more deeply about how to employ his cavalry.

Loss of the town or camp would count as a lost brigade for the Austrians.
Forces were: 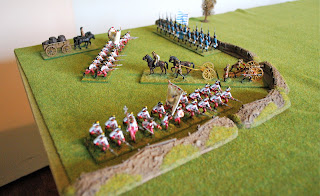 Hungarian and Bavarian battalions occupy the camp at the start of the game. Their absent commander may be imagined sleeping off a heavy night in an inn at the nearby town 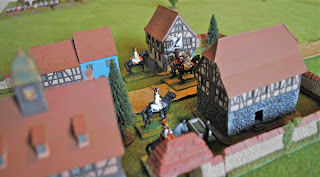 Austrian commanders concentrated in the town. 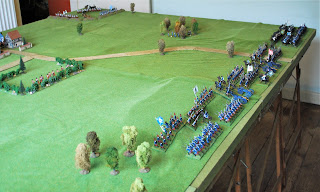 Prussian deployment. All brigades managed to arrive on the 1st turn. Prussian forces are concentrated onto the right side of their baseline, to avoid the constriction of the river bend to their left. Austrian Grenz occupy the field and wood in front of them. 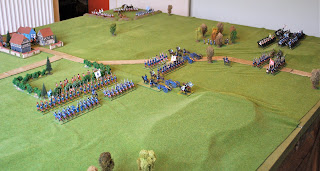 The Prussians manage a rapid advance in the first turn. 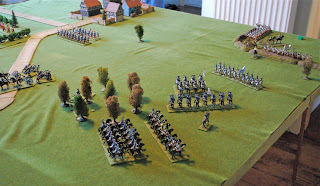 On the Prussian right the cavalry loop around the wood. They have a tempting expanse of open ground ahead. 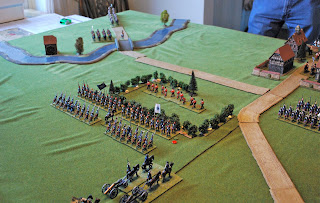 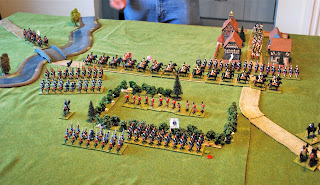 After a slow start, the Austrians start to arrive in force. Their cavalry come galloping over the bridge and find themselves in the midst of the Prussian advance. The Prussian infantry on the left just missed out on blocking the bridge ahead of them. 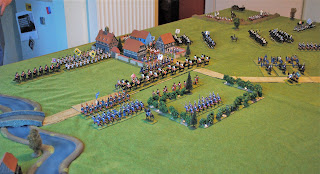 The action is now in full swing, concentrated around Witzenhausen and the camp. Austrian infantry have occupied one half of the town whilst a Prussian battalion has the other half. The Prussian guns have deployed to bombard the camp, but their own cavalry have foolishly blocked their line of fire. 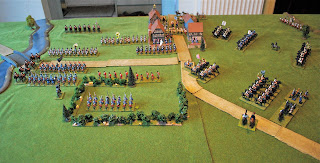 The Prussian cavalry has reached the town but doesn't seem to know what to do next. The Austrian cuirassiers form themselves into line and go after some of the Prussian guns (they have just destroyed two). 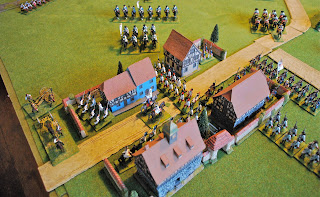 Close up of the action in the town. It was formed from 2 'blocks'. Technically there can be only 1 battalion in each block, but an Austrian battalion has moved up the road in column through the Austrian held block and is attacking the Prussians in the next block. Temporarily there are 2 Austrian battalions in one block. 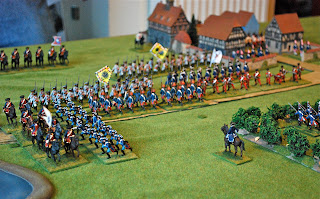 Close quarter tussle between the town and river. 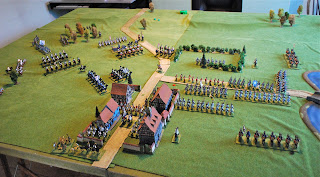 Final positions. We managed 5 turns, but neither side had had a brigade broken.
Let's call it a draw!
Conclusion
An interesting game despite the lack of result. Units were all over the place, with battalions and regiments of both sides on each other's flanks and rear. This resulted in an excellent tryout for the rules.
Posted by Keith Flint at 15:01 4 comments: