The Battle of The Simbach Bridge.

Well, the usual apologies are appropriate for the rather long gap between this and the last proper wargaming post on this blog. I have to admit the wargaming flame has been burning rather low the last couple of months, and the excuse is the common one - the intrusion of what we like to call 'real life'. In my case, this mostly consisted of the negotiations that led to me retiring in late September, and the consequent downsizing to a new house.

Let me reassure readers that wargaming in our new smaller residence can continue - my usual 6' x 5' table will fit well in the dining room, although anything bigger might be a problem. And I have a 'study' that's a bit bigger than my previous 'enhanced cupboard'. I may even be able to have an armchair in there when the appropriate rearrangements have been concluded. Then, world beware!

But enough of domestic matters. As November came around, I awoke from my lethargy and started to take my hobby seriously again. And top priority was a Napoleonic game to playtest the latest updates to Shadow of the Eagles. Once again my old buddy Roy was willing to help out, with table space at his home and his wonderful Hinton Hunt armies. I sketched out a quick scenario, including the map as below, but left Roy to choose the armies and year of the game. I was wonderfully surprised and pleased to see, on my arrival, that he had chosen Austria vs. Bavaria in 1809, an original and fascinating choice. Napoleonics without the French? Who'd have thought it possible! 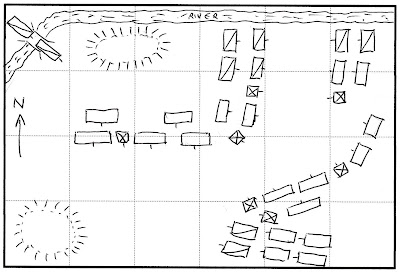 The Bavarians are defending the bridge over the Simbach, seen at the top left-hand corner of the sketch map. They have sixteen units organised in 3 brigades of infantry and 2 of cavalry, one of the latter still arriving over the bridge at game start. The attacking Austrians start the game half-deployed, with their left wing hurrying across the table from right to left and their centre rather lagging behind as well. They have nineteen units in 4 brigades of infantry and 2 of cavalry. Artillery batteries are brigaded with the infantry and cavalry in both armies.
Roy left me to set out the armies whilst tea was prepared, and it was a pleasure to handle the lovely old figures and set them out ready for battle. I could feel my gaming mojo strengthening by the minute. The results of my efforts are seen in the 3 photos below, which show the overall deployment and then the Bavarian and Austrian armies respectively. My apologies for the quality of the photos - they were taken in haste and a bit of camera-shake crept in. 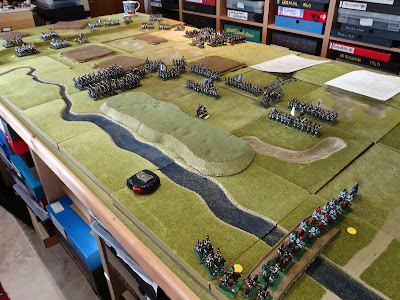 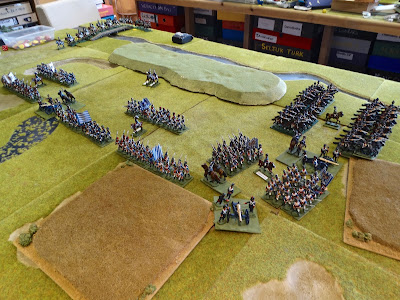 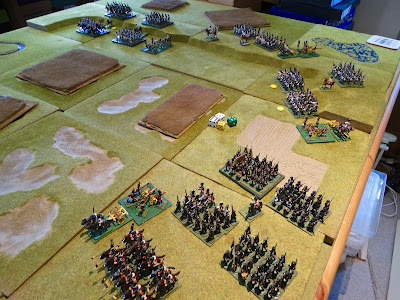 I took the Austrians, and predictably struck for the potentially vulnerable corner of the Bavarian 'L', whilst the brigade of lancers leading the left wing headed west towards the bridge at full steam ahead. I was able to dislodge a prominent Bavarian infantry battalion with concentrated artillery fire and effect a break-in, as shown in the photo below. Thereafter the crowding in of Austrian battalions left my artillery blanked-off from their targets. So much for pre-game planning. 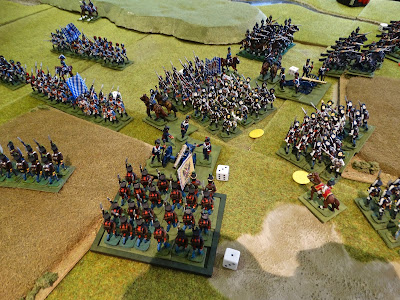 Equally predictably, the Austrian lancers were met head on by the Bavarian right-wing cavalry charging forward from the bridge. Unfortunately, these gentlemen turned out to be an allied French brigade of high quality light cavalry. However, my lancers did pretty well in the circumstances. After 3 moves of grappling, and the overthrow of one of the French regiments, one unit of lancers was well-placed to make a dash for the bridge and win the game. Unfortunately, in their weakened state, they found themselves forced to halt to re-organise, and a battalion of Bavarian infantry had time to peel off and head to the bridge themselves. The game ended before this contest could be decided. A stage in the cavalry battle is seen below. 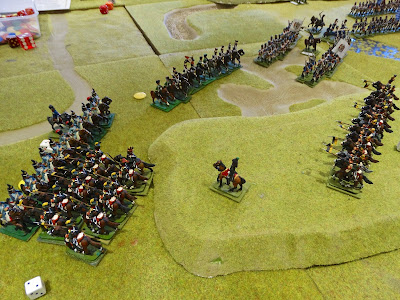 The two photos which follow show the game at its height. The Austrian break-in slowly developed into something like a break-through, with units being lost on both sides. Unfortunately for Roy, his powerful left wing cavalry brigade of 4 regiments of light dragoons were saddled with an 'inept' commander. Despite my kindly advice to avoid throwing 'ones', Roy stubbornly insisted on producing 3 such rolls which held the brigade back at crucial moments. I have to say my leading cuirassiers, in contrast, had an excellent game and so the 2 Austrian cavalry regiments on this flank were able to impede, and even slightly push back, the 4 Bavarian regiments opposed to them, helped by the river protecting their right flank.
To their credit, Roy's cavalry did aggressively engage some of the Austrian infantry in this sector, and did very well until the Austrians remembered this wasn't the Seven Years War and they could form square, which helped them considerably. 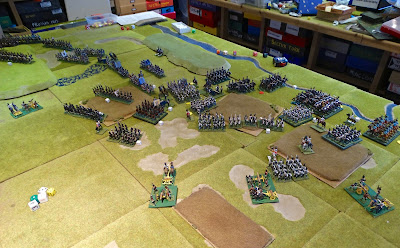 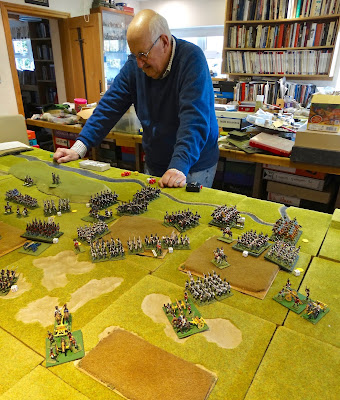 And so a couple more photos to finish off this account. The number of routed Bavarian units slowly increased, and although the Austrians suffered too, after about 5 moves or so Roy was staring defeat in the face. Rather than prolong the agony until the required 50% of units were actually lost, he resigned in my favour. In the first photo below, the situation in the centre at end-of-game is shown, with the Austrians still striving valiantly to effect a breakthrough. The final photo shows Bavarian and Austrian infantry in close combat on the Austrian left. The Austrians are (as Roy had to tell me) a dark-coated Landwehr unit, which I was allowed to class as regular for this game. 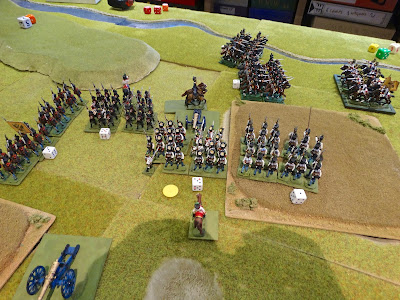 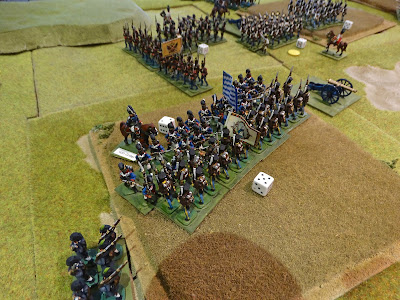 The rules worked smoothly, so much so that I found I had made no notes on changes or improvements when the game was over. Just as importantly, we had both had a very enjoyable few hours with plenty of time for chat in between moves, without being distracted by intrusively over-complex or poorly explained rules.
My thanks to Roy for so generously hosting this game, and ending the experience by gifting me a book and lending me 3 others. This hobby really is, in the end, all about the people.
Best wishes to all in the coming lockdown. Go well, 'til the next time!
Posted by Keith Flint at 20:47

What a great looking game Keith. A most appropriate return to wargaming. Your figures are lovely indeed.
The new 'digs' sound great, especially the larger study.
I concur with your recommendation of Gunter Rothenburg's book. In fact any of his many works on the Napoleonic period. He was a fine author and has left us with some excellent books.
Regards, James

Keith, this is a fine looking game, indeed! Sounds like the rules are withstanding the rigors of combat nicely. I really ought to give them a try since I love Honours of War.

James, I should emphasise the collection belongs to Roy.

What a great looking game and Roy's figures look superb. Lovely to see a game sans the French and Napoleon!!! Glad to see that the rules seem pretty much resolved with no issues raised in the game, plus of course your gaming mojo returning. Mine has been missing of late but some recent painting might lead to a game or two.

As for a dedicated study, I can only say I'm jealous!

Great to see you back Keith, a fine looking encounter and nice to get the toys on the table.
Cheers
Stu

Hi Keith, well done on getting this up and running. Good to see the rules pretty much done. Any idea on publishing schedules? Dave F

Nice to hear from you again Keith. A number of wargamers seem to be suffering from lack of mojo and for me even such magnificent games as this don't prod me into action. Seem to spend a lot of the time tidying up and clearing out. Often a useful activity but not much fun. I hope all your life changes proceed well and you stay healthy. Best wishes. Jim

As for publishing schedules, the aim was Christmas, but that's probably going to slip. Dave Ryan seems very laid back about such things - when the rules are fully ready he'll be ready to publish. The lead time is quite short with Partizan I think - not like Osprey who have a very set schedule and often long waits between submission of final manuscript and publication.

Its nice to get out and manage some in-person gaming

Keith,
Excellent battle report and game. What rules did you use? Again, my hat is off to you sir.
Neil

Good to hear that your move has been successful Keith, and that you were pleased with this test game. How lucky to have Roy to help you, both for his wonderful collection(s) and his vast wargaming experience and military history knowledge.

Chris, thanks for your good wishes. As for gaming with Roy - couldn't have put it better myself!

It's a nice small engagement. Reminds me of my time in the area. I think it was in Schärding not far away from the Simbach where I saw a canonball from 1809 in the wall of a house next to the market. Great report. 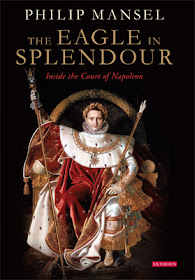 Not, I'm afraid, a book with any wargaming relevance, but a fascinating study of Napoleon's court life which reveals a fundamental part of his character. In summary, a man who was at heart an absolute monarch, obsessed with his own image and power and the creation of his own dynasty. The amounts he spent on new palaces and ceremonial clothing are astounding, for example. Every time I read about Napoleon, the concept of him as the 'Monster of Europe' makes more and more sense.