'The Ancient Battle of Ardea'

It's no use looking up this battle in your history books, as it is entirely fictional. It was fought as a celebration of the conclusion of my ancients project.

The battle was a very basic set-up so I could get all the figures onto the table and give King's of War Historical a good shake out. I went for a 'classic' ancient wargame look - flat terrain with just a few palm trees for background, and the armies set out on opposite baselines. 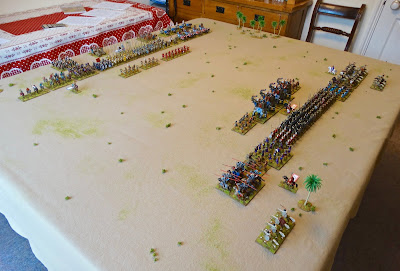 I had belatedly realised that my S&A Scenics 'Dried Earth' felt battle-mat needed some scenic scatter to give a little more texture and colour. The look is definitely improved, but I reckon adding a bit more green would be a good thing.

In the photo above you see the forces of Latium on the right, with Paphlagonia to the left. In total (that is, including both sides), I appear to have assembled around 320 infantry, 60 cavalry, 8 chariots, 4 elephants and 4 war engines. A modest enough collection by some standards, but a very pleasing achievement after about 2 and a half years of what I originally called 'The Trimsos Project'.

It all started with a game at Stuart's house, transformed itself into a rules-writing project which failed to be taken up by Osprey (they were right - I have abandoned those rules now), and has finally resulted in a collection of figures which give me great pleasure, along with the discovery of a rule set which I am happy with - Kings of War Historical. So much for the usual advice about 'sticking to your goals' - in this project I have just followed where my instincts led me and have wandered well off the path of Mr Featherstone's rules and his original 1962 battle.


With hobbies, it is best to follow the advice of Buddhist meditators - 'do not crave your goal, but allow the process to unfold'. This seems to produce maximum relaxation and pleasure. It is instructive to reflect on the stage I had reached in January 2017, and remember that the test game I played on a 3' x 3' table with mostly unpainted figures was nevertheless an absorbing and enjoyable couple of hours, and as much a part of my hobby as any games I will play with my full collection: 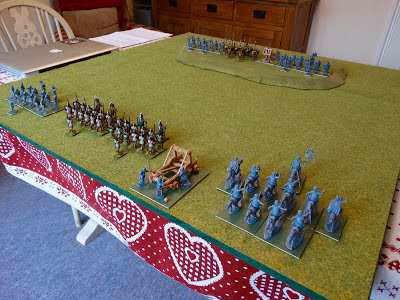 But back to the present. 'Ardea' was a solo game to get me back in the ancients groove after many weeks poring over the history of the Napoleonic Wars (of which you may hear more at a later date). The photos below give a flavour.


As I mentioned, I am still liking the Kings of War rules. In this battle, I noted that the elephants were rather too powerful and I will be reducing their melee ability - a simple matter of changing a melee factor of 3+ to a factor of 4+. And I will be adding a home-grown 'stampede' rule to make them entertainingly unreliable.

It now remains only to get some games in with wargaming friends and enjoy the social part of the hobby. Of course, in our hobby as in any other, the Fat Lady never really sings and it's never really over. But I don't feel any great need for more in this section of my wargaming. In particular, I've had quite enough of painting figures, and the expense of acquiring ready-painted figures will provide a reassuringly restrictive influence.