There's nothing like getting into a new rule set to give a wargamer an excuse for some retail therapy. I mentioned some initial purchases in a recent post, but I felt the need for more. You know what it's like. I am reminded of the phrase from The Fellowship of the Ring, when Bilbo's guests at the Long Expected Party are "at that delightful stage which they called 'filling up the corners'". I guess that's where I am with my wargames purchases these days. No grand new projects for me, just filling up the odd corner.

I thought it was well past time I had an artillery spotter plane for the 1939 Poland campaign. The Poles didn't really qualify for one, but the Germans certainly did. Not tempted by the boring old Fiesler Storch, I plumped for the much grander Henschel HS-126. 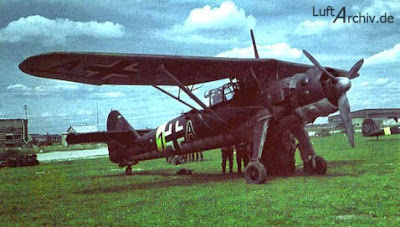 The problem is there is no 1/100th scale model available. Therefore there was little choice but to risk the 1/144th model from good old Zvezda. It had the advantage of being cheap, and I knew from past experience that I would get an accurate little model that was easy to put together. In fact I would cite Zvezda as one of the best reasons to promote better relationships with Russia. Any country that can produce a company like this can't be all bad.

Anyway, the model is indeed absolutely fine. As you can see from the photo above, it was not a small aircraft for an observation plane, and so the model comes out at a reasonable size. Over the table the smaller scale is hardly noticeable. 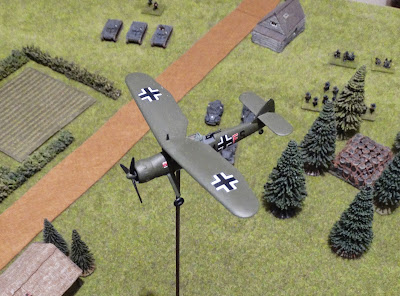 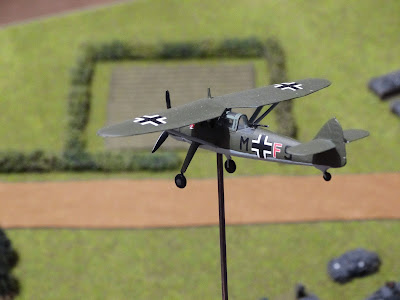 There was further temptation. In Battlegroup Blitzkrieg there is the chance of random airstrikes, and the rules indicate a selection of possible aircraft which might arrive, including passing fighter planes dipping down for a bit of strafing. Thus the possibility of including a Bf-109E, or a PZL P.11c in my collection raised it's head. I did discover that both models are available in 1/100th scale from Old Glory UK (see here and here). But manfully, I resisted. I already have 4 aircraft in my 1939 collection (JU-87, Hs-123, Karas and now HS-126), and a couple more that would hardly get used seemed a bit over the top. For the moment anyway. You never know.

Markers
A link from the Iron Fist Publishing site led me to a purchase of a set of markers for BGB. They are made by Commission Figurines, and I purchased them from their eBay store.  They are laser cut from MDF and have all the possibilities you could want. In fact, there are rather more markers in the set than I am ever likely to need, so some have gone into store. For a fiver, you can't go wrong. As you will see from the link, they are left in a natural wood colour which I think works well, avoiding them being too intrusive on the table whilst still being obvious in use.

Armoured Train
Now, the fact that there are no rules for armoured trains in BGB wasn't going to stop me using mine. I have already knocked up a set of rules for my train, with the help of some pointers from Piers Brand on the forum. Playtesting is yet to come. But then I recalled that a), my train had no assault car, being adapted from the Peter Pig Russian Civil War model, and b), Battlefront were now selling the elements of their own armoured train separately. So around 20 quid got me an assault car which I have added in to give me a complete train.


As finally completed, my train has most in common with the real armoured train no.51 'Marszalek'.

The Battlefront assault car model was OK, but not really of the quality I would expect from them. The resin body of the car comes in 3 parts which plug together, the 2 ends being moulded separately. There was some deformation which made the fit of parts awkward and which produces a model which is OK for wargaming, but wouldn't please a model maker.

I seem to be using phrases like 'an OK model for wargaming' a lot these days. Very often the models I purchase are a bit, shall we say, average in quality. Maybe I should send them back more often, but the modeller in me always fancies the challenge of putting them right. When buying from small cottage industry companies, I accept quality might not always be the highest, especially when prices are cheap. But when buying from sizeable manufacturers like Battlefront, I don't really expect this sort of thing. They're supposed to have quality control, for heaven's sake.

Anyway, on that sour note I will conclude. I'm looking forward to some BGB games in the near future, and I hope to report back on how they go.

Some very cool kit and as you say it's nice to be in a position where you can start filling in the corners of one's collection.
I quite like the spotter plane. Not terribly familiar with that make, but as you say it is a nice alternative to the Storch. It reminds me a little of the British Lysander, a plane I'd dearly love to have in my own kit.
Cheers,
M

May have to indulge in one.

Been looking at armoured trains as well today... Thinking of a Polish one in 20mm for giggles.

Those Zvezda kits are really superb quality for next to no money at all. Shame most of them are in the wrong scale for me these days.

The draisine is such a cool model to have. I started scratch building one in 10mm, but stopped sometime ago due to my wargames butterfly affliction...

Shame that the FoW model is rather distorted. I bought some Russian stuff a good few years ago and all of the tanks were twisted and/or warped. Simply a case of them taking them out of the moulds too quickly.

Anyway, dispight my reservations about the rules, I'm looking forward to an AAR sometime soon...

According to online sources, the Luftwaffe had 13 reconnaissance staffeln equipped with HS-126s in the Polish campaign. So it was a pretty significant resource.