I have been trying some larger SYW games over the last year, with a small group of wargaming friends attending for some daytime gaming which gives us a bit more time. Most recently I have found that I can squeeze a 10' x 6' table into my dining room, and as this room doesn't see much use, the set up can be left in place for 2 or 3 days to make the whole process of setting up and clearing away much more relaxing.

As a result of this slightly more ambitious series of games, I have felt the need for a few extra units. Some of you may remember this post, where I expressed the view that my collection was more or less complete. Ah well, never say never, especially when it comes to wargamers purchasing more stuff.

These days I limit my painting of SYW kit to the odd general or wagon, as I find painting whole units just too time consuming and tedious. A bit of lightweight painting is enjoyable and relaxing, but for me the production-line stuff is just a chore. So I ordered my new units from the current producers of my favourite RSM95 figures, namely the Dayton Painting Consortium in the U.S.A.

In this case I had to wait a few months for the figures to turn up, which I was warned about beforehand, but they have finally arrived. Using the DPC means the figures don't have to be bought separately and sent to the figure painter of your choice, and prices are excellent. Generally, one pays about £3 - £3.50 for a painted infantry figure (depending on the exchange rate), which includes buying the unpainted figure, painting, flags, and shipping to the UK. A definite bargain. I base the figures myself as this makes shipping easier with less chance of damage to the figures. The painting style is exactly what I want - basic block painting to a good wargames standard. None of this 5 levels of shading, £5-a-figure just for the painting nonsense.

Two battalions of Hungarian line infantry plus a regiment of Prussian dragoons were in the current tranche, with a further 2 battalions of Prussian infantry and some Saxon chevauxlegers to follow in a few weeks. Along with the unexpected free units acquired recently, I should be able to fill my table nicely when needed.


My basing work is pretty basic, as you can see. The bases are made from 2mm thick plastic card or MDF. Paint them grass green, a coat of PVA glue, then sprinkle on the grass flock. Done. I don't think there's much chance of a modelling article in Wargames Illustrated from me in the near future. Not quite enough content to please most gamers! 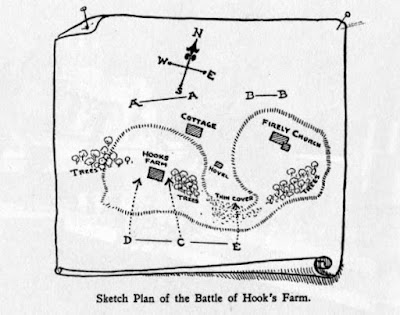 The project has now grown another branch, as Stuart is working on adapting Young and Lawford's Charge! rules for the same period. Plus he has promised to set up a proper re-run of Hook's Farm, complete with wooden building-block houses, Britain's figures and appropriate vintage guns. Oh yes, and then there's the re-fight of The Ancient Battle of Trimsos, from Donald Featherstone's original book, using the original rules. So many games, so little time...
Posted by Keith Flint at 19:14 8 comments:

As any wargamer knows, the best kind of reinforcements are the ones that come as a surprise. I was certainly surprised recently when my wargaming friend in Northleach, Stuart Asquith, offered me a whole drawer-full of tricorn-wearing figures entirely for free. Stuart is in the process of thinning out some of his current collection, and has sold many of them, but decided this lot would be a gift. I was bowled over by this act of generosity from someone I have only known for few months - thank you Stuart.

As the pictures below indicate, this is not a collection of battle-scarred veterans from way-back. These are beautifully painted 25mm figures in mint condition, mostly organised in units of 18 figures, which suits Honours of War perfectly. What was particularly intriguing is that Stuart had forgotten which manufacturer's figures they were (both plastic and metal figures are present), and he had painted them in various fictional uniform schemes just for the pleasure of creating colourful units. Immediately, the idea of developing a group of units that were fictional but fitted into a believable SYW narrative was born.

Stuart finishes all his troops in gloss varnish, and the units were based to allow single casualty removal à la Charge! rules. I had the briefest of notions to give the figures a coat of matt varnish to match my own figures, and prise off the individual castings to rebase them. Such sacrilegious thoughts were soon abandoned. The figures look wonderful in their glossy coats, and they wouldn't be Stuart's figures if given a flat finish. As for the basing, this had been done so well that re-basing would be an equal mistake. Stuart had given each figure a 20mm x 20mm space, which fits my basing scheme exactly. Some thin plastic card is already ordered, and the current bases can be glued onto 40mm x 40mm squares of this material to bring them together.

With that decided, an extremely pleasurable afternoon was spent inventing a set of suitable backgrounds for the new units. Some of them received new flags as a result, but that was about the limit of my 'conversions'. The results are described below.

So there we are - 8 new units for the table, ready in an afternoon. Can't wait to get these guys into action. Thank you so much Stuart, this was a much appreciated act of kindness.