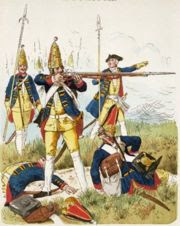 I have mentioned many times on this blog that I often find painting a chore, and as a consequence what little painting I do proceeds slowly. I only paint when I feel in the mood for a little zen-like escapism, preferably when alone in the house in a nice calm atmosphere (even though I might have Rage Against The Machine playing in the background). And almost never more than an hour at a time.

Even making allowance for this attitude, these guys have taken a long time coming. In fact, I promised them to myself at the end of this old post, from March 2011. So that's over a year to paint 20 figures. Is this a record?

Alright, a trickle of other stuff has emerged in the meantime, but this remains a remarkable level of slowness. I liked the way the figures looked when I finished the first base (painting by fours is the only way I can make creating a unit bearable), but boredom quickly set in. I either did nothing or painted something else. Losing interest in all aspects of the hobby over the autumn/winter of 2011 didn't help either.

But finally here they are. The picture above shows the battalion as they were in 1745. By the SYW most sources agree the gaiters were black, except possibly when on parade, but I wasn't going to let historical accuracy get in the way of creating a distinctive elite unit. I allowed the officer figure black gaiters as a special concession! As I mentioned back in 2011, this wasn't your usual converged grenadier unit - it was a battalion made up entirely of grenadiers, derived from the unit of 'giant grenadiers' created by Frederick II's father. Hence they all have the same uniform and they have a flag. As to whether they should be called the Garde-Grenadiers or the Grenadier Garde - well, I leave that to the experts. 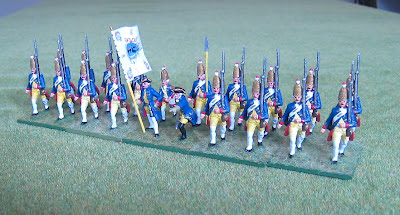 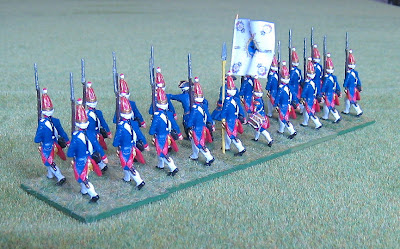 Painting is in my usual toy soldier style. Block painting only, using Vallejo and GW acrylic paints with a coat of matt acrylic varnish to finish.

IR6 in Black Powder
I give this battalion the following stats: HTH 7, Shooting 3, morale 4+, stamina 4. Special rules: first fire, superb drill, elite 3+. My normal grenadiers are the same, except they only get elite 4+. I have backtracked on my earlier conclusions and now give all Prussian formed infantry a shooting value of 3, in line with the rulebook.


I have the unpainted figures for a couple of units of hussars waiting, which I suppose I will eventually get around to painting. My cavalry units have the great advantage of usually only having 8 figures. Whether I will ever be able to face painting a full infantry unit again remains to be seen. Maybe a small (16 figure) unit of Austrian grenadiers to finish off that army. But the extra Prussian line infantry I fancy acquiring will probably be bought ready painted from RSM - their prices are excellent and the paint standard quite acceptable.

I guess this one goes out to block painters everywhere. Keep on keeping on!