As I write, part 1 of this post is still showing amongst the Popular Posts in the side bar. It seems nearly 4 years has passed since I promised a post describing the refight of this battle. I guess some sort of apology is called for. The delay was occasioned by the fact that, well, no refight has actually taken place until the present time. As to why - I'm at a loss. I guess the project just fell through the cracks.

Rediscovering the battle again, I found I wanted to tweak things a little. The first was to twist the battlefield a bit more anti-clockwise to provide more space for deploying the Austrian attackers, and remove the northern end of the Kuppritzer-Berg as my table was now only 7.5' x 6'. Its presence was unnecessary anyway: the attacking Austrians were only spotted at the last minute by the defenders, as they were attacking in fog and at night. This brought my table layout much nearer to the map used by Olicanalad in his refight, which he did in 2009. Yeah, I should have paid more attention to the guy in the first place.

The forces were tweaked as well, and as I'm now using Honours of War instead of Black Powder, some of the special rules also changed. Each unit in the game represents around 5 actual units. 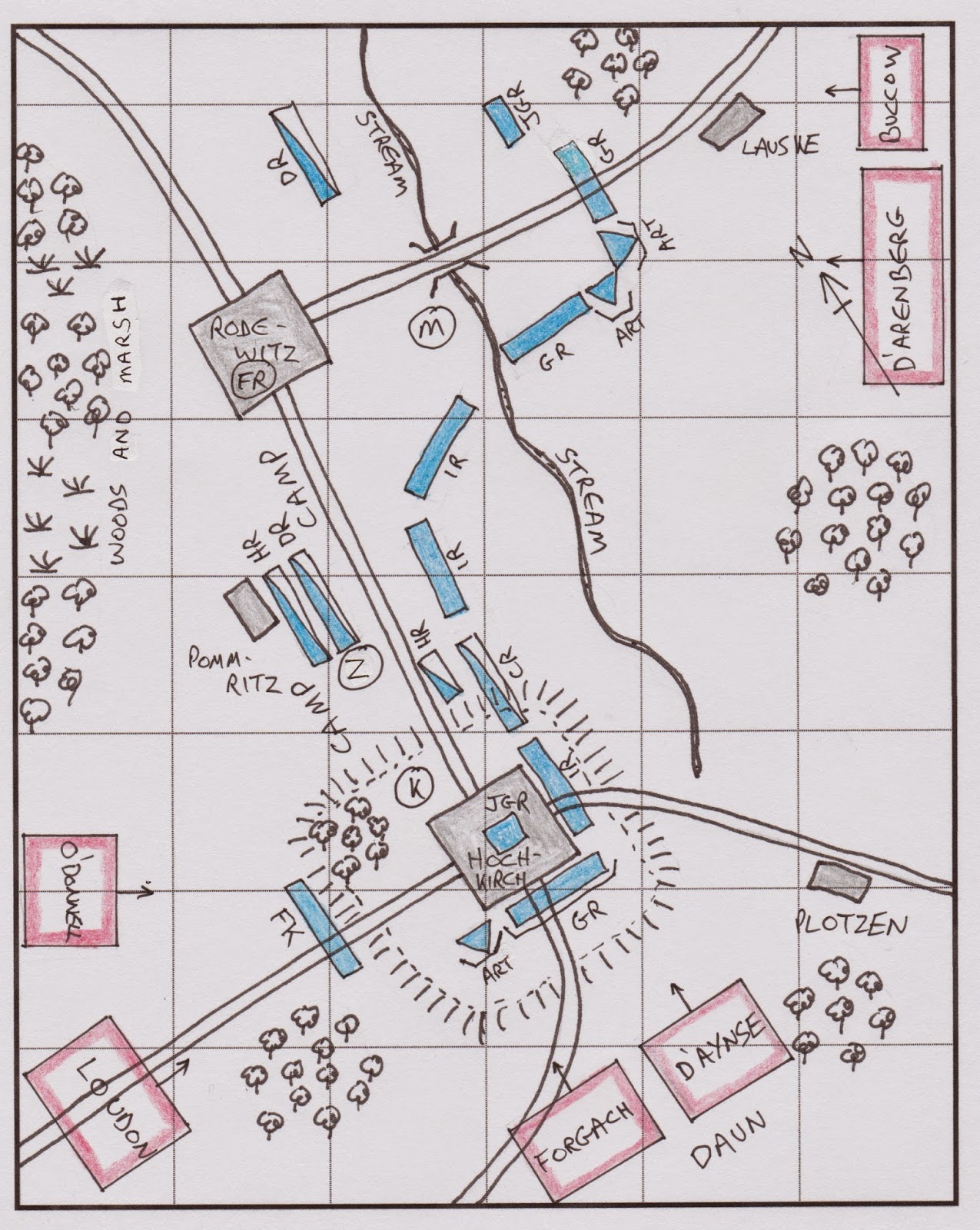 The battle starts at night. The first 2 moves use the fog rules with visibility at 20cm, moves 3 and 4 use the normal fog rules (visibility 30cm).

The Austrian corps of D’Arenberg and Buccow do not deploy until the beginning of move 5.

Prussian gun batteries defeated in melee may be captured and used by the Austrians.

Hochkirch and Rodewitz are each worth 1 army point.

Victory conditions
The scenario means that the Prussians have no chance to defeat the Austrians in a conventional sense. They were thoroughly surprised and outnumbered. To give the game meaning, the following simple rules allow the Prussian commander to emerge with honour if he plays well.

If the Prussian force can remain unbroken until the end of move 8, a draw has taken place. If it has also inflicted 25% casualties on the Austrians, the Prussians have won.

My Life As A Bathtubber
I was uncertain how well this game would play out. Maybe the process of 'bathtubbing' had gone too far (see part 1 for the background to my doubts). In the end, however, it was one of the most enjoyable games I have played for some time, with non-stop action across the table and a credible result. Those who criticise bathtubbing (letting one wargames unit represent a number of real units, but keeping the rules exactly the same) often cite the fact that the ground scale is completely thrown out by this process. They are, of course, completely correct, but somehow games played using this process have a habit of turning out perfectly well. Exactly how this works remains a mystery to me. Perhaps the most well known current proponent of this approach is Charles S Grant, with his Wargaming in History book series. Those lucky enough to have a copy of Henry Hyde's Wargaming Compendium will find the process explained on pages 291 to 293.

If this battle interests you, it is worth checking out Olicanalad's refight already mentioned. The best online source is (as usual) the Kronoskaf website. I'm hoping I will get the chance to replay the battle again - it was fun and absorbing. I'm also hoping it won't take 4 years to set it up.

I recently came across these Hotz Flocked Felt Fields, from the same people who produce the wargaming mats, of course. I was interested in getting some to break up the plain green of my wargaming table, especially now I am trying out an S&A Scenics felt wargaming mat.

They are made to order, and Hotz are based in Canada, so be prepared to wait 2 or 3 weeks for them to arrive. The website says they are posted out rolled, but mine arrived loosely folded. There was some light creasing, but a bit of gentle counter-folding was all that was needed to sort this out. There is an advice sheet sent with the product that tells you the best way to cure any problems with gentle ironing if you need to.

The mats are treated and flocked, and seem to be very durable - there was no shedding of flock evident during shipping or during my bit of counter-folding. I selected the '20-30mm' size of fields, and I got a standard set of 4 fields, each in a different colour. Sizes were roughly 35 x 27cm, 28 x 23cm, and 2 small fields each 14 x 11cm. They do lay nice and flat, and overall I am very pleased with them. They look fine as they are, breaking up the plain colour of my table. But of course combining them with trees and hedges or walls  would be great too. They would follow an uneven table up to a point, and could be used across simple, straight hill contours.

Pricing is very reasonable in my opinion - $16 for the mats and $8 postage.


I heartily endorse this product!
Posted by Keith Flint at 21:09 10 comments: