A Pleasant Surprise
The very lovely Richard Couture at the Kronoskaf Seven Years War website has made this blog his Website of the Month for December, which is very nice of him. If you are visiting as a result of this, welcome.
If on the other hand you have an interest in the SYW and haven't yet found the Kronoskaf site, I recommend it unreservedly as an outstanding source of information on this particular era of military history. It is also constantly being improved and updated.

The Roaring Inferno of Industrial Wargaming
Now, being nice is all very well, but I have a set of rules (specific to the Seven Years War) to perfect before the end of January next year, and I need your help. Below you can see the cover artwork for Honours of War, to be published next year by Osprey Wargames. Regular visitors know all this already but I'm hoping to interest new visitors prompted by Kronoskaf. 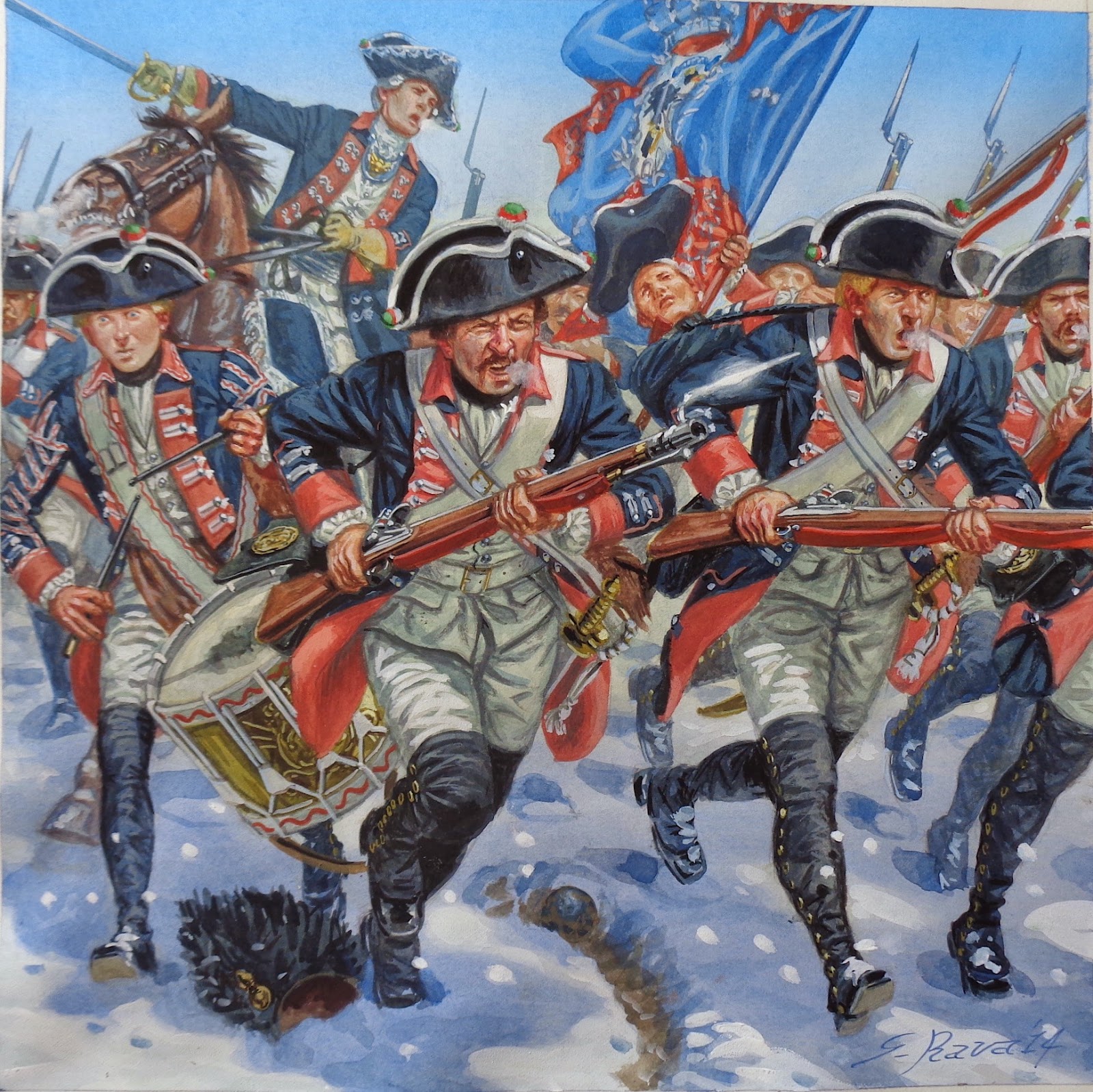 So, regular visitor or new one, I'm hoping you might want to take a minute to visit the Honours of War Yahoo Group. Members of the group have been very helpful in ironing out a few problems and suggesting improvements to the rules, but things have been a bit quiet of late and some new blood might be just the thing. The rules plus a playsheet and some explanatory diagrams can be downloaded from the files section.
Anything from first impressions following a quick read-through to the results of a full playtest will be gratefully received. Or, if you're feeling nasty, just download the rules and avoid paying for them when they come out. What the hell. Although you will miss a very reasonably priced but excellent quality booklet with some very nice illustrations.

Ooh! Nice!
The rules will be one of the current 'Osprey Wargames' series, retailing at £11.99 at present, which I reckon produces a great balance between an affordable price and a well produced product. And regarding those illustrations, below find a teaser of the quality of photos you can expect. These crackers have been provided for us by James 'Olicanalad' Roach, whose website was the first ever Kronoskaf Website of the Month. Enjoy, and I hope to see you on the Yahoo Group.

Toys On The Table

My ambition to complete my SYW collection before the end of the year is largely fulfilled. Of course, as a red-blooded wargamer I hold to the faith that no army is ever truly complete, so I expect I will find a place for the odd extra unit as motivation and money allows. But in most of my recent battles, some units have remained in their storage drawers, so significant growth seems unnecessary. I have as much as I reasonably need.


Taking stock, I felt it was time for a game that used all my units (every single figure, including civilians and sheep), both in order to see them all out on the table and to test my rules with as big a game as possible. I decided to go for a very basic terrain, and set out the Austrian and Prussian armies opposite each in other in a 'classic' (some might say 'unimaginative') encounter set up. The table size was my maximum 7.5' x 6'. Total number of toys on the table were:


My cavalry units are small (normally 8 figures each), hence the low numbers of actual cavalry figures. Overall, not a massive collection by some standards, but like most people I have my limits of time, space, money and motivation. My SYW project started in 2008, so it has taken 6 years to get to this stage. I suppose around 40% of the figures were painted by me, the rest being painted commercially.

I am currently fortunate in that the dining room at our new home sees little use, so it makes an excellent wargames room where I can set things up and leave them there for as long as I like. Hence I was able to play out my 'big battle' solo using odd hours of spare time over the course of a week or so. I was also able to take my time in taking some photos to a slightly higher standard than normal, using a bit of extra lighting and trying to improve my composition. The recent articles in Miniature Wargaming on wargames photography, authored by Henry Hyde,  were an inspiration here, though sadly top quality results continue to elude me.


Upsides
I called the game after 6 moves. Besides the fun of seeing the collection out on parade, a large game was a useful exercise for my rules. For example, I have never used a large 3 gun battery before, and it was surprising to see the effect three model batteries could have when firing together. One of the first things the guys on the Honours of War Yahoo group pointed out was that they felt artillery was too powerful. I had tended to use artillery very sparingly in my games, and so had not noticed this, but I adjusted the artillery effect down in response. I have been wondering recently whether I went too far, but this game reassured me that the playtesters had been right.

Downsides
Those unfamiliar with this period might think that a setup like this, with both sides lined up opposite each other, cavalry on the wings, infantry in the centre, was typical of the Seven Years War. Whilst such a deployment may have been the basic template, I have read of very few battles where the opposing sides ended up in such a balanced and symmetrical state of affairs. Terrain and other circumstances created all sorts of battle situations, especially due to the common tactic of trying to outflank your opponent with at least part of your force. So the setup was not particularly representative historically.

In wargames terms, despite looking attractive, such a setup didn't make for a very interesting game either, even taking into account that it was just a solo test game. Neither side had much alternative but to advance forward and hope for the best. An interesting wargame needs to provide for a bit of manoeuvre, with some open space to exploit and choices to be made. In this game, both sides had to be so cautious that the infantry didn't even get round to engaging during the 6 moves played. The almost completely open terrain didn't help matters, but it was worth having a game on such an open plain to see how it affected game play.

And Finally - A New Wargaming Mat
The Games Workshop Battlemat is a very good product - durable and easy to use. I have been using 2 of them for a while now, and you see them in the photos above. The two problems are that, one, they seem to be no longer available, and two, although advertised as 6' x 4' they come out at a couple of inches short of 6'. On my 7.5' x 6' table, I end up with a white strip along the baselines, as well as a join along the middle. Call it the effect of OCD, but having seen an S&A Scenics mat at a show recently I decided to get an 8' x 6' one which would cover my table completely and uniformly. The mat is plain green felt, and you see it below just unpacked, before I try to iron out the packing creases (iron not too hot, and don't use steam - any escape of water will stain the cloth). I like the nice bright green colour and the broadly Old School look it gives. Usefully, the mat is a generous 2 to 3 inches over-size in both directions. Total cost £38 including p&p.

And that's it for this post. Thanks for visiting.
Posted by Keith Flint at 18:31 16 comments: