'Miniature Wargaming The Movie' - Whatever Happened?

One or two of you may remember a post from February this year which I called 'Why We Wargame'. The post had some interesting responses, but its inspiration was a documentary film called Miniature Wargaming - The Movie'. 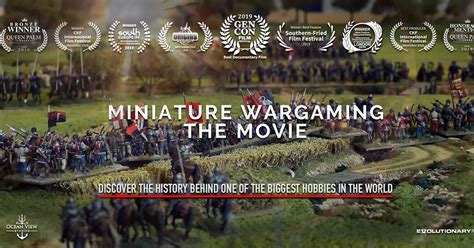 I was fascinated by the concept of the film as soon as I learnt about it. Like many wargamers, my first reaction was - you must be joking. Closely followed by - I bet that will be a heap of crap. But I have learnt during this year that what resulted looks like a thoroughly professional, eye-catching film that really sets out to say something about the hobby.
Fortunately, it wasn't the film a lot of gamers seemed to want - a history of the hobby along with details of how miniature wargames are played, a film that would have been of interest mostly to people who are already wargamers. Instead it seemed to focus on what the hobby (and by extension all hobbies) meant to people and how it affected their lives. We all spend a fair amount of time thinking about and participating in our hobby, so why not take a bit of time to think through why we do it?
The film clearly concentrated on British gamers and the British hobby. The main problem is, the film was released in 2019, won some awards, was released to the public in the U.S, but remains unreleased in this country. As far as I'm aware, the only Brits who have seen it are those who participated in the crowd-funding which got the film made.
From what I hear and have found online, the other surprising thing about the movie is how little real interest it seemed to generate amongst UK wargamers. Here was a professional movie that was worth watching, made about our hobby, and no one seemed to care much.
So I very much hope it will be released soon in this country. In fact, I emailed director Joe Piddington via the film's website to ask what was going on. He was kind enough to send a pretty full reply, and in short he is waiting on the film's distributor's in the UK to complete negotiations with people like Sky and Amazon - a process that is entirely beyond his control. Lockdown was apparently part of the problem, and reading between the lines I could sense Joe's frustration at the film remaining unavailable in the country of its birth. This exchange was in August, and Joe mentioned that the intention was to get the film out this year. Well, nothing yet. I can only say that as an ordinary punter it all feels a bit weird.
Anyway, my fingers remain crossed. It is sad that this film seems to have been forgotten in the UK before it even became available to watch. I hope the situation may be resolved soon, and I wish Joe all the luck in the world. Meanwhile, see this review on Little Wars TV for a bit more info and an interview with Joe.
'Til next time!
Posted by Keith Flint at 15:47 5 comments:

Shadow of the Eagles - On The Road At Partizan 2021

Thanks to Dave Ryan at Caliver Books/Partizan Press, I had the opportunity to put on a demo game of Shadow of the Eagles at the re-scheduled Partizan Show on Sunday 10th October.

Well, I and the four other gamers involved had a great day, the Caliver Books stand was busy all day, and the show itself was very well attended and had a large number of fantastic games to enjoy and inspire. I decided to put the main report on the 'Shadow' blog, which seemed the right thing to do, so follow the link to see that. Just a couple of photos below to whet your appetite.
For those interested in the wider show and the fabulous games being demonstrated, as well as a fine report on our own game, I can do no better than direct you to Steve's Wargaming Addict blog. Well done as usual Steve in creating an informative and nicely photographed record of the day.

So head over to the Shadow of the Eagles blog for my take on the day. Thanks to Steve, Jon, Paul and Roland for making the day so enjoyable and the game so easy to run.
Might be time for a brief rest from Napoleonics, so look forward to posts coming up on SYW battles and maybe some WW2 or even ancients. Could take a while though!
Go well 'til next time.
Posted by Keith Flint at 12:07 2 comments:

So the day finally came, two years after the last event.

Thanks to the very co-operative caretaker of the hall, I had been able to get all the tables set up the evening before, and so arriving at the hall around 08.15 to make the finishing touches was much less stressful. By about 10.30 we had 29 people in the hall, and there were two or three visitors who popped in later, so overall numbers were the same as in 2019.
There were 8 games, 6 in the main hall and 2 in the side room. It was interesting to have 4 big games present, all using 12 foot long tables. There was still room for a couple of extra games of average size, so there is room to expand the event in 2022. Unfortunately, three games were cancelled before the event (all for very good reasons), so we could have had an even busier day this year. However, I also concluded that expansion beyond about 10 games and maybe 40 people would make things too crowded and intense.
Overall, the day couldn't have gone any better. Everyone seemed to be relaxed and enjoying their gaming, and everyone found time to chat to old friends and new acquaintances. It was a lovely atmosphere and I thank all the participants for coming, especially during a fuel shortage!
The Scene
Evidently I was getting a bit over-excited, as my photos weren't really up to scratch. Particular apologies for the photos of prize winners which look like they were taken on a 1970s Instamatic (if you remember those). We can start with a basic trip around the hall.

The Winners
I think everyone was a winner on the day, but I like to have a light-hearted prize giving to say thanks to those who take so much trouble to put on games. I have kept in touch with Stuart Asquith's son Tom, and was delighted when he agreed to come along and present the prizes, as his father had done 2 years ago. Tom also judged the prizes in conjunction with myself and Jon Billington. Thank you so much Tom.


Eye Candy
Pictures of rather better quality are available at a couple of other blogs, Wargaming Addict and Battlefields and Warriors. Below are a few close ups of some of the action, and pictures of gamers enjoying themselves. Which is always good.

The day flew by, and I loved every minute. So many people came up to me to say thanks and what a great day it had been that it started to get embarrassing. I think this is something clubs and groups of gamers all over the country should consider - hire a hall and invite local gamers to showcase what they're doing. It makes a great halfway house between everyday gaming and the big shows.
Partizan on Sunday. Phew! Hope to see you there!
Posted by Keith Flint at 14:31 8 comments:

Little things please little minds, they say. Well, one finds that hobbyists are often highly pleased with small things that they convince themselves will enhance their hobby. Hence my recent hankering to try out a dice tray.
Rolling my dice on the table has been good enough for me for nearly 50 years. I think the catalyst for a dice tray adventure was seeing dice trays in use during recent viewings of Little Wars TV. And then there was that advert for a dice tower that came up during a recent punt around the internet. However, I rejected a dice tower as just too intrusive. And a bit silly.
A rapid search on Google turned up a number of options, but in the end I decided to go cheap and cheerful, so not too much money would be wasted if the idea turned out to be another pointless purchase. To my shame Amazon got my business in the end - I guess Mr. Bezos needs to buy more rocket fuel at some stage. Just £5.99 for this cute little made-in-China item. It came next day and I am really quite pleased with it.

Size is about 6" x 8", which is just about right for me. Plenty of room for dice rolling without taking up too much room. It's obviously designed to be something you can carry around flat, for convenience, but I wouldn't want to keep using the poppers too much - they don't feel that solid. I'll keep it done up and ready to use. Otherwise, quality is actually pretty good for the price, with no flaws or manufacturing faults. And it works really nicely, cushioning the dice as they fall with a satisfyingly soft thud. Oh dear, I think I'm getting a little light-headed.

So, from now on, no searching for dice that have rolled onto the floor, no dice hiding under trees, and the dice you are actually rolling won't get mixed up with others that just happen to be lying around on the table. I'll be ordering a second one in time for my demo game at Partizan on 7th October.

Exciting Times Ahead
On the subject of Partizan, I have two big weekends coming up - the Cotswold Wargaming Day on the 3rd October, then Partizan the following Sunday to do a Shadow of the Eagles demonstration game. So look out for reports on both of those in the not too distant future.

'Til then, go well, and good gaming.