Before the post, a thank you. Following a recent comment famine, the last 12 hours has seen a record 7 comments and 3 new followers. Well, 6 comments really as Steve Johnson posted the same comment twice. I think he realised I was feeling lonely. So thanks to all who posted and those who became followers. I hereby promise to leave more comments on other people's blogs.
To keep the party atmosphere going, I have added the proper 'Follower' widget so all followers get their logo at the top of the page. And to celebrate, what better than another post?
Howitzers in Black Powder
The photo shows a couple of howitzers recently acquired from (you guessed it) the RSM95 range. Austria to the left, Prussia to the right. 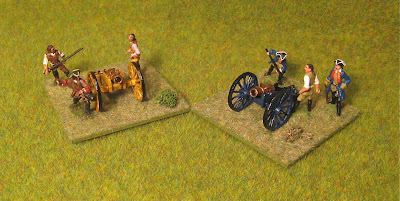 Checking the howitzer rules in BP I found that they make howitzers handy things to have, but the rules also have some misconceptions about the capabilities of these weapons. The basic mistake seems to be that howitzers are lumped in with the very different mortars. Viz:
1. All mortars and howitzers have a minimum range of 6"... This is simply allowing the room for the shell to reach the top of its trajectory before falling upon the target. (p.81).
Reasonable for mortars but quite incorrect for howitzers. These were perfectly capable of firing on a flat trajectory (sometimes using their shells for ricochet fire just like cannonballs) and were furthermore very effective users of grape or canister. So it is appropriate to use the same rules for fire within 6" (i.e. short range) as for ordinary guns.
2. Ranges have been fixed at somewhat less than equivalent cannons... (p.81).
I have found no real evidence for this. For example, in the SYW period the ranges of the Austrian 6pdr gun and 7pdr howitzer are comparable. So my smoothbore field howitzers get a range of 48".
3. Enfilade Fire... [not allowed to] cannons firing overhead at a target, or howitzers or mortars that lob their shots upon their target. (p.55).
For overhead fire in general or mortars, quite right. But again, howitzers were capable of (and commonly used) low trajectory fire, including canister. Either allow enfilade fire for howitzers as normal, or allow it for howitzers firing at up to half (or 'medium') range.

4. As mortars/howitzers have an explosive or incendiary shell, they inflict the same amount of damage regardless of range. These weapons therefore have the same number of attacks at all ranges as shown in their profile. This is normally 2 for a smoothbore field howitzer. (p.81)
A sensible seeming rule, but I can't find any 'profile' for howitzers in the rules. The only stats example that has howitzers (p.169) keeps standard gun stats of 3-2-1. I presume the above rule means that BP would give pure howitzers stats of 0-2-2, whilst my comments under 1 above would mean you should really use 3-2-2. However, this raises the question of why all guns in a SYW army weren't howitzers, if they were so effective. Well, Frederick II for one was pretty keen on them, but the point remains. Therefore it might be better to leave howitzer stats at 3-2-1, reasoning that it was much more difficult to hit at long range and that therefore casualties caused at long range would be less, as with guns but for slightly different reasons.
I am pretty confident that the above objections are watertight, but as always comments are not only welcomed, they are positively encouraged.
Thanks again to all readers.
Posted by Keith Flint at 21:48 9 comments: 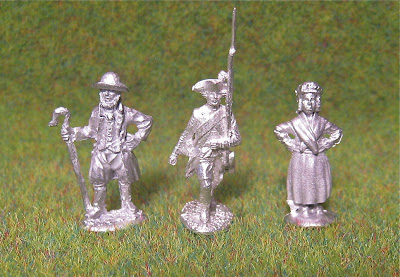 Practical Wargaming - Bargain of the Year

Back in October 2008 I published a post on Charles Wesencraft's Practical Wargaming. It was not in my collection of wargaming classics at that time, but I recently decided that it was high time I obtained a copy. The book is of course easily available as part of John Curry's 'History of Wargaming' project, but I hope John won't be offended if I say that owning an original copy was my preference, even if I had to pay a bit more. Digital reproductions are a great idea for keeping these old books in print, but the resulting books themselves lack the heft, character and production quality of the originals.
Fortunately it seems there are still plenty of old copies of this book around. Imagine my surprise on finding a copy available for £3.30 (plus £2.35 postage) from a seller on the Abe Books site. 'Acceptable quality', the ad from the seller said, so I ordered it expecting a tatty copy, probably with no dust jacket. As you can see, I received a fully jacketed ex-library copy in what I would call very good condition. 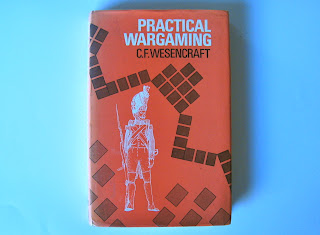 Hats off to The Perfect Book Store.com for providing such excellent customer satisfaction. There are plenty of copies on Amazon and Abe books for £20-£30, but this is a genuine bargain. Some sellers are trying to rip people off for £50 or more! 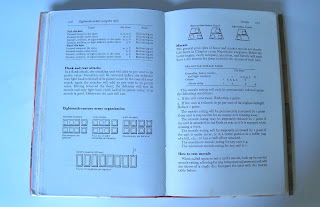 I had forgotten the book had a chapter dedicated to rules for the eighteenth century. Much joy! They look perfectly playable and I'm certainly tempted to have a go. There are a couple of errors - Mr Wesencraft seems to have got the idea that infantry battalions in this period had light companies as in Napoleonic times (see photo of text above), and also that dragoons 'usually chose to move on horseback to a given point and then dismounted and opened fire with their muskets'. Not very SYW I'm afraid. Hussars also don't get a mention. But these are acceptable faults in a book which must have been cutting edge in 1974. All the rules (there are sets covering 7 periods from ancients to the Franco-Prussian War, plus a campaign system) are well set out and easy to understand. The underlying principles are clearly explained and there are diagrams and photos to help you out. The basic simplicity of all the rules will ensure fast play. All this plus the most charming and well written introductory chapter you'll find in any book on wargaming. An outstanding piece of work indeed.
I will be reading all of this book. Not just for nostalgic pleasure but also for rules ideas, and insight into how simple, straightforward rules systems can be developed. I just can't quite work out why I haven't bought it sooner.
Posted by Keith Flint at 20:46 3 comments: