Chapter 1. Trimsos 3, Sittangbad 2.
...and so Trimsos go through to the second round!


Okay, so this was the third engagement in the Trimsos Project initiated by Stuart and myself, and we played the Sittangbad scenario for the second time (although for the first time in the ancient period). Our little set of rules therefore had a further playtest, with me taking copious notes as various situations were discussed. Finding someone you can really co-operate with when developing rules is a great experience - not everyone can do the give-and-take required. And of course, for ideas on an Old School-style set of rules, who better to work with than one of wargaming's great Old Schoolers? The only problem is, each iteration gets more and more like Charge! for ancients! (Only joking Stuart).

The set-up was of course inspired by the classic Battle of Sittangbad. Palm trees were substituted for those seen in the original battle, and some ruined buildings suggested Sittangbad and Eisenberg. All, as usual, on Stuart's 6' x 3' dining table.

Chapter 2. In Which I Become A Wargames Butterfly.

"Let no man set out lightly upon the war-gamer's path, for it is fraught with perils..."
Peter Young, Charge!

This whole Trimsos thing started as a nostalgia event to refight a classic wargame, but has metamorphosed into an informal project to develop and use a set of simple, Old School ancient's rules for the occasional battle. I have enjoyed the whole thing so much that I have made the momentous decision to open a third front in my wargaming, or to put it another way, I'm starting a third period to add to the SYW and WW2. I suppose I'm technically already an ancients player, as I have a couple of 15mm DBA armies gathering dust somewhere, but they were always a sideshow. It was time, I finally decided, to jump in with both feet. Why?

Well, in over 40 years of wargaming, 'Ancients' is something I have never done. Just not my area of interest. However, the Trimsos Project had a few unique features which seemed inexorably to draw me in. Firstly, we followed the example of Donald Featherstone and Tony Bath from the original Trimsos game by using ancient armies that were very much generic - that is, any figures from the ancient period would do. To use the phrase from War Games, "what are a few hundred years amongst so many?". This opened up a fascinating vista - no need to decide on a period and restrict my choice of armies to that epoch. I could mix and match whatever ancient figures took my fancy and mould them into forces balanced any way I chose. It is of course common for ancient wargamers to fight battles between armies that were not historical opponents, particularly those wargamers using the various WRG rules. The Trimsos project extends that concept into the armies themselves - units from different eras of history (roughly from 1500BC to 500AD) can fight alongside each other under the same general. All they had to do was fit into a basic division of infantry or cavalry, then either light or heavy, as used in the original Battle of Trimsos.

Another issue was that of creating armies. Stuart had got things rolling with his 'economy' armies of 20mm plastics, but I couldn't rely exclusively on someone else's soldiers if I was truly to start a new period. Not wishing to embark on a lengthy period of collecting and painting, I looked at buying ready-painted second hand figures. 15mm might have been an option that was just about affordable, but I soon realised that only 28mm would do. I would have to bite the bullet and create my own armies, or the cost would just get silly. Stuart's concept came to the rescue and made things seem do-able: there was no need to start with the 15-20 figure units used by The Don, or aspire to the 40 or 50 figure units used by Charles Grant in his 1974 classic The Ancient War Game (see chapter 3). I could get started with the 12 figure infantry and 8 figure cavalry units Stuart was using. And the selection of 28mm hard plastic figures now available would be a source of low-cost but high quality models. And, I had the modest armies that took part in the original Trimsos battle forming an achievable target. My version of these is shown below:

I don't reckon that this total of figures (around 150, plus chariots, elephants and war engines) should be too great a target. The secret is to to enjoy the process of creating the new armies whilst also continuing to enjoy the periods I am currently playing.

I also decided to proceed cautiously. There would be no silliness involving buying hundreds of figures to produce a 'plastic mountain' which I would then laboriously work my way through. I would buy my figures in modest batches which I would paint up before buying more. In particular, if the whole process got too much and I lost interest, the stuff I had already painted could be sold at a profit on eBay. Having checked out what was available with some online searching, I decided to start by purchasing a box of Victrix Athenian Armoured Hoplites. That gave me 48 first class figures for £24. Do the maths - I thought that was good value. I've been getting on with them and here are some photos:

The final plus of this project (so far) is the pleasure of creating the rules. Of particular interest is the process of sticking to the simple, original concept whilst writing rules that don't feel anachronistic to modern players. Hence, for example, troops will be 'light' (or 'skirmishing') or 'heavy' ('formed') only. Also only straightforward, unashamedly old-fashioned combat mechanisms will be used, along with a basic move-fire-melee turn structure. And no modern-style command and control.

I have been trying to make up a strapline for this project, and so far I have:
You get the picture. This is not the game for dedicated ancients fans. History will be toyed with and often just plain ignored. Forward to the 1960s!

Chapter 3. A Book of Two Smells - The Ancient War Game, by Charles Grant.
However gently I'm taking this project, no wargaming that I take part in will ever miss out on the opportunity to buy books. This one I found I couldn't overlook, as it combined some fine old games with a description of the various main eras and countries that make up the ancient wargaming period. It cost me £25 on Amazon, including p&p. A fine read, in Mr Grant's usual avuncular style. 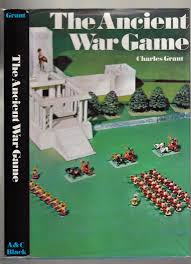 Two smells? Well, first the lovely small of an old book - don't you just love that aroma? And secondly, the smell of When Wargaming Started To Go Wrong. Charles Senior is immensely pleased with the rules that had taken ancient wargaming by storm in 1974 - those of the Wargames Research Group, in their 3rd Edition when the book was written. "Certainly, any improvement could only be trifling", he states triumphantly. Ah well, 4 more editions were to come, then DBA, DBM, DBwhatever, etc, etc. As an exercise I downloaded the WRG 3rd Edition rules, which are still available on the internet (thanks to the History of WRG page). Frankly, I am happy these have been consigned to the dustbin of wargaming history. Reading them brought back memories of watching WRG ancients games at the Southampton and Bath clubs back in the 1980s - mostly, the games seemed to consist of people compiling lists of plus and minus factors on pads of paper every time firing, melee or morale were being conducted. The impression was one of extreme tedium, and was probably a major reason I never got into ancients!

To be fair, WW2 wargamers were stuck with equally awful rule sets, like the unplayable Firefly rules (which appear to been played by a fair number of people - how did they do it?). Anyway, suffice to say my own nostalgia (and I think I can say Stuart's as well) certainly doesn't include any set of WRG ancients rules, although the first edition is well worth a look for old times' sake.

The other book I will acquire in time is Tony Bath's Ancient Wargaming, published by John Curry's redoubtable 'History of Wargaming' project. Not that I'm going to start any ancient period campaigning, but I want the background to Mr Bath's wargaming world, and especially ideas for the names of countries, generals and units to add spice to my own gaming. Why copy Tony Bath? Simply as a tribute to his contribution to wargaming in general and ancient wargaming in particular. It is important to me to reference my sources of inspiration. For me, the early works of the wargaming greats form a sort of imaginary history (if you will), encompassing the beginning of the modern hobby of wargaming. Having largely set aside real history, keeping in touch with this spirit is a vital part of the Trimsos Project (at least for me. Stuart probably thinks I'm nuts).

Anyway, Christmas is coming up, so no need to buy straight away!

So, it seems a lot of threads are coming together to make this new venture inspiring. I have high hopes, tempered with a reasonable amount of caution. I will of course keep you all posted.