The Last Argument Of Kings

Ah yes. It was nearly three years ago that I wrote a 'jaundiced and curmudgeonly' post regarding this supplement to the Blackpowder rules. It was the first such supplement to come out and I did not welcome it, arguing in particular that the useful material (excluding the pretty pictures and fluff) should have been in the original rules. I also said I wasn't going to buy it.

Well, here I am in 2014, and the book has recently been bought and digested. Mostly, I wanted it because I am desperately consuming anything I can get hold of on the Seven Years War, what with Honours of War coming out next year (fingers crossed). So it seemed appropriate to post a modest review here. My blog statistics clearly show that my old posts on Blackpowder continue to be regularly visited, so some of you out there may find my comments of interest. And the question I posed in my 2011 post ('won't such a book be a great introduction to the period for newcomers?') could do with an answer. And I'm afraid the answer is, 'not really'.

The good points first. I congratulate the author on including sections on the Great Northern War and the wars against the Ottoman Empire, particularly the latter which is a much neglected subject. Mr Brown has also taken the trouble to broaden the value of the work by having a section on 'War in the Colonies' (basically the French-Indian Wars, but supposedly covering 1700-1775) and a further section on 'Raids and Invasions', which gives ideas for amphibious scenarios. Furthermore, the section on the 'Wars of the English Succession' has a campaign for the 1745 rebellion featured. These are all good attempts at adding value and making the book worthwhile.

The first reason for my reservations is that I found some of the historical information misleading, and occasionally just plain wrong. Naturally, for me such reservations centre around the period I know most about (the SYW), but finding questionable statements in these sections reduces my trust in the information presented for other periods with which I am less familiar. I think the main problem is that too little attention is paid to the changes that took place as the century progressed, particularly in the army lists. To summarise the technical points I noticed:

Artillery. Positional artillery is unfairly described as incapable of movement on the battlefield in the introductory section (p.11), and this conclusion is cemented by the unhistorical special rule that foot artillery, once deployed, must remain in place for the rest of the game (p.19). Not even fair in the early part of the century, this is plain daft for the SYW. A comment in the description of the Russian army that 'during the SYW, Russian artillery was widely regarded as the best trained and equipped in Europe' I also found questionable. I think it was the Austrian artillery that took that accolade.

Cavalry. All the army lists (except the Jacobite one) cover the period 1700-1775. The weakness is that change over this period in the various armies is often poorly catered for - generally, one list fits all. This is an all round failing, but was particularly evident to me in the bland description of the Prussian cavalry, which was actually very different in 1740 to what it was in 1756. The author also gets the merits of the Austrian and Prussian cavalry the wrong way round for the SYW, in my opinion, particularly concerning the hussars. It was the Prussians who generally had the advantage.

Infantry. A strange omission in the Prussian army lists are the famous Prussian grenadiers. There's the Garde, and the line infantry, but nothing in between.

Tactics. The panel describing Frederick's 'oblique order' will probably leave the newcomer to the period as confused as when he started.

More general failings included the section on 'putting on a large scale game', which is rather poor. There are slightly weird paragraphs on providing refreshments and background music, and interesting advice to hire a big hall because wargamers tend to be fat. But no suggestion at all as to how large battles might be scaled down to make them possible for wargamers who aren't part of a large club or group and who don't have access to very large tables.

Especially disappointing were the maps for the 7 featured battles. The book's production values are, of course, high, and there are a large number of large and colourful pictures of wargames figures. But when it comes to the maps, these are small, dull in colour and uninspiring. The maps show neither the historical deployments, nor suggested ones for wargaming. A great missed opportunity, which prompted a feeling in me that style (eye candy) was preferred over substance (detailed and good-looking historical maps). Osprey could certainly teach Warlord Games a thing or two in this department.

As a final dig, I found it insensitive and crass to head up a side panel on scalping with the feeble title 'Keep Your Hair On!'. The panel itself was mostly sensible enough, but this barbaric practice doesn't really lend itself to silly jokes.

To be fair, much in the introductory section ('Warfare In The Age Of Reason') is useful and paints a good picture of the period. The special rules suggested for the period mostly make sense and are worth having, with the notable exception of the artillery rule already mentioned. But as a supplement, this book should have concentrated more on historical detail (especially change over time) and less on big glossy pictures. Such an approach would have given true value for money. From my own perspective, this supplement certainly taught me nothing about wargaming the Seven Years War. This was one of those rare occasions when the question 'could you have done any better?' would have been answered with 'yes, probably'.

I still reckon Blackpowder are the best commercial rules around for horse and musket games. They combine a generally good period feel with features making for an entertaining game. Unfortunately the original rules and this supplement also embody the worst of the contemporary commercial preference for a flashy product above solid information.

And that's all I have to say about that. As always, contrary views by owners of LAOK are positively encouraged. Perhaps gamers with knowledge of other 18th century wars apart from the SYW can weigh in. Comments please.

What Every Wargamer Needs...

...at some time in their life, is a windmill. A model one, of course. How beautifully they set off your tabletop! And how I've resisted the need for one for so long is a mystery to me.

One problem is, I think, that sometimes the windmills people choose dominate the tabletop terrain rather than rounding it off. Using 30mm miniatures, a similarly scaled windmill is a big affair. I use 15mm size buildings with my 30mm figures, which I believe works nicely, and recently I finally came across a suitable 15mm size windmill from Ironclad Miniatures. Being a pretty basic Russian one, I thought it would fit nicely into an 18th century Central European landscape for my SYW battles.

I think I was right. The photos below show the model assembled but unpainted, and I am very pleased with it. The model is nicely cast in resin: there were no air bubbles or other faults on the model I received, and very minimal cleaning up was all that was required before assembly. The sails are a little fiddly to put together, but only a little. In fact the only fault the model has for wargaming is that said sails seem a little fragile and feel as though they might snap off easily, so care in use is required. But this is a fine little model, destined to provide a pleasant backdrop to many a future game. 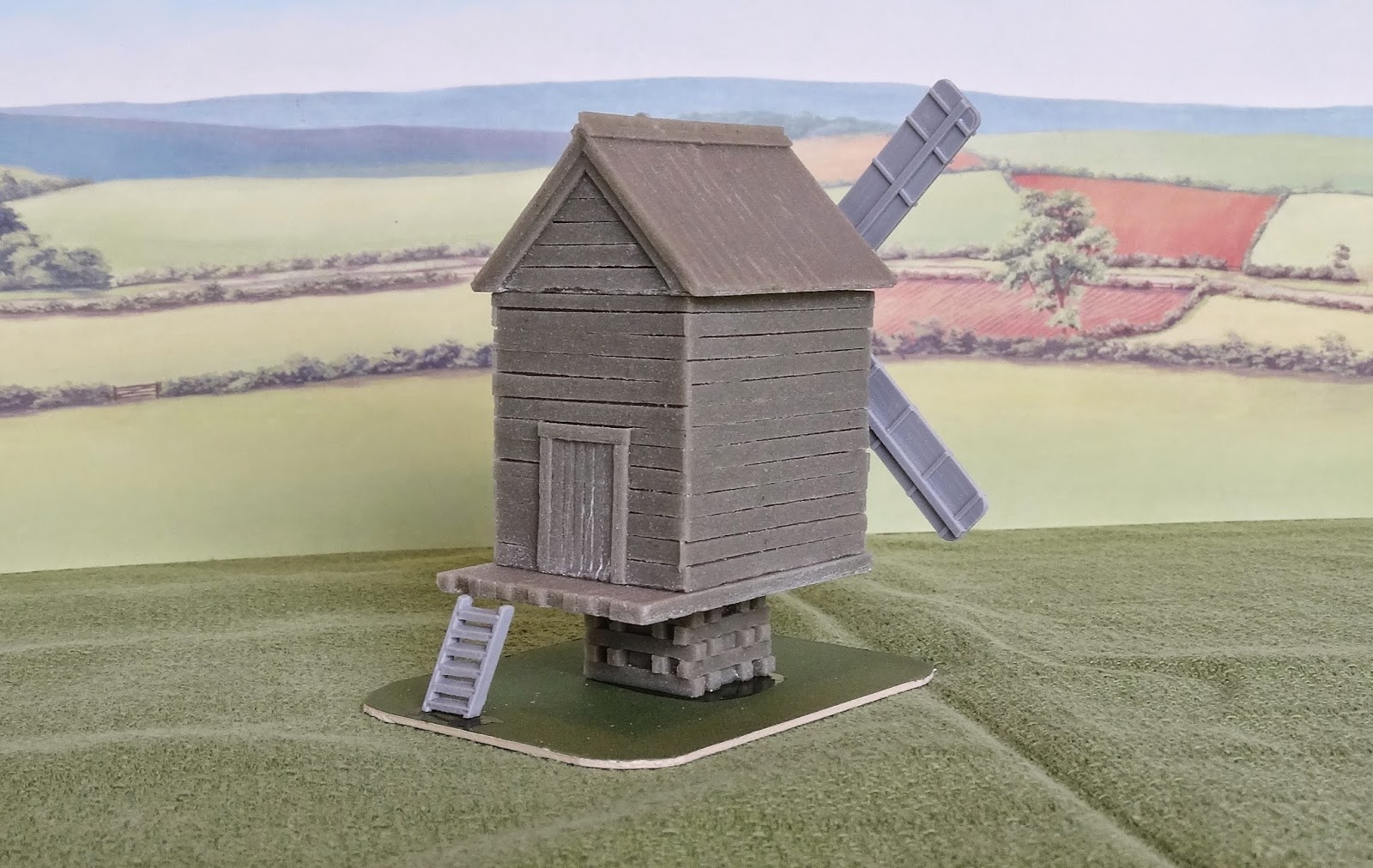 I picked up a couple of other models from Ironclad in the same purchase, plus what I hoped would be a compatible building from Hovels. I wanted to have the basis for a built up area that was of a more lightly-built and rustic nature than those I currently use, both for variety and also to have a village or small town that would provide a lower level of cover, and would therefore be easier to attack.

The buildings were the Small Log House and Eastern Front Barn from Ironclad, and the Regional Governor's House from Hovels, all in 15mm of course. Once again I was pleased with what I received. The Ironclad models come in a fairly large 15mm size, and you can see that their barn rather overshadows the supposedly grand residence of the 'regional governor', but this doesn't really worry me. The Ironclad models come with removable roofs and some detail on the inside. The barn measures around 110cm x 80cm x 55cm high, just for the record. The Hovels model is all in one piece, but standards of finish are just as high as Ironclad's. No annoying air bubbles present anywhere!

I find painting buildings so much more relaxing than painting figures - so much less fiddly, you understand. So you should see some of these buildings completed and gracing a game in the not too distant future.

And before I leave you, a reminder to SYW gamers - don't forget to visit: