The Battle of Sittangbad

So, time for some real historical wargaming again. Just for once the stars aligned and five of my wargaming friends were available for a game. The get-together was intended as a low key tribute to Stuart, so what else could I consider but a re-fight of the big battle from his favourite book, Charge!. As far as any real wargamer is concerned, of course, Sittangbad is an historical engagement in its own right. The date is given as 13th September 1766 in the book, and as the book came out in 1967 I'm convinced the battle was actually wargamed on 13th September 1966 then back-dated 200 years.

An additional attraction was that the battle could feature a number of the figures Stuart had gifted to me during our friendship, in particular all of the required command figures and all of the Imperial infantry. A downside was that my own units were a third of the size of those in the original battle. Playing using the Charge! rules would be an issue for this reason alone, not to mention that the full Charge! rules are not much to my liking and would be largely a mystery to the other players. So the re-fight would employ my own Post of Honour rules.

With smaller numbers of figures per unit, more units overall would be appropriate. I decided doubling the number of units from the original would work best, and so the orders of battle became those listed below. I managed to concoct the names for the various generals from those actually present, plus a few extra derived from unit names contained in the book.

All units were classed 'regular', apart from any cuirassiers and the Electoral horse battery who were classed 'superior'. General von Luckner was deemed to be 'dashing', whilst General Sapt was declared 'dithering'.


Scenario Conditions
The Electoral Army has a +1 modifier for initiative. The Electoral objective is to seize the east end of the Sittangbad bridge before the end of move 10. If they achieve this they have won; if they fail the Imperial Army has won. However, if either army is broken before or during move 10 they have automatically lost.
Troop conditions
Only light cavalry or dragoon regts. may dismount. Cuirassiers and horse artillery are superior, all other troops are regular.
Electoral deployment.
The light cavalry brigade, light infantry and the horse battery can be deployed on-table north of the Eisenberg Hill and Eisenwald at game start. At the start of the next turn the heavy cavalry brigade is deployed in the same area. At the start of the next two turns, one of the remaining infantry brigades can deploy in the same area.
Imperial deployment.
The whole Imperial army is deployed on table at game start, as far as possible as per the book.
Terrain
The Weser is impassable. The Sittangwald can only be entered by light infantry. The marsh is impassable to all troop types. All other hills are gentle.

The Game
As with the original battle, it was obvious that only a fighting withdrawal would offer the Imperial forces any hope of victory. Any attempt to fight a pitched battle would end in tears. For the Electoral forces, an attack down their right flank was an obvious move, as the other flank was blocked by the impenetrable marsh.

Conclusion
A neat little victory in 8 moves for the Herzog Johann, whose change of tactics reduced the Imperial army to such an extent that its withdrawal became inevitable. Well done Paul, Craig and Nick.

Thanks to all five of my guests for making the journey over and for making the game such a pleasure, with banter and good fellowship much in evidence. Certainly a game to remember, and we all hoped Stuart was looking down with approval. 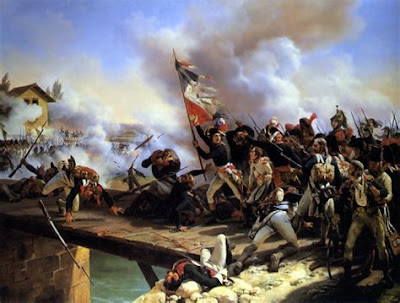