From The Particular...
In a post from April I wrote about how the unavailability of vehicle models for the 1939 Polish campaign was being solved by the growth of 3D printing. Since then I've managed to locate other sources of tanks and soft skins for this era, and this post is here to pass on links to some great 3D printing sources, and show you how I've been getting on with expanding my collection.
In April I got some great 7tp tank models from 3D Printing Valley (also check out their eBay store), and was lucky enough to get a tip regarding Paint And Glue Miniatures. Garry at Paint and Glue has a great range of Polish-campaign models, and I was able to order Vickers 6-ton tanks in both single and twin turret versions, as well as some rare soft skins and a model of the very rare TKS-D tank hunter.

As you can see, these are all very nice models indeed. Garry has twin turret tanks with both the wz.25 air-cooled mgs or the wz.30 water-cooled guns. The models match the 7tp models from 3D Printing perfectly.
Paint and Glue also do a number of versions of the Polski-Fiat PF508 'jeep', or light truck. I went for a couple each of the pick-up and radio vehicle versions.


And so to the pièce de résistance - the TKS-D. This was a TKS tankette with the superstructure cut down to take a 37mm anti-tank gun. Only 2 were converted, but they appear to have seen service with the Polish 'Black Brigade' in September 1939.

Paint and Glue also do the TKD, a self-propelled 47mm gun version of the TKS tankette, of which only one was made but which may have seen service. Models of a couple of experimental SP-tankette prototypes are also available. Plus motorcycles and other stuff. All great fun.
All TKS-D images and the Vickers 6 ton side-view were found on the excellent PIBWL Military Site, run by Michal Derela. Re-produced by permission. There is no better source (online or in print) for Polish tanks and armoured forces in 1939.
...To The General
3D printing seems to be a great new addition to our hobby. Many of you will be way ahead of me here - a Google search for '3D printing wargaming' creates access to a whole new world for a rather ill-informed grognard such as myself.
Getting into 3D printing for wargaming is really a hobby in itself, as this gentleman explains. The creation of the files required for the printers, from drawings or hand made models, is a highly technical and skilled process requiring considerable knowledge (especially of CAD techniques), and much practice. The process of printing is also far from straightforward and requires much trial and error, as any number of online 'how to' videos will demonstrate. The kit required for all this can also be pretty expensive. However, this fascinating video on creating an entire fantasy army with 3D printing indicates what can be achieved. Or check out the possiblities offered by Wargaming 3D.
Given the many difficulties of the process, I am actually quite surprised at the availabilty, accuracy and reasonable pricing of the finished models I have encountered. The quality is also improving all the time - the rather off-putting models I first encountered a year ago with their stepped surfaces seem to have all but disappeared.
For most of us, 3D printing means we now have access to a whole new world of top quality military vehicle models and model figures. The 'cottage industry' world of the 70s and 80s has returned, and our reliance on what the bigger companies will produce is dramatically reduced. Hobby enthusiasts can have a sideline that makes them a bit of money, working out of a garage or hobby room, and they can provide us with models that are usually superior to the cast metal or resin models that we have been buying for the past few decades. In this respect, the balance of power has shifted back to the grass roots, which I think is a very good thing. No doubt the bigger companies will be on to this technology shortly, but hopefully the access to smaller retailers and rare models will continue.
I have mentioned only a few sources for models in this post - many of you will know of others. Let me know via a comment if you have other traders to recommend. The most regularly publicised source I know of is Butlers Printed Models (who at the moment don't do any Polish 1939 models). I have also recently discovered Battlefield 3D with their extensive product range.
All we need now is the arrival of colour-printed 3D models. Then all that tedious painting will no longer be needed, and the hobby could really find a new lease of life. Who knows how long that will be?
'Til next time!
EDIT 14th August 2022
Check out this video from Paint and Glue Miniatures which shows how the models get produced. Certainly an eye-opener for me.
Posted by Keith Flint at 20:13 9 comments:

Just a quick shout out that the Cotswold Wargaming Day is still on, as advertised: 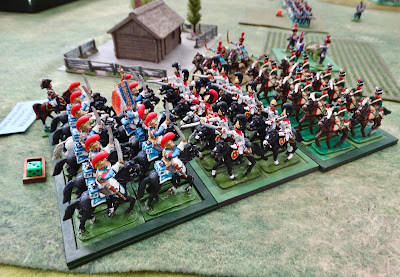 An email has just gone out to all on the mailing list - check your inboxes guys! If you're interested in putting on a game and haven't been in touch, just leave a comment. There may still be space. If you're interested in just attending - no further action required. Just come along and say hello.
It looks like attendance for 2022 should be either as good as last year or better. I'll see you on the beach!
Posted by Keith Flint at 12:31 1 comment:

Waterloo 2022 with 'Shadow of the Eagles'

Last Sunday I had the great pleasure of organising and presenting a re-fight of Waterloo at my local community centre. I won't say much here, but a very enjoyable day was had. For a full report, see my post on the Shadow of the Eagles blog:
Waterloo 2022