As promised, then, time to go back to the first week of August and a meeting with Stuart to give his new ECW armies a run out. The usual visual treat was in place when I arrived, with a fine selection of colourful units laid out on Stuart's 6' x 3' dining room wargames table. The figures were all 30mm Edward Suren sculpts, still available from Tradition of London.

Stuart had a selected a suitably old school set of rules to play with - the English Civil War rules by Bayonet Publications (author Mike Wall) from the early 1970s: 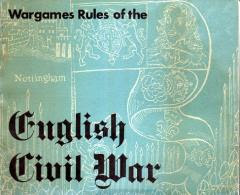 We did have some issues during play - for example, the rules used infantry units of around 40 figures, whilst Stuart had created units of 12 figures plus 2 officers and a standard bearer. But as usual, a few changes invented 'on the hoof' between wargamers of good will can quickly improve things.

I don't think there's any need to trouble the reader with a blow by blow account - we set to with the armies as deployed by Stuart and played through some moves seeing how the rules worked and admiring the figures in action. Therefore I will leave the reader with some photos, the quality of which does not do the figures justice, I'm afraid.


This was a distinctly non-competitive game, with the emphasis very much on enjoying the classic figures which Stuart had brought so successfully to life, and adapting the rules as needed. So no need for any discussion of winners and losers. I think, in fact, we were both winners, having enjoyed a peaceful and contemplative afternoon away from the pressures of everyday life.

I look forward to seeing these fellows on the table again, and getting the rules sorted to our satisfaction.

I have never really been an 'organiser' - organising trips, holidays and events is something I have been happy to leave to other people, both at work and in my personal life. But despite this, in 2018 I organised a modest wargaming event, which I have called 'The Cotswold Wargaming Day'.

I think the catalyst was having a really nice, modern community centre situated only a couple of hundred yards from my house in Northleach. A wargamer's mind never leaves his or her hobby far behind, and passing the centre regularly when walking the dogs I eventually got to thinking that the centre looked a great location for a smallish wargaming show.

My first thoughts were for a very small gathering of as few as 6-8 wargaming buddies, but initial feelers quickly demonstrated that something a bit bigger would be both possible and preferable. A meeting in March had to be cancelled due to the heavy snowfall, following which 2nd September was scheduled. To cut the story short, the meeting went ahead as planned, and 18 wargamers turned up, to take part in 6 games. In the end, my own game had to be set aside to allow the other 5 to have decent numbers of players, but I didn't find this a problem - in fact, it left me with time to join in with a couple of other games, and time to chat with the other gamers, many of whom I had not had the pleasure of meeting previously.

The good news for me was that just about all those invited turned up, and everyone who took part seemed to have a good time. Best of all was that the atmosphere was just what I had hoped for - relaxed and friendly, with plenty of people chatting about the hobby and having the opportunity to take part in more than one game. Now I've done it once, I've decided to have another meeting next year. There is room to spare at the venue, so I'm hoping to increase numbers of both attendees and games.

My photos weren't that brilliant, as I'm afraid you can see below. For better and more numerous photos check out the reports here and here. My thanks to Steve and Chris for publishing such thorough and useful posts.

And In Conclusion
I think I can safely say the day was a success. A few more gamers would have been ideal, but I decided to walk before I ran, and was cautious about spreading my net too wide - perhaps over-cautious. I'll be in touch with some local clubs in preparation for next year, but word of mouth and a few blog posts will almost certainly bring in all the gamers I need. Here's hoping.

If you want to attend, and don't already have a way to get in touch with me, leave your email address in the comments section. I'll get back to you, and delete your address from the blog straight away for privacy reasons.