The majority of you will know how dull most wargaming videos that you find on the net really are. Some tedious 'unboxing' where someone removes a product from its packaging and tells you what's inside, or a monstrously uninformative 'rules review' that consists of flicking through the pages of a rulebook whilst filming yourself doing it. And don't start me on the game reports...

Well, there is an alternative for the sane and discerning. Many of you will already be aware of Little Wars TV, but for those of you who aren't, I would thoroughly recommend you take a look. I'm not going to tell you much here, just follow the links and see for yourselves. These guys produce wargaming content that's actually entertaining and worth watching. 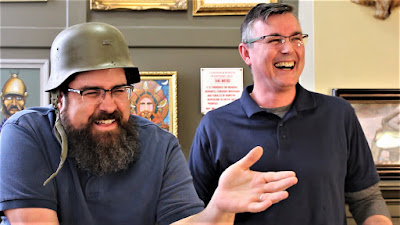 The latter is where the real fun resides, but see also the rules reviews. Yes, video rules reviews that you can actually stay awake through. I recommend you check out the Gettysburg broadcast (Episode 201), which is a remarkable piece of work for a bunch of amateurs.

Greg Wagman (the eloquent and personable guy who fronts up a lot of the broadcasts) was the same chap that did the scenarios which inspired my recent Ostrolenka post. If you haven't encountered this bunch of gentlemen yet - enjoy.
I Told You So! - 16th August 2020
It was interesting to find Greg Wagman featured in Wargames Illustrated 392 (August 2020). Funnily enough, he had written an article about making good wargame video reports. In his final tip, 'Watch Some Examples', he writes "Despite the depressing preponderance of unwatchable video AARs online, there are a number of excellent examples out there...". Yep. There are some good ones, but most of 'em, well... 'unwatchable' is what the man said.
Sometimes these things need calling out, even if it is a bit rude.

Just a quick post on a common wargaming practice, which was prompted by finding an old photo online.

So far so good. The reading I have been doing recently around Napoleonic warfare (and I've been doing a lot), commonly supports this idea. Napoleon himself spoke against artillery carrying out counter-battery fire. Unfortunately for this theory, when one turns to reading battle accounts, it is quite common to find the artillery from one side being instructed to engage enemy artillery when the enemy fire is becoming a serious problem - or indeed for artillery units themselves to engage enemy batteries on their own initiative. It is also common to find that such fire succeeded, depending of course on various factors such as the competence of the opposing batteries, their relative numbers, and any advantages of position one or the other artillery grouping might have.

So, in my opinion, the concept and practice of gaining 'artillery superiority' during an engagement was definitely current in Napoleonic warfare, and other Horse and Musket periods. I wanted to reflect this in my rules - having a nice little ding-dong between opposing batteries would, it seemed to me, add a bit of spice to a game. So in Shadow of the Eagles there is no negative modifier for artillery (or anyone else) firing at deployed artillery.

My rationalisation was that, firstly, firing in my rules (as in most others these days) is considered to represent not just actual death and destruction, but the moral or disordering effect of incoming fire - the effects of fear, fatigue and stress. As artillerymen cannot conduct their tasks whilst taking advantage of local cover or lying down, we must take account of the suppressive effect of enemy artillery fire in addition to actual casualties being inflicted.

Secondly, I started to question just how 'dispersed' an unlimbered artillery battery might be. Apart from the guns and crews, there are ammunition wagons, limbers, numerous men servicing those limbers and wagons, and of course lots (and lots) of horses. And so on this second point we finally get to the photo I mentioned at the outset. Below is a photo taken during the American Civil War of a 6 gun artillery battery and its supporting equipments deployed ready to fire:

Apologies, but that's about as big as it gets (as the Bishop said to the actress). But consider - does that really look like a 'dispersed target' to you? OK, maybe this was a parade of some sort (it is extremely unlikely to be a combat photograph), and those guns may be at less than normal deployment distance. But consider the depth of the target as well as its width.

So I think the image makes a point. There are a surprising number of similar ACW photos online - I include a few below. The first might be another view of the same battery already shown above: 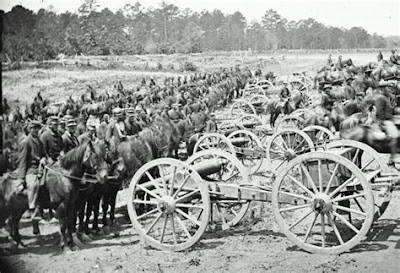 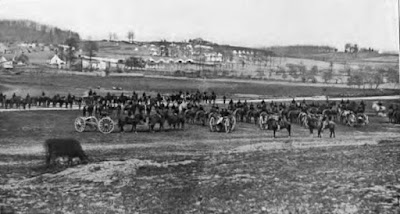 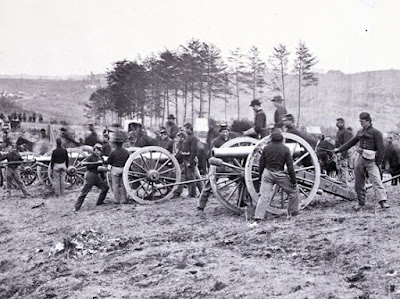 Of course, some of those photos very definitely feature artillery that was on parade. But I think there is food for thought here - and I am inclined to think the approach in my rules is correct - or at the very least justifiable.

The Battle of Ostrolenka, 16th February 1807

With the lockdown situation still preventing face-to-face wargaming, I decided it was time for a solo Shadow of the Eagles playtest. I wanted a full-blown battle, and something a bit more interesting than lining up equal opposing armies on opposite baselines.

Deciding a nice Napoleonic scenario was needed, I came up with the idea of searching Google for 'Napoleonic scenarios'. Pretty clever, eh? And what should come up but exactly what I wanted, a blog called 'Free Napoleonic Scenarios'. My thanks to Greg Wagman, who created the site, for putting in the work in the first place and making it available online, and also for allowing me to reproduce the scenario map, shown below:

The scenario I chose is based on The Battle of Ostrolenka, which took place in the aftermath of the famous Battle of Eylau. Greg admits in the background to the scenario that it has been massaged a bit to make for a better game - which is entirely sensible. I did my own bits of massaging, mostly as the online scenario is for Age of Eagles, a set of rules which allow for multi-division battles. For my own rules, divisions would have to become brigades unless I wanted to have a very large table (which I didn't) and lots of players (which I didn't have).

Add to this mix the fact that SYW figures would stand in for Napoleonic French and Russians, and this becomes very much 'A Battle Based On Ostrolenka But Only A Bit Like It'. Nevertheless, the scenario (as you will see) makes for an interesting clash which would test out my rules nicely.

Russian, General Essen. Orders - 'Capture Ostrolenka and drive the French from the field'.

For the appropriate Russian flavour, one of Sedmarkatzki's Hussar regiments should be Cossacks - but I decided to just use Hussars as I didn't have suitable figures.

An indecisive game, with casualties on both sides light. It was interesting to see that when both sides deploy skirmish screens, a drawn out infantry firefight can result (as occurred north of Ostrolenka). Historical, but a bit dull! I called the game a draw, but it had been a most useful playtest.

I thought the scenario itself was excellent, providing plenty of manoeuvre and requiring constant decisions from both sides. It would certainly play much better with 2 or more players, rather than my enforced solo try-out. Thanks again Gregg.

WARNING: This post contains no information or photos relevant to Airfix kits.

Well, that's got the disclaimer out of the way. Despite the absence of Airfix kits in this post, I thought I would include an update on the closing stages of this enjoyable project. Part 1 of the posts regarding this project ended with a photo of my unmade Revell kit of a Vought Corsair. I am happy to report that this model is now made and the original 5 models are now finished. 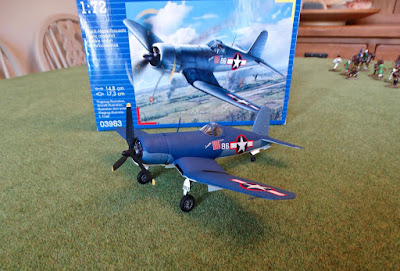 I'm afraid the Light Tank Mk.VI that I mentioned has been binned - making it was fun, but then I got to all the fiddly transfers and kind of gave up. The vehicle wasn't really part of the project and I didn't want another model needing to be dusted and taking up shelf space.

There has, however, been a further significant development. Some of you may have noticed the comment on the previous Airfix post from Steve-The-Wargamer, in which the absence of an Italian WW2 fighter was pointed out. This made good sense to me, and I have been investigating the Airfix G.50bis model, especially one in 'bagged' form. Unfortunately these seem to be about £25-30, mostly on ebay, and I felt I couldn't justify this at a time when my wife and I are trying to save money following my furloughing from work. But then, what did I come across online but a model of a much better Italian fighter - the Macchi C.202 Folgore.

Even better, this was a 1970s boxed kit from FROG. Ah, FROG - that name got my nostalgia meter swinging towards the red. Cost? Fifteen quid including postage from the fine people at Kingkit. It seemed an excellent way to finish up the project - I had pretty good memories of making the old FROG kits, as they often tackled the more esoteric aircraft subjects. I still fondly remember making their 'Gloster Whittle' kit, which lingered in my collection long after many others had been disposed of.

So the order went off, and as soon as I received it and opened the parcel I was very glad I'd made the investment. Here was more nostalgia, in spades. Anyone remember that the old FROG boxes opened out into a 'working tray'? I kept my modelling stuff in one for years when I was a lad. 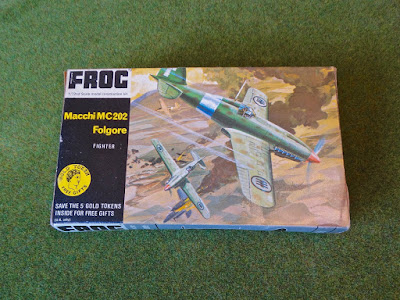 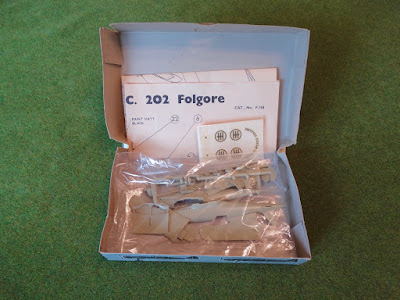 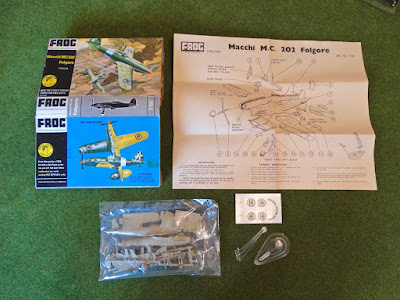 What impressed me in particular was the high quality of the model itself - lovely moulding, no flash, good fit of parts. Good service as usual from Kingkit - I recommend these guys if you yourself fancy a bit of plastic kit nostalgia. A nice website, reasonable prices and every kit checked for completeness.

Can't wait to get started!