Once again my latest battle report is from an afternoon visit to Mr Asquith's dining room. Most of my own wargaming effort recently has been devoted to building up my Ancient Period armies, and games at my own house have been conspicuous by their absence. I hope that may change soon, but for the moment a monthly fix of Old School gaming at Stuart's is most welcome.

This month Stuart suggested playing H.G.Wells' Hook's Farm battle using Britains 54mm metal soldiers. How could I refuse? For some background on Stuart's current gaming outlook, check out his article in the latest Wargamer's Notes Quarterly (issue 2), available free on request via the email address given in the linked blog. For the moment, below is the map of the original Hook's Farm game, and a photo from Little Wars of the original game in progress. 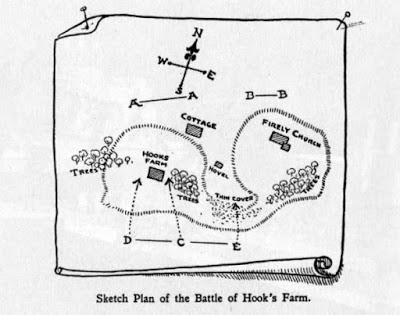 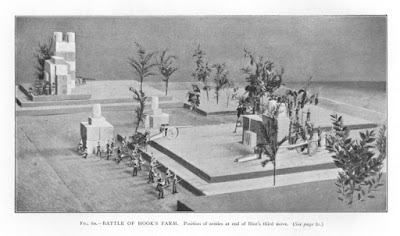 The Game In Pictures
A full game report here is hardly necessary. In truth, figures were moved, dice were rolled and casualties taken off, but this was very much a leisurely afternoon spent discussing wargaming in general and Britains figures in particular. The rules were of Stuart's devising, and as you would expect they were simplicity itself, being similar in character (but not in detail) to those used in previous games. See my previous posts regarding games with Stuart for examples.

The first photo below shows the set-up - Scottish units under my control to the left, English ones commanded by Stuart on the right.


The result of the game? Well, we stopped playing when it was time for me to depart. Beyond that, I don't think either of us paid much attention to who was actually winning.

Thanks as usual to Stuart for such a fine bit of escapism with some truly lovely figures. I think my next post should be an update of how my Ancient armies are progressing. Time to get the camera out!