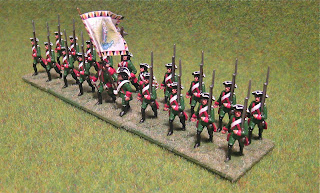 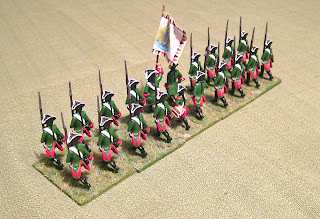 The figures are of course RSM 95 Austrian musketeers, with the pom-poms removed as these were not present on the originals. The standard bearer is an exception: he is one of the Spanish infantry figures RSM now stock - I just happened to have him lying around from a small order of sample figures. Whether the unit actually had a flag I could not find out, but I thought they deserved one. The flag itself was printed free from an online source.
Although called grenadiers, as you can see there is not a mitre or busby in sight. General Loudon apparently thought calling the unit 'grenadiers' might improve recruitment. The unit was to be formed mainly from foreign recruits, including enemy deserters, and was intended to support Austrian light infantry by providing them with formed infantry back up. They seem to have been reasonably successful, so I will class them as standard line infantry.
Despite the shine, these figures are finished with a coat of Windsor and Newton matt acrylic varnish. If I had bought the product to get a nice matt finish I would have taken it back to the shop: what you actually get a is a nice subdued slightly-gloss effect. Luckily, I find this just right.
I like this unit. It makes a change from the usual Austrian white and is likely to enhance the look of my games. My next move is going to be to order some more hussars, but this time from Minden Miniatures. Meanwhile, I have some Prussian grenadiers lying around unpainted, and I have decided to create IR6, the Garde-Grenadier battalion. This will be fun as the unit was an elite one, all grenadiers, and was derived from the battalion of giants recruited by Frederick's father, sometimes known as the Potsdam Grenadiers. Not being a converged unit, one gets the advantage of a grenadier battalion which has a flag. And according to the Kronoskaf SYW Project, the flagpoles were yellow. Nice.
Posted by Keith Flint at 22:10 5 comments:

Black Powder and the Prussians

My Black Powder stats have been amended recently, mainly as a result of reading the book shown below: Frederick the Great on the Art of War, edited by Jay Luvaas. 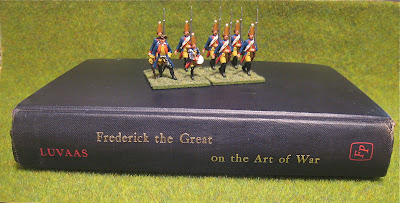 I can't really understand why this work doesn't get more publicity. Professor Luvaas wrote and edited this book in 1966 whilst teaching military history at Allegheny College. He was a mere Doctor at the time, but went on to hold Professorships at the US Military Academy, US Army Military Institute and the US Army War College. He retired in 1995 and died in 2009. Here he has taken on all Frederick's writings on military subjects and edited them into a themed and well ordered book, adding some judicious analysis and comment of his own. This is my kind of book: scholarly but easy to get to grips with. The book has recently been republished in paperback and is easily available in this form on Amazon for under a tenner. However, the original hardback is much more satisfying to own and I managed to pick one up for much the same price from the same website.

I would categorise this book as a must-have for anyone desiring to understand 18th century warfare, along with the works of Duffy, and Nosworthy's Anatomy of Victory. And by the way, it is not to be confused with the work available through Caliver Books, Frederick the Great's Instructions to his Generals, edited by a chap called Hayes. This latter work only has 80 pages (Luvaas' has 391) and only covers the work stated in the title. The Instructions were written before the SYW and do not cover Frederick's later thoughts on warfare developed through his experience of that dreadful conflict. Thanks to Professor Luvaas we can hear the authentic voice of the greatest practitioner of 18th century warfare, 250 years after he committed his thoughts to paper.

Anyway, one of the points made loud and clear is that the tactical superiority of the Prussian army was founded on its ability to manoeuvre better and shoot better than its opponents.  Hardly a stunning conclusion, you will think; but it was having this point drummed home to me through this book that I decided to make a few amendments to my stats tables. The superiority in manoeuvre is covered in the rules mainly by giving the Prussians a higher staff rating. I feel this is essential and has to be done, or you might as well be playing fantasy or imagi-nations (both highly respectable forms of wargaming but not what I am discussing here). In addition, it is tempting to give the Prussians special rules, such as 'superbly drilled', but I have not taken this route. The 'reliable' rule, for example, seems pointless if you have already decided the army justifies higher staff ratings all round. As for firing, the book informs the reader that even conservative estimates allow the Prussians 4 volleys a minute against 2 or 3 for most other nations. Frederick himself was much more bullish, claiming a 3 times superiority in firing for his infantry. Of course, the figures for rate of fire are subject to some dispute but I have accepted that the Prussian advantage was real and significant.

Therefore, all Prussian regular formed infantry get 4 firing dice instead of 3. 'First Fire' is given to all decent quality infantry units of both the Prussian and Austrian armies as representing a basic tactic of the time (the Bavarians and Frei-Korps miss out on this). 'Superbly Drilled' is reserved for grenadiers to give them an edge in reliability, making them additionally suitable for their historic role of undertaking the most difficult attacks. I have made no changes to the cavalry, remaining convinced that the Prussians have the edge, and continuing to refuse the use of the 'heavy cavalry' rule. Note that I have decided to have the option of fielding 3 types of artillery; light, medium or heavy. I decided to differentiate these purely by range and ease of movement. Ranges are given in the tables. Light guns will count as the battalion guns mentioned in the rules for manhandling, whilst heavy guns cannot be manhandled. Medium and heavy guns will move limbered as per the rules, but light guns will get the movement for horse artillery. Finally, Frederick himself, if present, always gets a staff rating of 10. 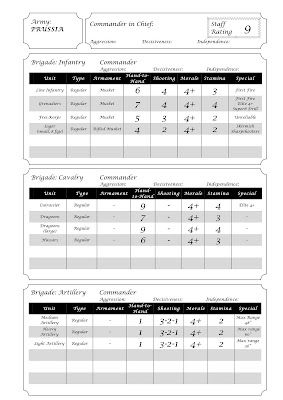 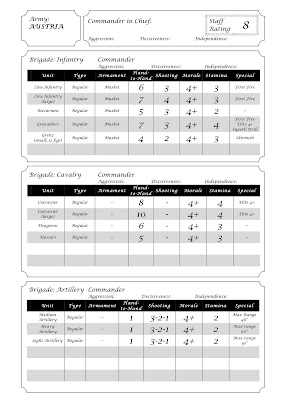 All comments welcomed, of course, especially those disagreeing with my conclusions. Wargaming is a learning process, like any good hobby.

The painting of new SYW units continues to creak along at a slow pace. Recently completed are these two Hussar units, one for the Prussians and one for the Austrians. You will notice I have solved the problem of painting Hussar lace by ignoring it completely. Not a tip I would recommend, but that kind of fiddling around is just too much for my meagre skills and even more meagre will-power.
Note the Austrian unit has a standard whilst the Prussian unit does not, which I believe is historically correct. The RSM95 range doesn't have Hussar officers, so officers are designated by a rearing horse and some very minor conversion work (plus some nice yellow boots).
The release of dismounted Hussar figures from Minden Miniatures is tempting me to add a dismounted option for these units. It's well past time I got a few figures from that manufacturer into my armies. And the choice of dismounted cavalry should be just the ticket for those smaller scenarios featuring La Petite Guerre (or Der Kleine Krieg if you prefer).
Cheers for now!
Posted by Keith Flint at 21:36 1 comment: