Yes folks, I'm afraid I've been letting myself go a bit recently. The last few weeks have seen me dipping my snout into the trough of corporate wargaming. Probably it's because a royalty cheque from Osprey came through recently, which means I can consider my wargaming 'self financing'. My conscience is therefore clear. And I would add that I am perfectly pleased with the purchases I have made - they will not contribute to any lead mountain, nor do they represent butterfly diversions into new projects which will never be completed. Yes, you're right - I do constitute an example of probity and discipline to other wargamers.

Plastic Figures
Advertising works! I've never bothered with any of the modern hard plastic figures, but then I spotted a Warlord Games ad for their new boxes of AWI infantry. Continental Infantry, Hessians, British - all of these are easily adaptable to the SYW if you're not a button-counter. I went for the 'Continental Army Infantry Regiment'. 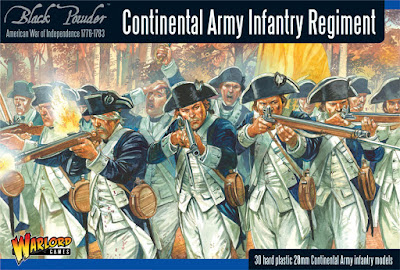 The contents were a bit disconcerting at first - loads of bodies and heads and arms with no proper instruction leaflet. But there is some perfectly reasonable guidance once you look for it, and after a bit I plunged in. Following a bit of grumbling, I surprised myself by actually starting to enjoy the whole process. There are around 5 pieces to each figure on average. Building up the 20 figures I needed for an HoW unit turned out to be a pleasant and absorbing task.

The resulting models are actually a little taller than RSM95s or Minden Miniatures (which are my personal benchmark) - they would fit in well height-wise with such Old School ranges as Willie or Tradition 30mm figures, although generally they are a bit bulkier. But as a stand-alone unit I have no problem with them in this respect. The plastic figures generally match the elegant and properly proportioned look of my 2 favourite ranges. 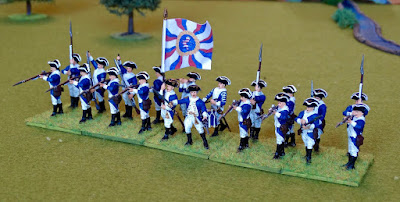 One reservation is that the models seem a little delicate - the muskets are long and slender, as is the flagstaff of the standard bearer. Care will be needed in a wargames situation, I reckon. Another drawback for me is that the figures are in different poses - this will be an advantage for many, but I like my 'uniform' battalions. There is also a prevalence of firing figures, which means that placing bases of figures behind each other to represent column formation is tricky - those long muskets get in the way. Overall, creating one unit of these figures will do for me. It was a bit of fun, but I doubt I'll bother with more.

As for painting, the detailing of the models makes them easy to paint. And as they were grey plastic, I didn't bother with an undercoat - completely unnecessary for my block painting style. I settled on painting them as the Hesse-Darmstadt regiment Prinz Georg. This was for a number of reasons - the uniform is basically a very simple blue and white, and the flag is both attractive and downloadable (by dragging off and printing the illustration on the Kronoskaf website). Plus the dark blue coats mean that the unit can be used on the Prussian side without looking out of place, whilst in actual fact being allied with the Austrians as part of the Reichsarmee. So two units for the price of one. Furthermore, the record indicates that this was one of the more effective Reichsarmee regiments which can be rated as standard quality for Honours of War.

Now you get enough bits for 30 figures in the box, but I only need 20 for one my battalions. Looking for ways to use the remaining models, I selected the 6 light infantry figures to form a small unit of Austrian jaeger, in this case based on a unit called Lacy's Jager Corps. These again had a very simple uniform of mainly white with yellow facings and cuffs. Whether the corps had rifles or muskets is problematic, as any detail on them seems non-existent, but I decided they would have rifles in my service.


As can be seen, these AWI figures have jackets that are really too short for the SYW, and I had to cut down the muskets they were modelled with to produce rifles. In addition the casquets and plumes are not quite the right shape, but they are close enough for me. The figures themselves are not very attractively posed, having a rather 'head down' appearance, but with a quick paint job they'll make an interesting extra unit for the table.

WW2 Plastics
It's been a couple of decades or more since I had any plastic figures in my WW2 collection. But, needing to expand and adapt my collection slightly when moving from Blitzkrieg Commander to Battlegroup Blitzkrieg, I decided to try the Plastic Soldier Company 15mm 'Early War German Infantry'. These really are great value - 138 figures for £21.50 (plus p+p of course) equals about 16p a figure. There is no construction needed for the basic infantry, and just a couple of pieces to put together for things like anti-tank rifles or LMGs. All the models and weapons you need for a 1:1 infantry company are here. There is no flash and little or no preparation is needed. If you were starting out in WW2 wargaming in this size, they would be perfect, in my opinion. The companion box of early war heavy weapons also looks great - but I have all I need of these latter items already. 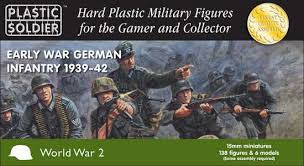 As with the SYW figures, these are just a little bigger and bulkier than the Peter Pig metal figures I already have, but only slightly, so they are quite compatible if not mixed on the same base. The photo below gives the comparison.


Apologies for the basic paint job - these figures, like all my figures, are painted for the tabletop, not for close-up photography.

Resin Buildings in 15mm
Once again my purchases here were initially for Battlegroup Blitzkrieg. The Flames of War Ruined Italian Monastery will be familiar to most WW2 gamers, and I will only say here that having purchased it I am entirely satisfied with the quality and value for money of this building. Being painted (and very well painted at that) it goes from the box straight onto the table, and looks great. As I use 15mm model buildings for my SYW games, it will also be used in that period, as a stand-alone 'built-up-area'. 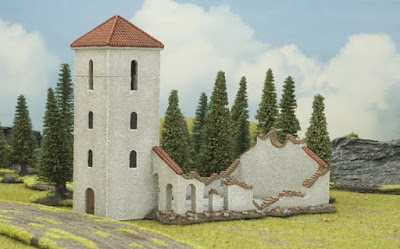 Less well known are the products from Ironclad Miniatures. I already have some of their 15mm Eastern European houses, which are of excellent quality. Knowing this, I jumped in and purchased their 'small ruined factory', which looked as if it would make a great centrepiece for any Battlegroup Blitzkrieg village or town. In this I was quite correct. As usual, there is no flash or bubbles, just a top quality casting that needs little or no preparation. Painting this detailed model will need a bit of thought and time, but it will be worth it.

The only minor problem is that the detachable floor for the 1st storey is a bit small for the space it has to fill - the photo shows the gap around the edges. It is also necessary to enhance the supports for this piece as they are too small to properly hold up the floor - I added 2 lengths of square-section plastic rod, which was the work of minutes. The photos show the building as delivered, with some 15mm figures for scale. 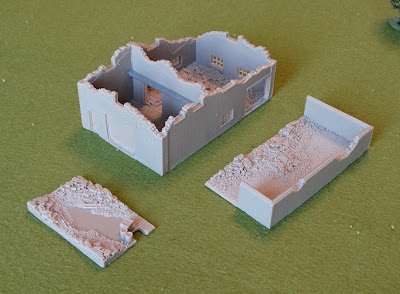 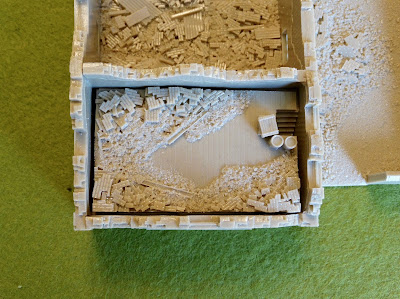 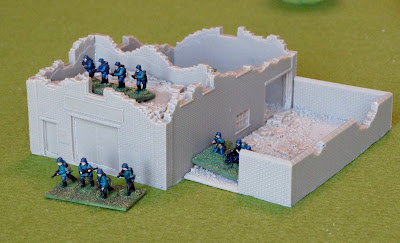 All in all, I'm happy and not feeling too guilty. Both the SYW figures and the monastery have already seen some use.

I heartily endorse all these products!

Thanks for the review of the Continental/Hessians. With such buying restraint you should put a halo round your photo :-). I'm afraid I have such a lead mountain that I quickly had to put aside the idea of getting some of these for my SYW armies, though.
Chris
http://notjustoldschool.blogspot.co.uk/

Nice looking miniatures. I can understand why people are put off plastic figures but I love them.

Although I don't do very much in the 25-30mm size, I do have a handful of antique 30mm British & French for Quebec. If these plastics are near Willie size and slim I shall have to keep them in mind for reinfircements.

It annoys me that the world is such that you should feel the need/pressure to apologise for the very attractive and practical painting of these figures. They remind me of Elastolin figures but then I have a fondness for vintage toys. Live and let live.

Keith,
Just to make you aware, the Minden Hessians are now out, and are very very good, so save some of your hard earned for them. Great rules by the way.

Thanks Robbie. Yes, one of these days I will get a unit or two of Minden Miniatures on the table. The problem is, painting them. Producing whole units these days is a real chore for me. And getting units painted professionally is ridiculously expensive. I guess we'll see.

A nice idea to use these Perry Miniatures as add ons to your existing collection. Dave and I are planning an ImagiNations campaign for September and my forces will be almost exclusively from the Pendraken AWI range.