The Battle of Langensalza

Perhaps I should start by admitting that this is not the Battle of Langensalza. It is, in fact, the Battle of Seminole Ridge, as described in Charles Grant's Wargame Tactics. Of the battle reports in that book, it was Seminole Ridge which attracted me, but that battle was set in the American Civil War, and if replayed in the SYW it obviously needed a new title. 'Langensalza' was the battle in the book that actually was set in the SYW, so I swapped the names round. I hope that's all clear.

The battle is a traditional attack-defence setup, with (in my case) the Austrians defending a ridge line which covers 2 bridges. The bridges are the objective of the attacking Prussians. I went for a 6' x 6' table. The river can only be crossed at the bridges or ford. 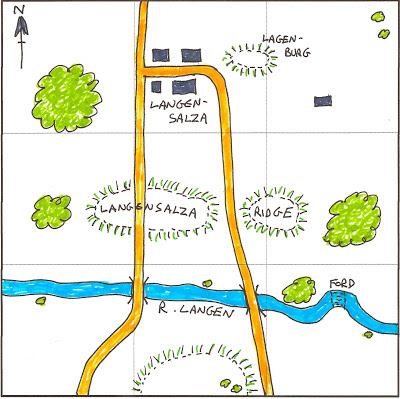 The defenders hold the Langensalza Ridge and the ground to the south of it. The attackers deploy on their baseline along the north table edge with the objective of seizing the ridge and the bridges beyond. Mr Grant gave the attackers twice the number of units as the defenders, so I of course followed suit. Forces were:

To give some interest to the deployment process, I decided on the old school process of a curtain across the table, removed once deployment was complete. The details of how I contrive this are in an earlier post. We allocated sides by dice roll - I got the Austrians, my opponent Steve the Prussians. I'll take the liberty of describing the game from my perspective.

The Game.
Despite its rather Heath Robinson nature, the curtain went up easily enough, accompanied by comments about 'hanging out the washing on the Seigfried Line' from my opponent. There were further comments as we both set out our forces. I admit I do have a habit of muttering to myself when concentrating, but Steve's offer to call Social Services was typical of the sometimes hurtful badinage by which he seeks to gain a psychological advantage during our games. The swine. On removing the curtain, the two sides had deployed as per the photo below.

I had been resoundingly thrashed, losing 7 of my 11 units, as well as one of the bridges and the whole of the ridge. Steve had lost only 2 of his 21 units. My tactics were certainly not the best. It was obvious from the start that my cavalry would be overwhelmed, and I should have redeployed some units to cover my left flank in anticipation of this. Both sides had their share of bad luck, so I certainly couldn't blame the dice rolls either.

There is the question of how evenly balanced the scenario was, but Mr Grant rarely gets these things wrong. The battle when played out in his book was a near run thing. I think I would add another infantry unit to the Austrian force in future, though.

The rules used were my own. Gaming time was about 2.5 hours. And yes, I did enjoy myself, despite a crushing defeat. That's wargaming, after all. 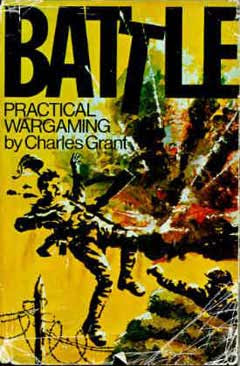 Now I've owned Charles Grant's Battle! Practical Wargaming since the reprint came out in 1972. Of the classic wargaming books on my shelf, it is unique in being the only one bought at the time, not borrowed repeatedly from the library at the time and then finally bought decades later. This book was central to my wargaming for many years - I used the original rules, then adapted them extensively.

I thought I knew this book inside out, but there was evidently one thing I didn't know. The book was, of course, constructed from a series of articles in Meccano Magazine. But (possibly for reasons to do with the size of the book, or time constraints), there were six articles in the magazine that didn't become chapters in the book, dealing with terrain and the use of maps.

I guess a number of you will already know this. This post is one of those where I try and publicise something that others have found out, so that it might be known more widely. So, if this interests you, go to http://wargaming.info/2011/charles-grant-battle-practical-wargaming/. God bless John from New Zealand for telling us all about this on his blog. Downloading the missing chapters is entirely free and legal.

And there's more. An 'expanded' version of the original book is also now on sale from Caliver Books. I thumbed through a copy at Colours, but didn't take too much in. A bit of supplementary content and a few colour pics if I remember rightly. The 'missing chapters' are included. I decided it was not worth the £27.50 asking price for me, but you may well disagree if you check it out.
Posted by Keith Flint at 21:10 3 comments:

Something For The Weekend Sir?
It's been said before by many wargamers, but allow me to repeat here that a nice part of the hobby is when one of those little packages drops onto the front doormat. And this time, it came all the way from Sweden!


I like to dabble in bits and pieces from other figure ranges apart from my normal RSM95s, and this time it was the turn of Holger Eriksson figures, ordered via the Spencer Smith website. Just a few artillerymen, but they were needed to fill a gap. SSM have to order them via Sweden, so postage is a little higher than normal, but full marks to the guys for pointing this out before taking the order.

Unfortunately the arrival of the package coincided with the departure of our family to a rare weekend in the country. No sooner did I have the little box in my hands than my wife was indicating that there was no time for fiddling around with toy soldiers - the car needed packing up and we needed to get away to beat the Friday afternoon traffic. So the packet came with me: unopened.

Quite why this should be a source of amusement and ridicule to my wife and children I have no idea. Opening my little parcel and checking out the contents would simply add to the pleasure of the weekend. And in this I was quite correct. (Thank goodness they didn't catch me taking the above photo at the cottage).

The Figures
So, just 8 artillerymen to unwrap. Elegantly proportioned figures with little or no flash and an acceptable amount of detail - much better in this respect than the Spencer Smith miniatures themselves. Being Swedish they lack the pigtails and turnbacks usual in mid-18th century soldiers, but the figures are very compatible with RSMs and ranges like Willie. If used in small numbers I reckon they add variety without anyone really noticing that the uniforms are a bit wrong. In this spirit I painted the first 2 figures as Bavarian artillerists, and here they are flanking an RSM figure. And no, I didn't take my paints with me for the weekend. Cleaning up and painting took place after my return!

Now, according to Knottel, SYW Bavarian artillerymen did have the usual 'Germanic' style uniforms, with turnbacks and lapels etc, as well as crossbelts, so even the RSM figure is wrong. You'd be better off using Prussian figures. But I think the light grey and cornflower blue work very well. I also like the 'clutching a cannonball' pose on the right. And frankly I'm not that bothered about strict accuracy. These guys will also be manning a yellow painted Austrian howitzer, instead of a grey-blue coloured Bavarian piece, as the artillery itself is already painted: my decision to go Bavarian for the crew was last minute. But I enjoyed my little painting exercise and these guys can join the small Bavarian contingent fighting alongside my Austrian army.

A Bridge Too Far - The Board Game


There is not much online support for the game, though you can find some comments and reviews at Board Game Geek. There is also the odd comment on the official FoW forum, but this seems to be The Boardgame That Battlefront Forgot, which is a shame as it makes for an entertaining change from getting the miniatures out. There is plenty of replay value - the more familiar the rules become, the more you begin to appreciate the various tactical options. I know we'll be getting this game out again in the future.

In short, this is a good cross between 'real' wargaming and those boardgames you've been avoiding all these years. Well worth looking into.
Posted by Keith Flint at 10:37 7 comments: