Very pleased to have got into this gaming system. If it wasn't for DBA, I wouldn't be getting any wargaming in at all.

My buddy Paul and I have got into something of a routine. Paul will pop over for a couple of hours, we'll set up a game, play it, then reverse forces for a second game. Then it takes me about 10 minutes to pack up. Simples! Our limited free time has hardly been dented but we have enjoyed an absorbing and enjoyable game with real toy soldiers.

A couple of photos from our latest session below. I am experimenting with a bit of railway scenic background that I bought a while back. Forgive the quality - these are just quick snaps.


I find I'm getting back into felt scenery these days. It sticks so well to TSS tiles and is very flexible and cheap. I don't think it looks too bad either. The felt bases for woods are essential in DBA, as the wooded area needs to be clearly defined. In my SYW and Polish games, I find I am deploying my felt roads almost all the time now. The fancy rubber roads I bought a while back tend to stay in storage.

If you're thinking of moving into felt terrain pieces, these guys have an extensive range and provide good service:

I find the 30% blend the best for wargaming uses. Less fluffy. Happy felting!
Posted by Keith Flint at 20:36 9 comments:

A number of posts on this blog have expressed concerns about over-commercialisation of the hobby and the growth of Corporate Wargaming. The only time I had an article published in a glossy magazine, I concluded by encouraging readers to chant, 'I am a wargamer, not a consumer' (see this post from 2010). But, well... let's say I've been a bit down lately. I've been living away from home during the working week, and actual wargaming (that is, fighting battles with my toys) has dried up. So I'm afraid I've sought solace in retail therapy. This is not really what I want to be doing, but let me admit everything. Mea culpa, mea maxi culpa...

Books
Ah yes, I'm always a sucker for books. To start with, I told myself time and again I didn't need Henry Hyde's Wargaming Compendium. It would be full of stuff I already knew and that I would have read before in any number of general wargaming books. But then a moment of weakness came over me and I saw I could get it cheap on Amazon. So there went twenty quid or so.

I'm fairly glad I bought it. It is indeed a labour of love by Henry, and a great deal of effort has clearly gone into this weighty tome, but for my money some of those gushing Amazon reviews are a bit over the top. For a book aimed particularly at beginners in the hobby, I reckon it will be read mainly by experienced gamers, which is interesting as (to repeat) a lot of this is well known stuff. So we have a newly published book which many will immediately see as a nostalgia read.

Let me give you some examples of my fairly minor reservations. In explaining some of the basic mechanisms, I feel Henry is beaten in clarity by George Gush's 1980 book A Guide To Wargaming, which remains my favourite general guide despite being thirty years out of date. I also reckon the section on blogging could have been a bit longer, to give the book some more modern relevance. And whilst Henry's rule set was interesting to read, it was a bit too complex for my taste.

Nevertheless, there is a lot in this book (including much advice on modelling and painting) and I know I will be coming back to it in the future, which is the test of a worthwhile purchase. Or at least that's what I keep telling myself.

Also obtained are Charles Grant's Fontenoy (1975) and the Osprey Zorndorf 1758 (2003). Both good, solid wargames reads. I won't go into detail - if the 18th century is your thing, they are both recommended.

Magazines
And the list continues. Miniature Wargames 365 was purchased, then Wargames, Soldiers and Strategy 68. Both were OK, and kept me occupied for a few hours, but 'OK' is as far as I would go. No great inspiration here. Ho hum.

Figures
Oh, I hate those wargamers who write about how they just 'couldn't resist' some set of figures they've seen. But on seeing the new armed civilians range from Minden Miniatures, I just couldn't resist them. In my defence, I only bought ten, and the 'civilian militia' unit is already ready for action, thanks to Neil Parsons at Mount and Blade.

After my last post, I had decided to leave the subject of painting alone (particularly as I know very little about it). However, I think it's worth noting that many figure painters would consider the figures unfinished. This is not down to Neil, who simply followed my instructions. I did add a spot of dark flesh to emphasise eyes and mouths, as well as flocking the bases, but the point I want to make is that the top photo in particular shows the figures in close up. They are nice figures nicely photographed, but a good part of the impression that they might be 'unfinished' is generated by the illusion that they are at least 40mm in size, or maybe bigger. But they are only 30mm figures. From 'wargames ranges' my own opinion is that these little marvels are indeed as finished as they need to be.

Continuing to trawl the adverts in my wargames magazines in search of a fix, I happened upon the one placed for Eagle Figures. These are nice looking miniatures with a 1980s pedigree, and a good SYW range is available. Just what I needed to flesh out some of my final units with command groups.

When I first received them, I thought they were lovely figures but too bulky to match with my elegant RSM95s. On reflection, and looking at the photos I took for the blog, I'm not so sure. I think they will blend nicely, and I will give them a go. Thanks to Ian at Eagle for excellent service.

Oh, the shame! These were my most straightforwardly unnecessary purchase. A box of 4 Battlefront DFS230 gliders were bought on a whim, at the end of a lonely evening in my digs at Oxford. The excuse is that I am probably going to keep most of the fallschirmjager that I bought a while back, and these gliders will give me an additional reason to trot them out in fictional Poland 1939 scenarios.

The good news is that the models are great, being easy to put together and very nicely moulded, as well as being reasonably priced.

I chopped 10mm off each wingtip to reduce the table footprint of these babies, and left off the optional machine gunners as these wouldn't be correct for the 'A' model that would have been used in 1939. The wing cropping doesn't alter the fact that these gliders are over-sized when compared with the Zvezda 1/200th Ju-52s that I also have (see below). However, since airlanding troops would be unlikely to operate with glider troops, a mismatch can probably be avoided. 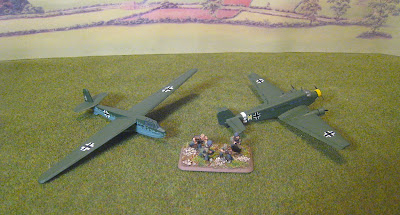 My name's Keith, and I'm a consumer-holic

Oh for heaven's sake, why worry? The lead hillock is hardly increased, and I have some nice books and models in my possession. But a quick tally shows all the above cost me around £120 in total, including painting services and postage. That's a not inconsiderable sum over a few weeks.

Let this be a warning to you all.