I did think of calling this post New House, Old Magazines 2. I have been reading through the old wargames magazines which I unearthed when moving house. The main result was the realisation that I was keeping most of them for old time's sake only - there was nothing in the majority of them that really interested me, and I would never read them again. So most of them went in the bin. But I did keep a select few with thought-provoking or useful articles inside. 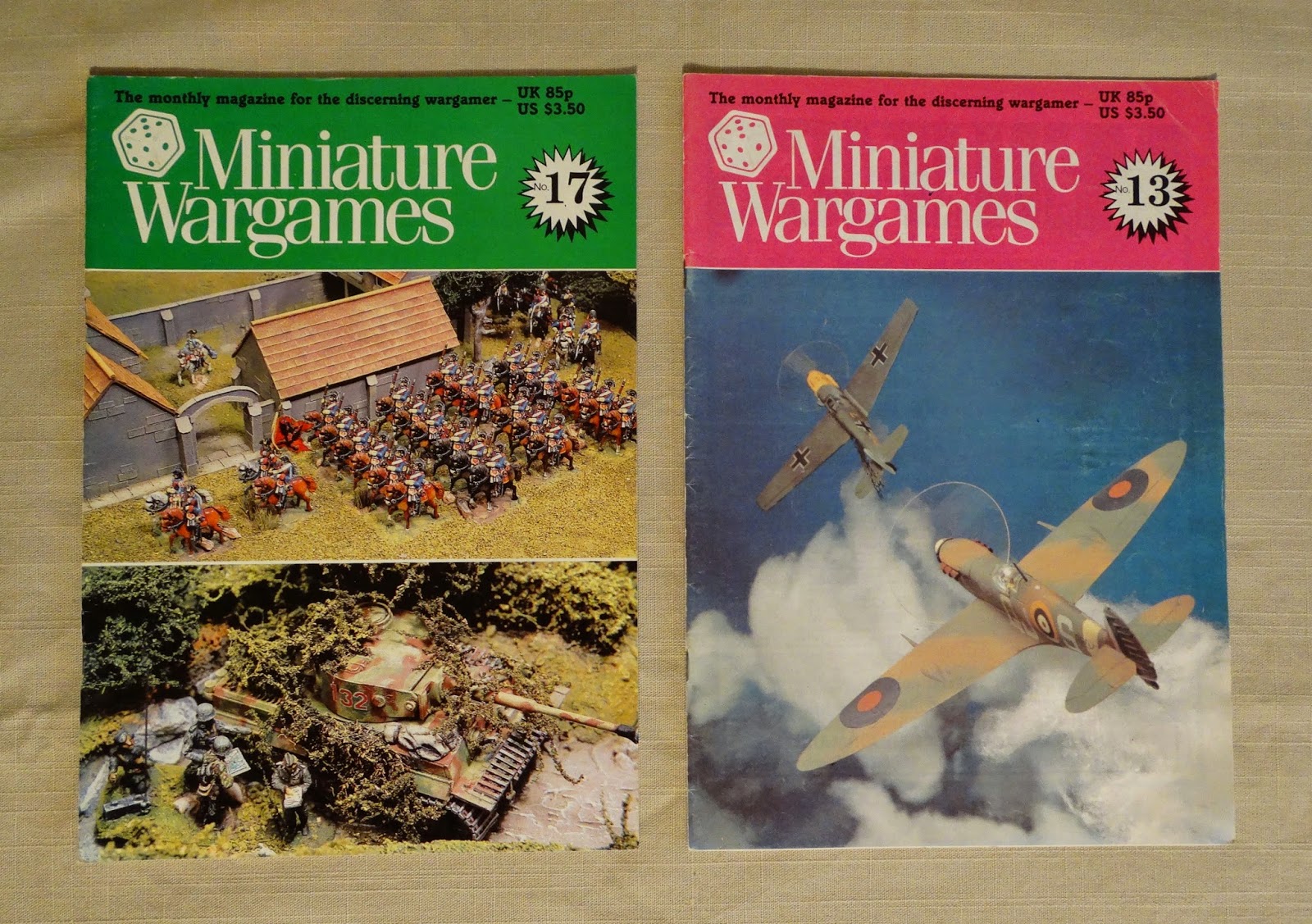 Particularly thought-provoking were a series of articles on the use of toy soldiers in wargaming. Now, I think of my hobby very much as playing with toy soldiers, though I suppose 'miniature wargaming' or 'wargaming with miniatures' is more like the official title. So an article entitled 'The Case Against Toy Soldiers' (MW 13) was bound to jump out at me. Some of you (those of a certain age, shall we say?) may even remember the article. Basically, it was Paddy Griffith being deliberately controversial by making the point that those looking for any sort of realism in their games would be better off trying some other sort of wargaming than that variety which uses model soldiers. Paddy rather patronisingly lets wargamers such as me off the hook early in the article with this statement,


Please note that the points I want to make apply only to games which are aiming at some sort of historical realism. You can ignore them if your aim is just to have a bit of knockabout fun with your toys, or if you are into fantasy.


Yeah, cheers Paddy. Though having 'a bit of knockabout fun' does describe my attitude to wargaming reasonably well. What really struck me was how firmly Paddy completely missed the point about the hobby.  Model or toy soldiers are not peripheral to some practical attempt to recreate the warfare of the past. They are the central factor in a lighthearted pastime that at most aims to create 'historically plausible results' (to quote Henry Hyde). Paddy reckoned that around 50% of wargamers were 'informed members of the wargame hobby' (thanks again) who were seriously into realism in their games. I don't really think that was true when the article was written in 1984, and I'm sure it's not true now. Thankfully, whatever tosh people used to believe about recreating or researching warfare through recreational games has faded into the past. Indeed, how Paddy got to thinking that that was what the hobby was about after reading Donald Featherstone or Charles Grant is beyond me.


What his article pointed up is, I think, an aberration (or, more accurately, a dead end) that surfaced as wargaming began to develop during the late 70s and 80s: the aberration that we really were trying to research past warfare through gaming, and/or that realism was the holy grail of the hobby, and in particular the holy grail of its rules. This seems to be confirmed by the 3 articles in reply to Paddy that appeared in  MW 17, one of them by Phil Barker. None of them makes the obvious point that Paddy was just barking up the wrong tree. They all try to justify how toy soldiers really can help you out in your simulation of warfare, or how said soldiers really aren't such a problem as Paddy makes out. I won't bore you with the details of the arguments. They were all rather unappealing I'm afraid.


A little later, there appeared a three part article in three consecutive issues of MW (21, 22, and 23 in 1985) entitled 'The Wargame: Game or Simulation?'. This was by another member of Wargame Developments called George Jeffrey. I remembered these articles as soon as I found them - I had read them with considerable care in 1985, thought about what George was trying to say, and finally concluded he was talking bollocks. Again, summarising the arguments would be tiresome, but after assuming that a move towards 'simulation' was the goal of all serious gamers there was some largely inexplicable stuff about games moving from 'decision point' to 'decision point', and what happened between being calculated by applying known casualty and movement rates. Known casualty rates? Fat chance, I thought, even in 1985. How all this could be made into a workable set of rules was unclear, and certainly not laid down in any examples. Most tellingly, nothing along the lines George was suggesting has ever appeared in any published set of rules, at least as far as I know.


Thankfully, this kind of thing then seemed to die out. We all know the results - rules started to get simpler, easier and faster to play, and wargamers began to return to what the hobby had started out as - a bunch of grown men (and the occasional woman) playing with toy soldiers. Unfortunately, those articles coloured my idea of what Wargames Developments was about. Apparently they were a bunch of wargamers who looked down their noses at people like me, and wrote patronising articles pointing out what the rest of us were doing wrong. But they certainly weren't the only ones thinking along those lines.

I don't know a great deal about what WD get up to, even now, but good luck to them in their quest for new ways to play games, with or without toy soldiers. They deserve more publicity. However, I know which branch of the hobby I'll be sticking with.
Posted by Keith Flint at 19:45 6 comments:

Club wargaming has never been a big part of my hobby. In the past I have been happy to do most of my gaming at home or at other people's homes, within a small circle of wargaming friends. But I appreciate club gaming can add a lot to what one gets out of the hobby - it's just a question of finding a club that suits you and is within a reasonable distance.

In the Bristol area, I was lucky to be steered towards the Portbury Knights club, which at the time I joined was a thriving club with both boardgaming/fantasy and historical players hard at it during most meetings. Such a meeting was the subject of my original Down At The Club post from 2010. Unfortunately the club seems to have fallen on hard times, having zero web presence now as far as I can tell. Rumour has it that historical gaming has more or less stopped.

On moving to the Oxford area, joining a club was an obvious way to meet new wargamers, so I ended up at the Oxford Wargames Society one Monday evening not long ago. I was lucky in that club members focus mainly on historical wargaming, and I found I was quickly welcomed and invited to join in. A particularly refreshing aspect of the club was that a number of members focus on developing their own rules and trying these out at club meetings.

Anyway, for my third evening at the society I was asked to put on a Blitzkrieg Commander game for some interested players. This I managed to do, using an adaption of my Race To The Vistula scenario from a good few years ago. I am not much used to acting as an umpire, so my guidance tended to be a little lacking in timeliness and accuracy as the evening progressed. Parts of the rules ended up being forgotten or badly explained, but a hectic game ensued with everyone seeming to enjoy themselves. A few photos are shown below:


So What's The Point?
Club gaming? Of course, you have to be able to find a club that suits you, that covers your interests and has like-minded people attending. But in my limited experience, club gaming can offer a great deal. On a practical level, it gives you a physical space much greater than any normal home environment, so those big games are a possibility. It also offers an environment away from the pressures of home - you can concentrate on the gaming without interruption. And if you find the right club, those big club projects can become a reality, whether you join in with what's already going on or maybe start your own.

But, as was pointed out to me by one of the members of the OWS, the most significant difference from home wargaming is the social aspect. You encounter new wargamers and are exposed to new ideas and new perspectives. And club games tend to have a different character, especially if more than two of you are involved. Of course, one could just do what one does at home but do it at the club. However, this might be missing the point. The game of BKC I played at the OWS was very different from the game as I would play it at home. The poring over the rulebook, the quiet, concentrated effort to make sure the game correctly included every rule aspect, was replaced by a much more rough and ready approach where what mattered was keeping the game moving as rapidly as possible. Both approaches provide enjoyable wargaming: experiencing both is well worthwhile.

Plus, of course, if you pick the right club you can go down the pub afterwards. No photos of the latter event are available.

Many thanks to the chaps at OWS for making me welcome. Soon it will be time to get them playtesting Honours of War. I just hope they'll be gentle with me...