Miniature Wargaming - The Movie. A Review

Well, it seems this documentary film is now available in the UK, via the Sky Store at a price of £9.99. Check the link here. If you're not a Sky customer you have to download the Sky Store Player app, which is a bit of a hassle but no big deal. So I went ahead, bought the film, and watched it. And here's my review. 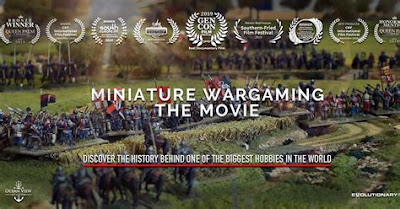 I would say that most of the criticisms I have read online, particularly in the review from Little Wars TV, are justified. I would also check out the reviews on IMDb.
First off, the opening scene of an air-soft engagement in progress is confusing and doesn't really work - whilst including the additional problem of having nothing to do with miniature wargaming. There follows a basic introduction to the hobby, which is OK, and then we start to meet the main protagonists around whom the film is anchored. Which is where the film really starts to fall down.
The blurb from the website gives things away - "the movie dives into the heart of the wargaming industry and reveals the impact it has on people's lives". 'The industry' is a term constantly used throughout the film, and much of the film is about this 'wargaming industry', not wargaming as a hobby. Two of the three personal stories told revolve around people running small wargaming businesses. As a result, an awful lot of the film feels like it is about the problems of running a small business, rather than being about the hobby itself. The brief section set in the U.S. also focusses on a (successful) wargaming business.
Criticisms that the film is rather depressing also ring true. One of the main characters, Andy Bryant, is a war veteran suffering from PTSD who received a raw deal from the British Army and is now struggling with his personal life as well as his home-based terrain business. Another character, Chris Nicholls, is struggling to support his family with his wargaming business and is going under from stress. Even the two actual wargamers, who are followed to a wargaming competition in Norway, find the competition itself a bit disappointing, and furthermore one of them has (you guessed it) struggled with depression in the past and found his wargaming buddies helped him through it. Crikey.
Turning back to Chris Nicholls, the main part of his story is his struggle to get his boardgame ready for presentation at a major gaming show. He fails, as you might expect, but note he is developing a boardgame, not a miniature wargame. This again points to my main issue with the film - it signally fails to do what it says on the tin. Miniature wargaming as a hobby is absent from probably half the running time. The phrase 'playing with toy soldiers' (my own summary of what the hobby is) never even occurs in the film. Henry Hyde's brief canter through the history of wargaming is OK as far as it goes, but is so condensed and rapid that non-wargamers won't gain much from it. Not Henry's fault, but indicative of the film's priorities.
I also found the film frankly a bit dull in parts, and could easily have switched off, but I stuck with it and did find some interest in the personal stories being told. There is also interesting background here if you do indeed want to understand the miniature wargaming 'industry', with companies like Warlord Games receiving a good bit of time. We get to learn a bit about the advantages of Kickstarter campaigns. But the pleasures of playing with toy soldiers are often far in the background.
I felt the film-maker needed to reach out to more grass-roots players and examine their thoughts and experiences concerning the hobby, and give a greater idea of what the hobby actually is and what it means to people. Where were the visits to clubs and wargaming shows? Where were the fabulous games put on by dedicated gamers, such as I saw at Partizan this year? I guess this relates to my own feeling that our hobby is fundamentally a grass-roots one, and that the 'industry' usually feels peripheral to me, although the fact that the hobby does support an industry is an important point to make.
As a final point, the structure of the film can be rather confusing, as it jumps from theme to theme and situation to situation, particularly in the first hour.
So overall, not really a film I would recommend. I was disappointed with a movie which I was keen to enjoy. It would appear from the evidence in the film that most wargamers are dysfunctional, or failures in life, or both. Certainly, most wargamers would admit to being a bit geeky, at least as regards their hobby. But they also tend to be intelligent and sociable people who have fun with a hobby they enjoy and which they don't take too seriously, no matter how much historical research they do or how many hours they spend painting toy soldiers.
If you don't mind having a punt with a tenner, you may find some interest here, even if only in the fact that this is (and is likely to remain), the only film about the hobby. And it is very professionally made. But anyone wanting to know what miniature wargaming is really about would be best directed to Little Wars TV and their YouTube channel - where people actually seem to have fun with their toy soldiers.
Posted by Keith Flint at 14:18 13 comments: