On choosing the forces for a play-through of my Save The Brigade scenario, I decided that the Warsaw Armoured Brigade would be just the job for the defenders. I've represented its brother unit, the 10th Armoured Brigade ('The Black Brigade') in previous games, so I had the models needed. Whilst this would be an imaginary battle, I also still wanted opposing forces that were at least potential historical opponents. In the end I came up with this...

The Warsaw Armoured Motorised Brigade was one of only 2 such units in the Polish Army in 1939, the other being the better known 10th Armoured Motorised Brigade. The Warsaw Armoured Brigade was not fully combat ready when the Germans invaded, but on 5th September it joined Army Lublin and took part in the defence of the Vistula river line south of Warsaw, in the vicinity of the city of Lublin. Later it was ordered further south towards Lvov.

This completely fictional scenario pits the brigade against elements of 2nd Panzer Division which were also active in the area south of Lublin towards Lvov at the beginning of the 3rd week of September.

Scenario (see previous post for map and detailed conditions)
The Warsaw Brigade must extricate itself from a potential encirclement by the 2nd Panzer Division by leaving its positions in a wooded area and retreating across a river. An armoured train supports the move, under command of the Brigade CO. Game length 10 turns. 6’ x 6’ table.

The Warsaw Armoured Brigade can ignore the 'penny packets' rule normally applied to Polish forces of 1939, but the 'poor combined arms' rule will still be used - it seems their training may have been incomplete.

The brigade deploys in the central wooded area, the train and Bofors deploy across the river. Units must retreat off table via the base edges enclosed by the river. Save 50% of the units for a major victory, 25% for a minor victory.

It was a shame we didn't have time for more moves. None of the victory conditions had been achieved - the Germans had lost 5 units, the Poles only 2. However, after 5 turns the German recce battalion had already cut off the Poles from the wooden bridge, and the 1st Battalion of Panzer Regt. 3 had reached the river not far from the road bridge. The Poles looked certain to be trapped and they were judged to have lost.

The Poles should probably have concentrated on immediate retreat rather fighting a delaying action. Certainly with reasonable command rolls the Germans can get around the Polish position quite rapidly, and the scenario may need tweaking to give the Poles a better chance of victory. Perhaps the German main force could be restricted to arrival only in the northern two thirds of their table edge. Or, with my selection of forces, it might be that simply removing one of the German panzer battalions altogether would make a more equal game.
Posted by Keith Flint at 14:13 3 comments:

Just a quick post to point readers to a truly excellent and thought provoking article on the 'Two Fat Lardies' blog.

I won't paraphrase the content - go to the link and enjoy. I have to say I have never really looked into any of the TFL rule sets, let alone played them, but recently I have stumbled over articles and comments by these guys that make a lot of sense and make me want to check out their products. If only they did a SYW set! Unfortunately their WW2 set is focussed at company level, which is not my preferred option, but I think with a new edition of I Ain't Been Shot Mum out there, I might just look into whether a purchase might be worthwhile.

Certainly the article itself is refreshing proof that there are still some truly 'thinking' wargamers out there.
Posted by Keith Flint at 21:23 4 comments: 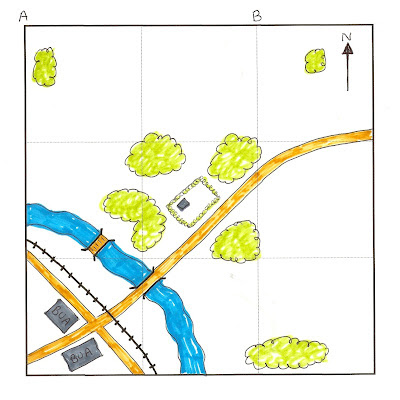 I'm off on my hols soon, so it may be a couple of weeks before I get to play the game and post the results. See you then!
Posted by Keith Flint at 19:07 3 comments: