That Was The Week That Was

So, last week was both unusual and interesting from a wargaming point of view. Not only did I end up with three events planned in 5 days, but they all involved me joining in with other people's games, so I could be lazy and let the other guys do all the work of providing toys, rules and scenarios. Nice!

Monday - Edgehill
Monday saw me making a visit to the Oxford Wargames Society. I am fortunate to have contacts at both the Oxford and Abingdon clubs, both of which are great clubs and have been the source of many new wargaming friends. Unfortunately my shiftwork patterns and the demands of Real Life mean I don't visit either as often as I would like.

It was most kind of Bob Medcraft at the Oxford Society to invite me to join in with a refight of Edgehill, using the Field of Glory Renaissance rules (hereafter FOG(R)). Not only do I not play the ECW, but I had never used or even read any of the FOG series, so there would be a steep learning curve, and I would need a lot of help. When Bob sent me the cheat sheets for FOG(R) as an introduction, I was a bit intimidated at first as there were 8 of them! Were these rules going to be a bit too complex for a beginner?


Needless to say on arrival at the club I was welcomed in to the group of players and given a cheerful crash course in the scenario and the rules. Ben, who had done the research and sorted out the set up, had deliberately kept things simple, so the 18' x 4' table was quickly in place along with the 15mm figures. The others were all long time FOG(R) players, so things cracked along at a good pace. The rulebook hardly came out at all, and even the playsheets didn't get much use - I had the usual experience in such circumstances of being heavily guided, and there was plenty of "roll 3 dice Keith, you need 5 or 6!".


It was all good clean fun, with plenty of banter and much cheering of successful die rolls, and after just over 3 hours gaming it was getting towards time to pack up. The battle was a close run thing, as was the original. The cavalry flanks had engaged first, and the infantry was just becoming seriously engaged as we finished. Both sides still had a chance, but maybe Parliament had a slight edge, with all that low class Royalist infantry around. What was really impressive was that a major battle, with all units represented on the table, had been set up, wargamed and cleared away in around 4 hours. This is a tribute to the enthusiasm and knowledge of the other 4 players, and also to the rules which coped admirably, although of course it helps immensely to be well practised in their use.


Wednesday - Sittangbad
A few weeks ago a comment appeared on my blog from a wargamer who just happened to live in the same little town in the Cotswolds as me. This was a great piece of good luck, but what was really interesting was that he signed himself Stuart Asquith. Naturally, my first thought was, I wonder if...? And indeed it was. It turned out I live about 15 minutes walk away from the former editor of Practical Wargaming, the author of a stack of books on our hobby, and someone who has known and gamed with all my old heroes, including Donald Featherstone, Charles Grant (senior and junior), and Terry Wise. In the picture below he gives a masterclass in the art of pointing in a wargames photo.


On moving to the Cotswolds, Stuart had to downsize his wargaming somewhat, but he retains his love of the hobby, and in particular his enthusiasm for the collection and painting of classic figure ranges in 30mm, such as Willie, Tradition and Holger Eriksson. He is also a stalwart fan of the Charge! rules, which continue to be his favourite set, and cover his favourite period. So what could be better than to be invited over for a dining table recreation of the classic Battle of Sittangbad, where a young whippersnapper such a myself could be instructed in the finer points?

Stuart has adapted the rules for smaller units of between 8 and 16 figures, and he provided me with a playsheet and rules summary to help things along. Naturally these smaller units make things a whole lot easier than handling the 48 figure, individually based infantry regiments which featured in the original book.

And so we set out the figures and got started. This was my first game at Stuart's and it was old school all the way - in fact, a real bit of old school magic. It's been a while since I handled units with individual soldiers, but with the smaller regiments it was no problem at all. This was a very different experience to Monday - a wonderfully relaxing time with rules of a very refreshing simplicity that could be picked up as one went along. The respective forces were very much in the Grant/Young tradition, being a mix of various units from a variety of horse and musket campaigns, but all lovely figures beautifully painted. Stuart's forces (in the original battle, the Electoral forces under Herzog Johann) were commanded by his favourite general, Soubise, whose figure has been with him for a long while and always appears with an ADC and his favourite... erm, niece, as Stuart puts it!

I took the role of General Lentulus, commanding the Imperial forces. As you can see, the terrain was very much in keeping with the rules and figures - some of the old Merit trees which I remember fondly from Charles Grant's Practical Wargaming (1972), some cardboard houses bought in a local shop, and hills from wooden contours. After a cup of tea and a ham roll, I think we called it a draw. My forces had been defeated, but Soubise had been detained for too long to cross the Weser on schedule.  I'll let some pictures give you the flavour - unfortunately my second-rate photos don't really do the figures justice.


All in all a fine bit of wargaming. Stuart has some of his figures on multiple bases and so we might try a bit of Honours of War with these, which should be good.

Friday - The Death's Head At Andreevka
And so on Friday an hour or so's drive took me to the northern outskirts of Bristol for some Battlegroup Kursk, laid on by the very lovely Paul James. Paul was the gamer who first introduced me to the Batttlegroup rules, around 3 years ago. I remember when he showed me the rulebook I thought he was nuts - thirty quid for a set of fancy WW2 rules and they only cover the Battle of Kursk? Crazy! But I came round eventually and as readers of the blog will know, I am very much enjoying using my 1939 Polish and German troops with Battlegroup Blitzkrieg.

Paul would be the first to admit he is not the world's best modeller and painter - he relies on his son for tank kit construction and painting. I well recall one occasion when Paul had been preparing some plastic Russian anti-tank guns for a forthcoming battle - a frustrating life or death struggle with the multi-part crew delayed the project, and so with the deadline looming Paul just glued the guns and figures onto cardboard bases and spray painted the whole lot from close range in one shade of green. The instructive thing was, once they were on table and the game was in full swing, one hardly noticed the basic paint job.

Anyway, without going into too much detail, the game involved the Russians attacking a German-held village, with German reserves coming to the rescue later in the game. The photos below show the German defensive positions. 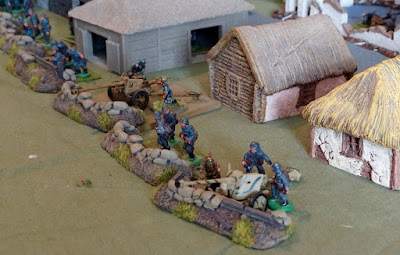 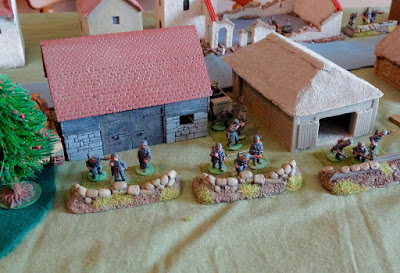 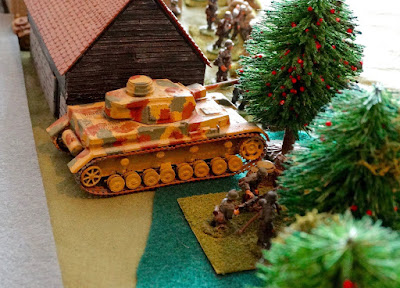 I had some model building nostalgia in this game as well - I gave Paul some of my old 20mm buildings when I changed scales, and it always gives me a kick to see these old friends given a run out.

The Andreevka scenario is a good one and I may well adapt it for a Poland 1939 game. Paul had to substitute T-34s and T-70s for the Churchills used in the real battle. The leading Russian tanks managed to penetrate into the village despite heavy losses, and threatened the objective (the church, represented by a Flames of War ruined monastery), but the German reserves arrived to save the day before the Russian infantry could arrive to support them. We didn't quite get to the end of the game according to the official victory conditions, but we reckoned the Germans had held on and won.


A final point - in classic wargaming fashion, Paul had resolved his need for a fair amount of cornfields at short notice by a visit to B&Q, where he had obtained the doormats you can see for a quid each. And of course, our imaginations supplied the rest. Doormats? What doormats?

On Variety In Wargaming
Being made redundant from my job in Bristol and moving to Oxfordshire was of course initially unwelcome, and an upheaval my wife and I could have done without, at the time. But overall things have worked out. In wargaming terms, I have managed to keep in touch with old buddies in the Bristol area, and have made a number of new friends in Oxfordshire and Gloucestershire who have really enriched the hobby for me.

What these three games demonstrated to me was that despite all the different rules, different periods and different model scales, it's the wargamers themselves that make for such a variety of experiences in the hobby. Even with the same rules and the same period in the same scale, you can have very different games as your wargaming company changes. This is both enjoyable and instructive, as one is exposed to different approaches to the hobby. Intense or relaxed games, beautifully painted or quickly produced models, big or small scenarios - take your choice, or if you're lucky like me, don't choose at all and enjoy the variety. Long may it continue.