Suddenly it's that time again: Colours 2010 is just 3 weeks away. In the last few years this has become my main show of the year: it's not too far away, it's a good size, it's well organised and it has perhaps the best location for a wargames show outside Kelham Hall. The grandstand at Newbury Racecourse provides an open and modern venue, with great views across the course from the floor to ceiling windows.
This year I'm doing another demo game, but on this occasion it's SYW using the Black Powder rules. I'm attempting the Battle of Lobositz (the opening battle of the war), which I've decided is just possible despite my limited resources. More details about the wargames refight will be posted when I write up the game on this blog after the show.
I have to say straight away that my demo games are unlikely to win any prizes. They tend to be basic and use mostly those resources I already have. No months of constructing purpose-built terrain and assembling armies of hundreds of figures. I salute those who produce the jaw-dropping set-ups we all admire - but where do you get the time? And where do you get the sheer enthusiasm to see those projects through? I'm afraid I am sadly lacking in both. 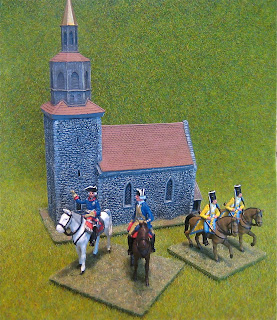 Anyway, even I couldn't do Lobositz without representing Frederick himself. I decided to go for the Tradition figure of the King of Prussia, along with another mounted general from the range to keep him company. Some will know these as Stadden figures, after their original sculptor. They are painted to my usual basic, 'toy soldier' standard. Although advertised as 30mm, you can see they are well over that size and tower over my RSM hussar figures. But placed on their own command base they blend in well enough, and give due prominence to Frederick. After all, he was something of a towering personality! Cue tumbleweed.
The hussars were one of the few extra units I had time to paint especially for the game. They represent Hussar Regiment no.7, the 'Yellow Hussars'. The church was also bought for the game. This is another JR Miniatures building (like the others I use for this period), from their 15mm Prussia range. In contrast to Frederick, this building turned out be a little under scale, with doors more suited to 10mm figures. But once mixed in with the other buildings, it will form a nice addition to the town of Lobositz (or Lobosice, as it is called these days, being in the Czech Republic). Somehow, once the game is set-up and battle commences, one doesn't notice that Frederick would have to literally crawl through the doors on his stomach to get into the church!
I hope that some of those reading this blog will be able to attend the show (11th - 12th September). I will be there on the Sunday only, first floor. Come and say hello.
Posted by Keith Flint at 19:14 1 comment: