A brief note to those who have taken an interest in this set of rules as a result of my initial post - an updated version is now available.

I hope they may be of interest. And still entirely free!

Oh dear. I concluded my last post with "back soon with more interesting shit", and that was well over two months ago. Nevertheless, if you can ignore the 'soon', I hope I can at least interest you with some comments on a rule book I have bought recently, and which has impressed me greatly. As you can tell from the title, the rules in question are Kings of War Historical, authored by Alessio Cavatore (of Warhammer and Bolt Action fame) and published by Mantic Games. 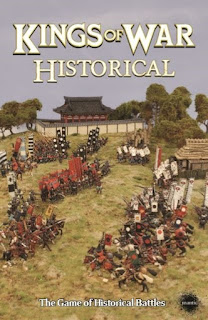 I thought I had explored just about all the relevant rule sets relating to ancient wargaming over the last couple of years, but it turns out I had missed these. In the end, they were recommended to me recently when I did a podcast with Henry Hyde. We had been discussing the search for simple rules, and he flagged this book up as particularly good - simple but not simplistic. It turned out he was quite correct - Henry, thanks for the 'heads up' on this one.

The Upsides
So, you pay £20 for the book, which is a well produced softback in full colour between A4 and A5 in size. There are 125 pages, of which the rules take up about 35 pages. The remainder is mainly 'Force Lists', with the addition of some scenarios and the usual introduction along with a couple of pages of modelling notes.

I would guess around 40% of the book is made up of colour photos and some diagrams explaining play. The rules themselves are therefore of a very manageable length and read logically and clearly. They are indeed pretty simple, especially as ancients rules go, and to me felt easier to assimilate than DBA. They are a world simpler than DBM, Warmaster Ancients, or Hail Caesar, for example.

How do they achieve this? Firstly, they are very strictly IGO-UGO. There is no interactive play at all during a player turn - the active player moves (including charging), then shoots, then melees. His opponent does nothing. There are no evades, no shooting at chargers, no counter-charges, and no simultaneous melees. This seems odd at first and put me off, until I tried a small solo run through, where things began to make sense. Not being able to evade felt particularly strange - keeping your light troops out of charge range becomes a basic tactic, to avoid them being wiped out in melees against heavier opponents. I admit I restricted the length of charge moves (which constitute up to a double move under the rules) to help this process, otherwise javelin men in particular have issues harrying heavy infantry. However, shooting ranges are generous and this helps. A simple evade rule is easily inserted if you feel the need. I soon found I didn't really miss not shooting at chargers - you will have probably shot at your opponents in your own previous turn anyway.

Melees are particularly interesting. This is where a lot of games with other rule sets grind to a halt as the battle lines clash. The basically simple mechanisms in KoW help with this, but fundamentally the IGO-UGO format is the key. You charge your opponent who cannot counter-charge or evade, and you inflict casualties on him. If he isn't actually destroyed, you then 'bounce off' by pulling back an inch. Then in his turn he can charge you (which is called counter-charging in the rules) and inflict casualties on you. This creates a set of fighting pulses which for me gave an interesting period feel. Melees between ill-matched units are over quickly, but between equal or near equal opponents they can grind on for a few turns with fortunes swinging back and forth. Definitely good fun.

Secondly, the rules employ standard unit sizes, and only one formation for each size. So for infantry you have 'troops' of 10 figures in 2 ranks, 'regiments' of 20 figures in 4 ranks, 'hordes' of 40 figures in 4 ranks, and finally 'legions' of a hefty 60 figures in 6 ranks. Figures are not removed during fighting, but hits are recorded using whatever system you prefer (counters, dice, written record, etc.). This standardisation really does aid simplification, but I felt the need to allow units above troop size to go 'shallow' if they wanted, by halving their depth. This derives from the willingness of many ancient armies to thin out their lines if needed to cover the right frontage, especially when outnumbered. I decided not to allow this change of formation to affect fighting qualities in any way, in accordance with the simple nature of the original rules. You might think a unit of 40 skirmishers in a 4 rank block is a bit odd, but such troop types are usually restricted to troop or regiment size. Breaking them up into individual troops of 10 figures easily represents their flexible nature.

The other main simplifying process is having stat tables very akin to Hail Caesar, Warmaster or Warhammer, enhanced by Special Rules. I have had my reservations about this type of approach in the past, in particular with the tendency to build up too many special rules which can be forgotten or which tend to slow up play as you try and work out what they mean. But if you have the sense to keep special rules to a minimum, they can work quite well. Their particular role in simplification is neatly summed up by Dan Mersey in his intro to Lion Rampant - "gain period feel by differing profiles for troops; avoid complex core rules". So having stat tables allows you to keep the core rules straightforward, avoiding all those ifs, buts and maybes as well as the various tables for shooting and melee along with their lists of modifiers.

On top of this there are no funny dice, no grids, no cards - and no command and control. The latter was a step too far for me and I have added a very simple, command radius-style rule which means anyone out of radius needs to roll to make an attacking move. Interestingly, your generals count as units and so can join in the fight as they wish. This works pretty well and is good fun.

I have played 3 solo games so far, including a re-fight of my much-loved Donald Featherstone 'Trimsos' scenario. I have been very impressed with how easily the games play and how quickly the rules are learned. The use of the stat tables means you can tailor each type of unit to exactly the effectiveness and behaviour you want - special rules can be added sparingly to give some units (for example, warbands or Macedonian pike phalanxes) that extra bit of character.

I need hardly add that the actual processes for firing, melee and morale are quick and straightforward - but they work very well. The unit stats handle the subtleties - lists of modifiers are entirely absent.

The Downsides
This is very much a game rather than any kind of simulation, developed from the successful Kings of War fantasy set with very little change in the core rules. Strict historical wargamers who prefer more 'granular' rules might have a few issues, particularly resulting from the IGO-UGO structure. My own main issues were around the historical feel. The book features a set of 'Master Lists', with stat tables for generic units (spearmen, pikemen, warriors, bowmen, skirmishers, heavy and light cavalry, etc.). Then there is an extensive set of specific sections covering historical armies, for example Greeks, Egyptians, Romans, Barbarians (meaning Celtic armies), Vikings, Chinese, Japanese, Normans, etc. etc., extending from a vaguely defined 'antiquity' to the 15th century. Yes, these are medieval rules as well. These army sections are just a couple of pages long (usually including a couple of large photos in the same space), and have very little of the detail you need to form an historical army from the Master Lists. Some stat tables for particularly distinctive units are given, but usually there are only 2 or 3 examples.

The army section might tell you that a particular army can include spearmen and heavy spearman - but which of the units in the army should be classed as one of these types? And what might the proportions of different troop types be in a typical army? The newbie will receive no guidance. The Roman army section suffers particularly strongly from this shallow treatment, being no bigger than any other army section but apparently intended to cover the whole history of the Roman army through all its iterations. Categorising the numerous possible troop types from the master lists would be quite a challenge. So this is a rule set really for those with an established background knowledge of the era, or conversely beginners who aren't really that bothered about the detail but just want a good knockabout game. Those wanting a firm historical feel will need to play a few games, and then gradually tweak the various stats and special rules to get the balance between units that they want.

A possible downside for some is that these rules use the 'bucket of dice' principal to smooth the vagaries of chance. The maximum number I have rolled so far is 25 at once, but the rules allow for up to 90 (yes, nine-zero) dice to be rolled by a large unit attacking another in the rear, which involves a tripling of the possible attacks. This is a bit daft and I have removed the 'tripling' rule, making doubling the maximum possible.

The King Is Dead
KoW Historical came out in 2016, a few years after the original fantasy set. Mantic had a decent forum set up to support both sets of rules, but this December the forum is closing due to the very limited number of posts currently being made. This is a shame, as I feel the rules have a lot to offer, and should be more widely known and played. The determination to create a simple, easily learnt game is impressive in its ambition and has been very successful in its results, in my opinion.

The great thing is that you can sample the basic fantasy rules for free, via downloads from the Mantic website. The fantasy core rules are practically identical to the historical rules - it is the force lists and absence of fantasy elements which mainly distinguish the historical set.

For the moment, I have set aside my own rules and will continue with KoW, which frankly I much prefer. Maybe in the future I will revisit my Trimsos rules, and see if I can simplify them a bit. For the moment, Kings of War Historical comes recommended.