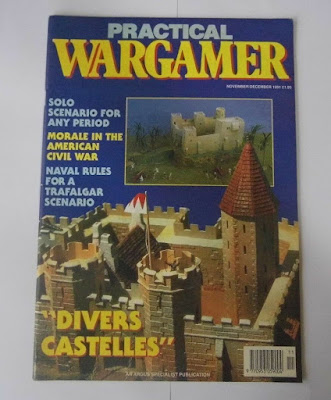 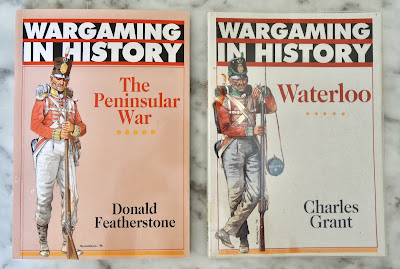 I decided to take a punt and see what those two famous wargaming authors had to say about Napoleonic wargaming back in 1991. Once again ebay came good and I got both books for a total of £25.
The books are A5 size, with around 120 pages each, and black and white throughout. The intention was obviously to provide a background to the period in question, in terms of a basic narrative of the campaigns and battles involved and the tactical and equipment details that wargamers would want. Each book has a short set of basic rules. There are numerous illustrations and a reasonable number of maps.
The basic campaign detail would still be useful to a total beginner in Napoleonics, but the  tactical analysis in both books is a little outdated now. More importantly, both books are too limited by their small size to do their subject justice, and given the limited amount of space I felt there was rather too much history and not enough wargaming.
Donald Featherstone provides a set of brief descriptions of the main battles of the Peninsula War, but these are illustrated mainly with old maps of variable quality and usefulness. There are only a couple of maps which show an actual wargaming set up. Charles Grant has a rather easier task with the more restricted subject of the Waterloo Campaign, and good maps are provided allowing the action of the campaign and its battles to be followed.
But the main issue is the very short sets of wargaming rules included, both consisting of only a handful of pages. Both are interesting as far as they go, with both authors (Donald Featherstone in particular) providing quite original rules which diverge from what might have been expected from each of them. But they are much too abbreviated to be satisfactory - an experienced gamer might fill in the gaps, but a beginner could well end up rather confused. Quite a lot of space in both books is devoted to a description and analysis of Napoleonic tactics, but how this translates onto the wargaming table is much less well covered.
Thirty years on, these books are really only of value to someone like me - a collector of old school wargaming books. As such I'll be glad to have them on my shelves. The tantalising glimpse they provide of what could have been two sets of very worthwhile rules is frustrating but still of interest.
A bit more WW2 gaming to come soon, and a new battlemat to review from Geek Wargaming, so stay tuned.
'Til next time!
Posted by Keith Flint at 11:21 9 comments:

Anyway, issue 403 of WI has an article on Shadow of the Eagles, written by me. It forms part of the 'Designer Notes' series. 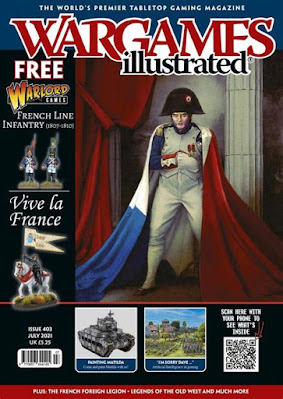 Many thanks to Dan Faulconbridge for the opportunity - the layout/design guys have done a really nice spread for me over 4 pages. I'd also say the rest of the magazine is well worth a look.

I'm hoping to feature an SotE game soon with real Napoleonic figures, so stay tuned - 'til next time!

P.S. - that Napoleonic game can now be seen on the Shadow of the Eagles blog.