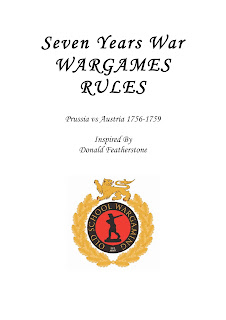 My Featherstone-inspired Horse and Musket rules, now optimised for Austro-Prussian SYW battles, have continued to evolve. Rather than present them as a mega-long post, I have uploaded them to a file sharing site (as 'Horse and Musket Rules') so that you can download them as a PDF and see what you think. One major recent change is to move away from figure or base removal and just record casualties a la Black Powder. This keeps all your miniatures where they should be - on the table.
Anyway, I invite you to take the plunge, download the rules and see what you think. Need I add that comments are welcome? Surely not!
Download PDF
Posted by Keith Flint at 18:59 2 comments:

Just a note to say that my book on the 6th Airborne Armoured Reconnaissance Regiment in WW2 is now available in paperback. The initial printing of 1000 in hardback has run out, but thanks to the miracle of digital publishing the paperback edition can be printed pretty much to order, so the book will remain available in brand new condition for a good while yet.
You'll find the cover is the same. A couple of minor printing errors have been corrected but be advised that there is no new content. However, the good news is that the RRP is a little less than the hardcover edition.
My thanks to Helion for keeping the book in print. Happy reading!
Posted by Keith Flint at 16:17 No comments:

Lobositz: It's A Town Of Two Halves

Not knowing exactly who would be able to turn up, I booked myself a table at Colours 2010 under the name of the North Bristol Wargames Collective. A daft name, but nobody seemed to mind. I did know what battle I was putting on: The Battle of Lobositz (1756), the first battle of the Seven Years War, between the Prussians under Frederick the Great and the Austrians. 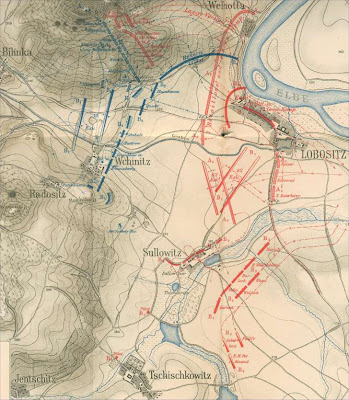 I won't provide a potted history of the battle: good accounts are available at www.kronoskaf.com (follow the links) and The Wargames Room (NZ site - follow the links to Volley and Bayonet then 18th Century Battles). The map above is the Prussian General Staff map made in the 19th century. I was looking for a real battle to have a go at and Lobositz ticked all the boxes: an interesting encounter, relatively small armies, terrain do-able, etc.

When recreating an historical battle I like to keep things as historical as possible, so deployment would be as per the original battle and some scenario rules were enacted to keep things moving along historical lines (all based on using Black Powder of course). For example, the Lobosch hill was classed as rough ground, there were some special rules to limit charges and firing during the 3 moves at the start of the game when swirling fog was deemed to be present, and the Austrian left wing was limited to staying behind the Morellenbach for the first 3 moves. Frederick had to leave the battle after 5 moves in line with his behaviour on the day: the game was expected to last around 9 moves.

The historical forces were around 30,000 on each side. I found I could just about manage to represent them, on a ratio of roughly 1 model battalion to 3 actual battalions. My orders of battle were as follows:

Four gamers turned up on the day: myself and my eldest son Sam (we would be the Prussians), along with Paul James and Andy Potts (both Austrian to the core). We had all run through a practice game on the previous Wednesday, which ironed out a few wrinkles and gave us all some food for thought on tactics. In particular we all resolved to be more cautious on the day, rather than risking a broken brigade or two at the end of the first move! 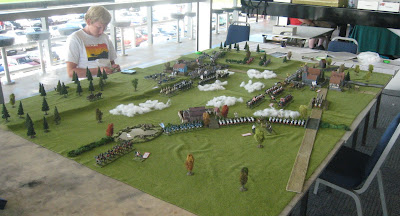 10.00am on Sunday and we're ready to go. We had a nice big table near the window with plenty of room to store all our stuff and keep the table clear of clutter. That's Sam, by the way. You'll have to smoke that roll-up outside, boy. I just hope it's ordinary tobacco. 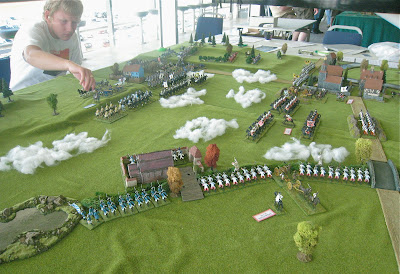 A closer view of the set-up. Austrian left in the foreground behind the Morellenbach stream. Lobositz right background, Lobosch hill centre background. Polyester swirling fog in place. Sam adjusts the position of Schwerin on the Homolka Berg: the King of Prussia can be seen nearby on the same hill. We deployed the cavalry forward of the infantry on both sides, ready for the opening cavalry encounter as per the real battle. 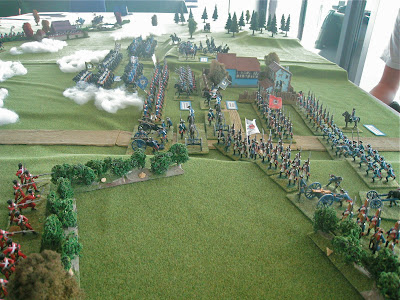 Prussian deployment. In the foreground, Bevern's brigade faces the Grenz light infantry on the Lobosch.Ferdinand is deployed to Bevern's right, with von Kleist's line backing them up. Village in background (blue houses) is Wchinitz.

The Prussian cavalry peers through the mist, ready for the off. Initial cavalry moves were fairly cautious. Frederick is seen behind on the Homolka berg. 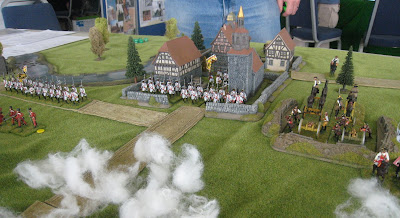 As the light infantry on the Austrian right were pushed back, one of Lacy's battalions fell back a short way to occupy Lobositz. Gun position on the right of picture would prove to be the Prussian's nemesis. 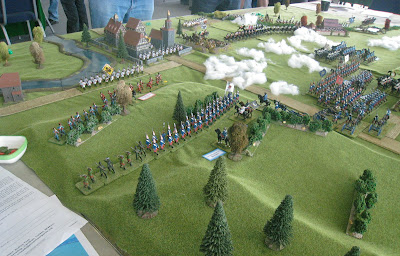 General view as the game got under way. Bevern makes good progress, but in the background two of Gessler's cavalry regiments have been forced back. 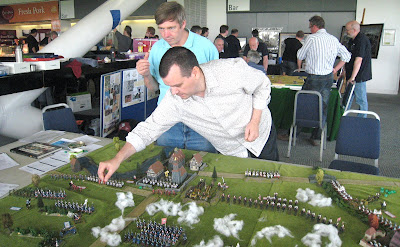 The Austrian players in action. 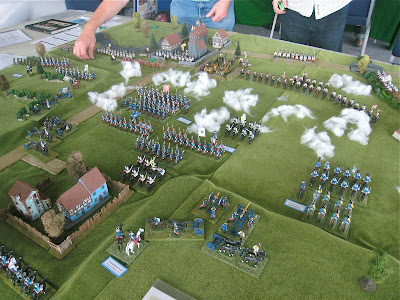 Prussian infantry continues to make steady progress in the centre and left. Frederick decided to personally lead a dragoon charge on move two to restore the cavalry situation in the centre, but miserable dice throws saw the unit and its King thrown back behind Wchinitz (bottom left). At least the Monarch survived! 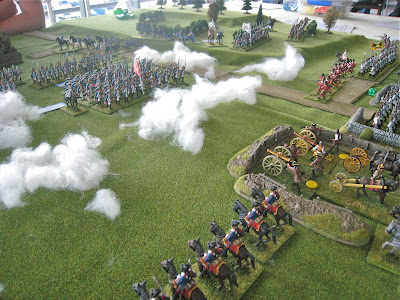 Oh dear: those Prussian infantry are going to get a pounding from the Austrian guns. 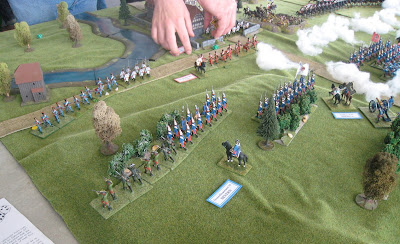 The fog is about to clear. Bevern has taken the Lobosch Hill. A second Austrian battalion is moved back into Lobositz: the unit that moved back previously now occupies the rear block of the town. 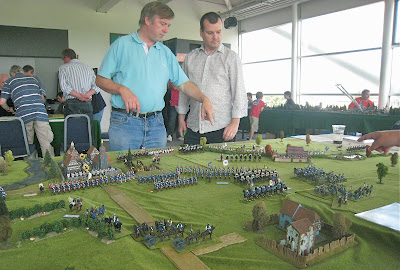 Heavy pointing action in evidence around move 5. In front of Lobositz the Liccaner Grenz battalion make a 3 move stand against a battalion of Prussian infantry, badly holding up the Prussian attack. Damn them! The Austrian left wing is beginning to move across the bridge to support their centre. 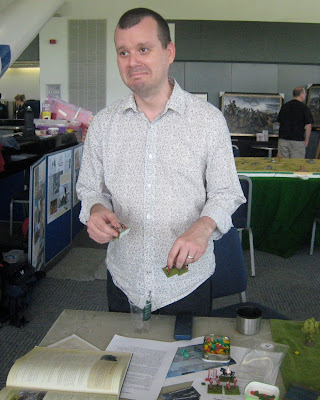 After 3 moves of hand to hand the Liccaner regiment breaks. Andy is torn between pride and sadness as the grenzers return to their box. A touching moment indeed. 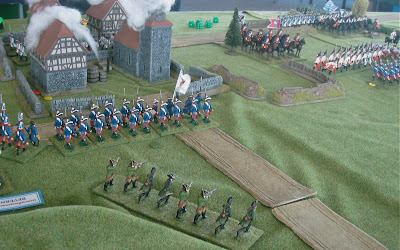 A couple of moves later. Having blasted away 3 Prussian infantry battalions, the blasted Austrian guns have been blasted in turn by Prussian artillery and have broken. A lack of understanding of the rules (and a lack of common sense) cost the Prussians dear: the Austrian guns should have been bombarded before the infantry went in, which would have saved a lot of casualties. On the plus side, close range infantry fire has broken the Austrian battalion in Lobositz. A nice little hole opens temporarily in the Austrian front. 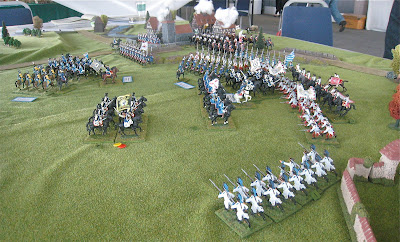 Final move (move 8). The Austrian left wing infantry replaces the cavalry which move round in turn to plug the gap by Lobositz. Austrian grenadiers sally forth from Sullowitz in the foreground. Schwerin's Prussian cavalry are still active as well and manouevre towards Lobositz (centre left of picture). But time is up. By this time (16.30) we were about the only ones still actually playing on our floor. 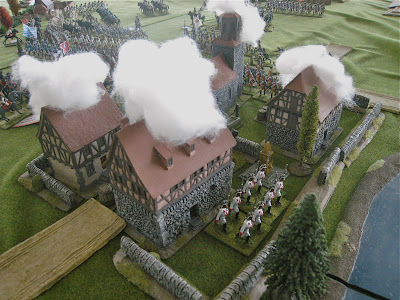 Lobositz at the end of the game. The town was formed of two blocks (hence the title of this report), and one each is held by the Prussians and Austrians. The town is burning as a result of the Prussian bombardment (a scenario specific rule which aided the eviction of the Austrians). Though there was still some life left in the game, a Prussian victory seemed unlikely, so the day was awarded to the Austrians. History had been reversed.

All in all, a truly excellent day's gaming. The scenario worked well and both sides hopes were maintained until the end. Colours itself was as good as ever: a great selection of games and traders in a cracking venue.

Some very good friends of the NBWC were putting on a Spanish Civil War game on the floor above: see the Blitzkrieg Commander forum under 'Shows and Conventions' for a link to a report of their game.

Here's hoping we can think of something equally good for next year! 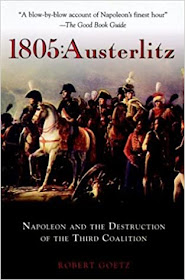 I found this an absolutely cracking book. For the wargamer at least, it must count as the definitive history so far, due to the painstaking detail with which the battle itself is described. There are plenty of maps as well. This a book very much for the reader prepared to carefully work through the text and maps to gain literally a 'blow by blow' sense of how the battle was fought. Some myths about the battle are also authoritatively disposed of. The political and diplomatic background is neatly covered, and there is useful analysis of the qualities of the opposing armies, by an author who is something of a specialist in the Russian forces. Painstakingly researched and strongly recommended.