Just to prove I'm not totally obsessed with the Seven Years War, I thought I would take the opportunity to flag up some progress on the Battlegroup Blitzkrieg front.

This progress was first prompted by the impulse buy of 3 Zvezda Panzer 38(t)s at The Other Partizan. Great models, easy to put together, and cheap as chips. I was so happy with them I bought 3 more - in this way I can have 2 x 3 tank platoons, or 1 x 5 tank platoon. The normal platoon establishment was, apparently, the 5 tank organisation. Here are all six tanks.


You will see I completed them in the two tone brown/grey scheme which is all the rage these days, following the championing of this scheme by Flames of War. I think it looks pretty good. A new finishing touch was using decals to provide the white German crosses. These are always a bugger to paint, and a great advantage of the Zvezda models is that the surface detail is subdued, so that decals can easily be attached to the model without all those rivets getting in the way. The decals are from a seller on ebay - they are cheap, you get loads in different sizes, and quality is good. The Zvezda models don't come with separate hatches or crew figures. To show which of the tanks had the officers (necessary in some BGB armies) I filed the top of the tank cupolas flat, added Peter Pig German tank commanders, and made a quick open hatch cover from plastic card. Simples.

As the title to this post would indicate, the Panzer 38(t)s used in the Polish campaign were assigned to 3rd Light Division, which had 55 of them alongside 22 Panzer IIs. Below I have put together a BGB battlegroup for a modest game. 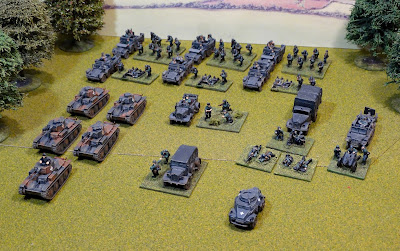 This includes a tank platoon, a motorised infantry platoon with platoon HQ and truck mounted support weapons (5cm mortar, MMG, anti-tank rifle), a supporting towed 37mm Pak36, an Sdkfz221 recce support unit and a battlegroup HQ in a Horch command car. For BGB, I am in fact finding that points spent on soft transport are sometimes wasted - the troops end up de-bussing very soon after entering the table without gaining much advantage from being motorised. However, developing a scenario where the transport is needed and useful (say, an ambush on a German column), could be fun. Plus, I wanted to have a good number of toys in the photo.

Speaking of photos, my recent collaboration with James Roach (thats Olicanalad to you) on the Honours of War rulebook has got me attempting to raise my game in the area of photography. So £89 got me a decent budget full-sized tripod (a Hahnel Triad Compact C5. You can get it cheaper on Amazon but I decided to support my local camera shop). Using this with a delay on the camera to make sure there is absolutely no camera shake has been useful. Also useful is James' tip that you don't need fancy specialist lighting, just make the most of what you have. So the photos above were taken in the kitchen, which has the best and most even light in our current house, supported by a couple of normal anglepoise lamps. Prompted by James, I found that during the 10 second delay one can hold up one or both of the lamps and move them around to get the best picture.

Then of course one uses the editing app of one's choice to improve things a bit more (I just use the standard iPhoto editing procedures on my Mac). There is a way to go yet, but what you see above represents an improvement already. Getting an improvement to pictures of a full wargame rather than carefully posed unit shots will be a greater challenge.

Moving house has meant no games of BGB for a while. We move (fingers crossed) next week, so let's hope I can get the new dining room organised for some gaming asap. I'll have to re-learn how to play the game, but that should be fun in itself.

Next post from the new house. See you soon.