I've been concentrating quite heavily on the SYW for the last few months, what with the new rules in development, so I decided it was time to take a break and try some WW2 to refresh my mind.

Looking for a scenario, my purchase at the recent WMMS show of Jumping Into Hell by Frank Kurowski (about the German Fallschirmjaeger in WW2) reminded me it was time I used those gliders I bought a while back. A quote from early in the book concerning a cancelled operation during the Polish campaign gave me all the inspiration I needed,

Generalmajor Student had wargamed a number of employment possibilities for his small number of paratroops. One of them was to be employed at the bridge over the Vistula at Pulawy. The paratroopers would jump into the area around the bridge, eliminate its security, remove the charges and hold open the route for the advancing armoured forces.

The soldiers of the battalion were already sitting in their transports when the operation was called off. Cursing, they got off the aircraft. It was later found out that the German armoured forces had already taken the bridge in a coup de main. (p.16)

Well, who'd have thought it? General Student a fellow wargamer! Anyway, looking in my copy of Case White, by William Russ, which gives a detailed breakdown of German operations day by day, the nearest I got to any extra clues about the operation was the map shown below. As you can see, there is no indication of tank units crossing the Vistula at Pulawy, which seems to have been taken by the 13th Infantry Division. So where the idea of an armoured coup de main came from I don't know. I found no further clues after the usual trawl of the internet, so I had to go with the scanty details I had. To make a good game, I picked the nearest armoured formation on the map that didn't have Czech tanks (2nd Light Division) as the unit racing for the bridge, which was to be captured in advance by a battalion of Fallschirmjaeger. Alright, not the most original airborne forces scenario, but reading Kurowski's book showed it was a surprisingly common mission in real life, though the number of cancellations was high. Rather like the Allies at the other end of the war. 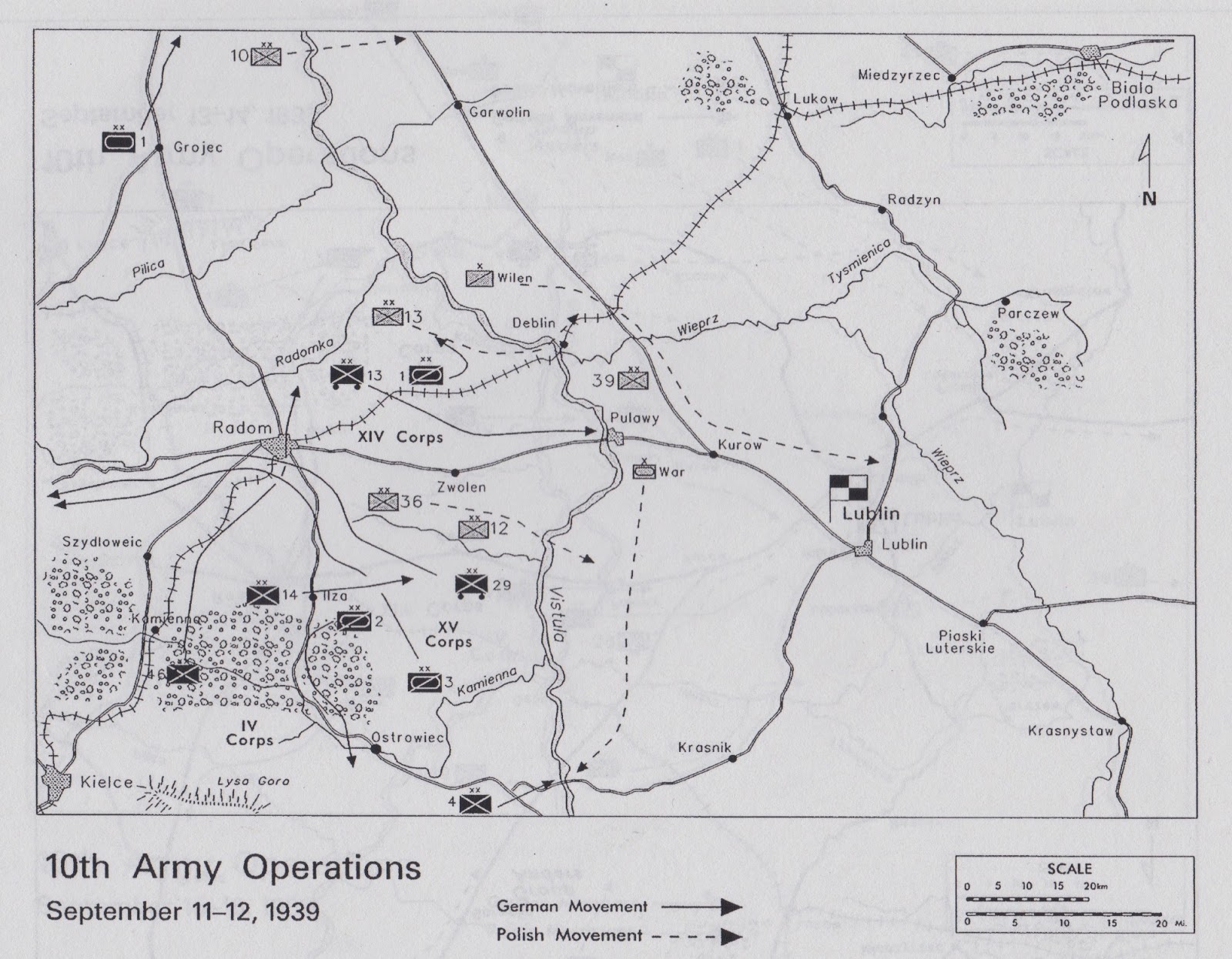 A bridge across the Vistula near the town of Pulawy, south east of Warsaw, has become a vital objective. Retreating Polish forces west of the Vistula are aiming for it as an escape route, whilst German mobile forces seek to cut them off by taking Pulawy themselves. A battalion of German paratroops has been detailed to capture the bridge and hold it, preventing its use by the Poles until friendly armoured forces arrive to relieve them. The map below shows the table setup (6' x 5'). The terrain is fairly flat, with just some low bluffs near the river, but quite heavily wooded.

Overall, the Germans (me) ended up with a fiasco on their hands. The airborne troops cocked up their landing (oh that stream of ones! Unbelievable!), and then were shot to pieces. The reinforcements needed to race for the bridge at all costs, but I got fixated on the Polish blocking position.


In my defence, I think the Polish forces at the bridge were a bit too strong. The heavy fire of 3 machine guns and the Bofors, plus extra flanking fire from the farm area, gave the German paras little chance. This was exacerbated by our use of the 'static hits' rule, meaning no hits came off at the end of the turn. A more sensible bridge force would be a company of 3 infantry units and an mg unit, reinforced by an AAmg unit.

Airborne Deployment
BKC II is a little lacking on rules for airborne deployment, and as in my Airfield Attack game I developed my own. In fact the ones used in this game were a little flaky, so I have now updated them. This is the current version, for early-war Fallschirmjaeger:


Formations arriving by parachute or glider use mobile deployment in their command phase but may be deemed to arrive on schedule if preferred. They always count as attackers. Two units per Ju-52, one unit per DFS-230.
Parachute troops. Mark the intended drop point before game start. Carry out AA fire against transport aircraft using the drop point as the aiming point. Units in aborted aircraft are placed on the nearest table edge; units in destroyed aircraft are destroyed. For each remaining unit (including command units), roll 3D6 and a direction dice and place the unit this distance and direction from the drop point. Then roll a D6 per unit. On a 1, 2 or 3 the unit has not recovered its weapons containers and for the first move has no ranged attacks. It will close assault with 3 attacks only.
Glider troops. Mark the landing point and carry out AA fire against gliders as for transport aircraft. For unit deviation use only 2D6.
Terrain. Any glider or parachute units landing in high area terrain take 6 attacks as if in the open. If landing in deep wet terrain or impassable terrain they are destroyed.
Command bonus. As normal, 2 actions are allowed.
Command blunder. If a blunder occurs, roll a D6.
1, 2 – roll one die for each unit. A score of 6 indicates the unit is knocked out. No saves allowed.
3, 4 – land this turn, but move the drop point or landing point using 3D6 and a direction die.
5, 6 – move drop point as above, but land on the displaced point next turn.


And that, as they say, is that. Good to get the WW2 toys out again, and congratulations to Paul on his victory (the bugger). See you soon.

With Colours 2014 not taking place, The In Crowd decided we owed ourselves a visit to another wargames show. Therefore, Craig, Steve and myself made the journey north to the West Midlands Military Show in Wolverhampton on Sunday 9th March. Many thanks for the lift Craig - you're a star.

Talkin' Trash
So - three wargamers who hadn't met up in a while confined in a car for a couple of hours. Naturally, the conversation quickly turned to... yes, wargaming. If I remember correctly we discussed painting standards and how many hours one could reasonably spend painting a figure, as well as the relationship between painting competitions and wargaming. And then what latest temptations we were trying to avoid, and some stuff about what made a good wargames show. I'm afraid Salute got a bit of a hammering (too big, too crowded, too far away, too expensive to visit), but we all agreed Colours would be sorely missed this year. With myself and Craig contemplating house moves, there was some wistful dreaming about having separate wargames rooms in our new homes, and some discussion of the merits of erecting a big shed in the garden versus going for a proper extension to your home. We concluded that a nice big conservatory makes a lovely wargaming space.

Spendin' Cash
And then we were there. A lovely sunny day, and we celebrated the spring-like feeling by joining other wargamers driving over the newly sprung bulbs to park on the grassed area of the car park. Well, it might not actually have been part of the car park officially, but needs must when spaces are at a premium. No time for sentimentality when there is a bring and buy waiting!

The show is in a large, modern sports hall. The ad promised 50 trade stands and 25 games, and we were not disappointed - this a good size show. The games were just about universally excellent, with a great variety in period, type and size. There was perhaps some space for a few more tables, but generally the hall was well filled, whilst not too overcrowded. Overall, plenty to keep you inspired and interested for a good few hours. Traders were also varied and numerous. We were all glad we went, and will very likely go again. Well done to the Alumwell Wargames Society.

Picture This
And so to the photo report. This is by no means exhaustive, and the pictures were mainly compiled to test out my new camera. Therefore the names of those putting on the games, and sometimes the nature of the games themselves, are mostly missing. If by chance you recognise your game here, please leave some details in the comments section. Personally, I noticed the modest but significant number of quite small games, which might be a trend. And in general, when talking to participants, it was interesting the number of people who were using their own rules. Well done chaps.

Negatives? None to speak of really, except for the continuing grim determination of some wargamers to spend months on modelling a marvellous wargames terrain, then come the great day bestrewing it with playsheets, coffee cups and fizzy drink bottles. Presenters and organisers need to get together to prevent this by requesting/providing more room than the game itself actually requires, so that side tables or vacant space can be used for rules and refreshments.

Oh yes, purchases. Steve and Craig contented themselves with picking up some pre-orders from Pendraken. I bought a couple of books - reviews may well follow. I did however shell out about £55 on 20mm WW2 stuff for my friend Paul. Always a pleasure to spend other people's money!

And remember - if it's square, we ain't there.


P.S. Another blogger has captured some of the games my camera missed. I think the demo games at the show really were of a great standard, so for more proof go to: