I know, I know, you're all desperate to know how the Polish/Dutch airfield attack project has progressed since the last update. Well, things are developing a little slower than I'd hoped (what a surprise!), but they are developing and I should be ready for a game in a couple of weeks. Craig has sent me a photo of the fallschirmjager he will be lending me, now fully painted and based to his usual very high standard. What a lad. 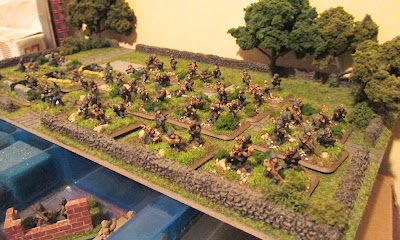 Two great things about having someone else provide these boys - their different style will make them stand out nicely on the table from the airlanding troops, and (much more importantly) I have been spared the expense and time of producing them. In fact, had Craig not stepped forward, the hassle of creating the extra troops may have stopped the project in its tracks at the outset.

The runways are now cut out and ready to go, and I have a couple of very nice card hangars downloaded and put together by Steve, who can do that sort of thing much better than I can. Six Zvezda Ju-52s arrived from Santa on Christmas day, and completing these is well under way. Three are finished, and the other 3 are made up and await painting. I have decided 8 will be needed for the game, but yes, you guessed it, a friend has stepped in to offer 2 more (Steve again). Frankly though, these little models are such a pleasure to build and paint I might be tempted to order up a couple more anyway.

Anyway, the little airfield scene below gives you an idea of how things are looking. The Junkers even come with flight stands which will be perfect for depicting the arrival of the airlanding troops. You know, I think I should have a go at painting the frames on those cockpits. 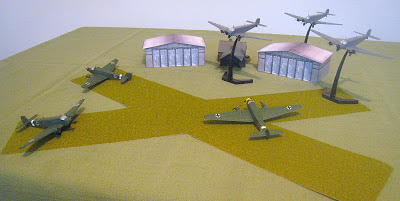 Hoping to offer a battle report in the not too distant future, with a full scenario and force composition. Time to get painting!

This post is a tribute to the very wonderful Kronoskaf Seven Years War Project, which should be familiar to all SYW gamers. It is, of course, a magnificent collection of information on all aspects of the war. One of the best bits is the section on the various battles and smaller actions, which usually includes maps as well as force compositions.

It was in this section that I found details of the Combat of Strehla (1760), which looked like it would make an interesting wargames scenario. What resulted was really a wargame 'based on the Combat of Strehla' (as they say in the movies), rather than any kind of historical refight. I worked up the scenario quickly without too much detailed analysis, to create a game that would test out the latest tweaks to my rules. In summary, the Austro-Imperial forces outnumber the Prussians by 2 to 1, and they have resolved to attack, with the intention of destroying or driving off their opponents. Whilst the poor quality Reichsarmee formations demonstrate against the main Prussian position before Strehla, the better Austrian formations will make a flank attack from the west.

Note that the various commanders are all real officers who were involved in the battle, but one or two had to be juggled around to create the formation commanders I needed for my game.

Victory Conditions
Turn limit is 8 turns. If the Prussians are not broken by the turn limit (i.e. they have not lost half their units), they have won.

The Game
I was able to run through the game twice, once solo and once with my stalwart opponent Steve J. The first game ran to the full 8 moves, resulting in the Prussians hemmed in around Strehla but still unbroken and so technically the winners. The second saw the Austro-Imperials declared victorious in just 4 moves - the Prussians had lost 4 units and the only remaining unit of their right wing (the grenadiers) were cut off and bound to be destroyed trying to break through back to Strehla.

Much depends on how the inevitable cavalry fight between the formations of Kleist and Guasco goes - if the Prussians gain the advantage here, they probably have a chance to win. A rapid sally out by units from behind the Prussian entrenchments in support of their right wing might be another game-winning tactic, but it didn't get tried in my games.


So there you have it. Historical scenarios often give you a nice alternative to just lining the opposing forces up opposite each other and having at it. Thanks to the boys at the SYW Project for once again providing me with information and inspiration. The internet is a wonderful thing!
Posted by Keith Flint at 16:06 6 comments: