My relentless search for other people's scenarios that I can rip-off for my own games has once more borne fruit.
Of late I have been enhancing my moments of relaxation by looking through old issues of Battlegames, and in issues 1 and 2 I found the Battle of Liebenau, a scenario by Jim Purky (aka Der Alte Fritz) for the SYW. Liebenau is a real place where in 1757 a rearguard action by the Austrians against the Prussians was contemplated but never fought.
Deciding to fight this 'might have been' battle, Jim based his scenario on the Battle of Guildford Courthouse, which of course took place in 1781 during the American War of Independence. In Jim's battle the Prussians must overcome the Austrians who are deployed in depth in three lines, as the Americans were in 1781. The narrow table derives from the supposition that the attack is taking place along a valley with steep hills to either side. Jim's map for the battle is shown below (with written permission of Battlegames magazine. If you wish to use this map contact the copyright holder at the email address given): 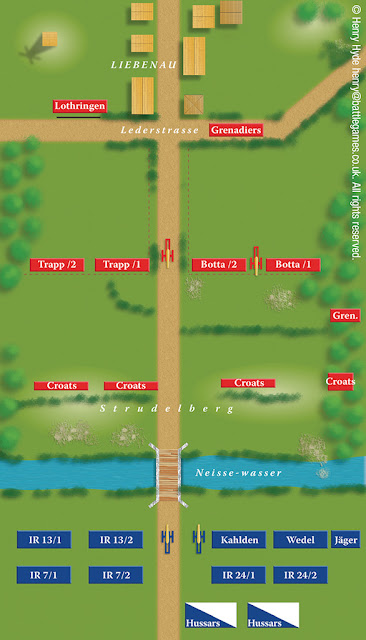 My first intention was to refight the scenario as given, as a straight SYW battle. But something in the idea of defending a narrow valley in a rearguard or delaying action rang a bell. Eventually I realised I was remembering 'Defending the Gorges', a 'real' battle from Fall Weiss, Chris Pringle's 1997 scenario booklet covering the 1939 Poland campaign. Chris's map for the scenario is large scale and rather basic, and covers 3 gorges (hence his plural). For the detail of a battle for one gorge, I thought why not go for a table based on Jim's SYW idea.
There you have it then. From the fictional Battle of Liebenau (1757), via the real Battle of Guildford Courthouse (1781), to 'Defending the Gorge', a representation of 10th Mechanised Brigade's defence against the attack of 2nd Panzer Division in southern Poland, on 3rd September 1939. I have selected the centre of Chris's 3 gorges for my re-fight. Like Liebenau, Tenczyn is a real town, but rest of the terrain is fictional and based on Jim's map. The forces however come from Chris's scenario so should be reasonably correct historically. The game will, as always, be fought using Blitzkrieg Commander. The map below gives the basic layout of the game: the dark green areas are woods. Jim's original table size was 10' x 6' - mine will be 6' x 4'. As you can see the main change is leaving out the river, which didn't feature in the 1781 or 1939 battles: 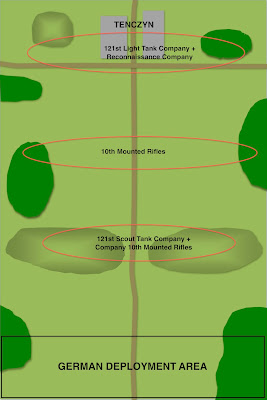 The Poles
The 10th Mounted Rifles, one of the 2 motorised infantry battalions within 10th Mechanised Brigade, form the heart of the defence. The first line consists of the tankettes of 121st Scout Tank Company supported by a company of the 10th Mounted Rifles. The rest of 10th MR forms the second line. The third line consists of 121st Light Tank Company with its Vickers tanks, supported by the Brigade's reconnaissance infantry company. Off table is a 75mm artillery battery and a 100mm artillery battery.
Unusually the Poles will have some air support. Even more unusually we have a brief account of the actual mission, flown by the 24th Reconnaissance Flight, in Tomasz Kopanski's book PZL.23 Karas:
"On 3rd September another bombing raid (six Karases) was flown. This time it was directed against a German armoured column moving in the mountainnous terrain in the area of Rabka-Podwilk. Each Karas carried six 100kg and two 50kg bombs. Having located the enemy column, the Flight crews bombed it from an altitude of 600-800m, obtaining direct hits on some vehicles. Then they strafed the column. German AA defences managed to shoot down one aeroplane."
The Poles are thus granted 2 ground attack units (Karas), along with 2 air assets. As the Germans automatically have full air superiority according to the BKC rules, it remains to be seen whether this air support will get through during the game.
The Germans
Elements of 2nd Panzer Division were attacking the Tenczyn gorge. In the game they are allocated a Panzer Battalion (a total of 10 model tanks), 2 Schutzen Battalions, a reconnaissance detachment (standing in for Jim's hussars) and a strong off-table artillery force of 3 105mm batteries and 1 150mm battery. German air support in the real battle apparently came from a force of Me110 fighter bombers, but I allocated 3 JU87 dive bomber units with 6 assets, as I have a Ju87 model available.
Scenario Notes
The game would be played basically as an assault scenario with Tenczyn as the objective. The points balance was about right, but with the Poles able to deploy further forward than normal and with no flank deployment possible, the turn limit was removed. We would just see how it went.
It is not normal for the defenders to have air support, but as described this was available in real life. To speed things up for an evening game I intended to deploy both sides fully in advance. Aiming points for air and artillery assets would therefore be plotted with full knowledge of enemy dispositions. This rather takes the normal guesswork out of this activity, but the advantage would be the same for both sides' air assets, whilst the advantage to the German artillery would help compensate for the forward deployment of the Poles.
Note there are no FACs, even for the Germans. The rules state an FAC is possible for the Germans, but this seems a bit doubtful to me for the Polish campaign. If one did allow a German FAC in 1939, I think a CV of 6 or 7 would be appropriate rather the 8 given in the rules.
The Game 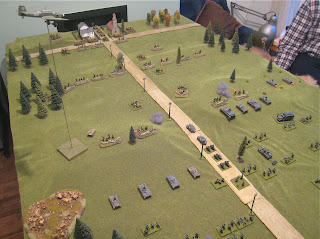 The game got underway with scheduled artillery and air strikes.
The Stukas picked off the exposed TKS tankettes supporting the Polish first line. On the right you can see 2 PzIs that have been caught in a Polish minefield. 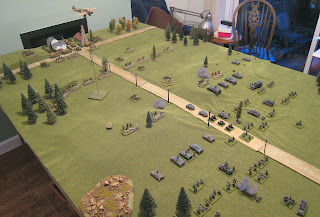 As the Germans advanced (rather slowly), the Polish Karas made their appearance.
They were shot down by a storm of AA fire and had no effect. 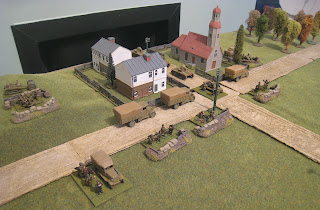 Vickers tanks and the recce company wait in Tenczyn. Bofors AA unit on hill at left: a really useful weapon that makes a pretty good anti-tank gun in this period. 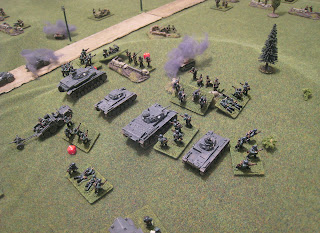 Dug-in troops are a bitch to shift in BKC II: it usually comes down to a close assault. Even then you need to assemble a heavy advantage in numbers to assure success, as here. 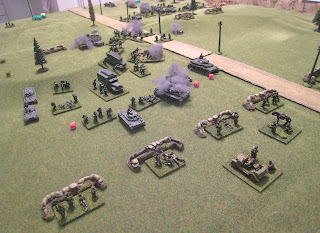 The German right flank has now broken through to the Polish second line. 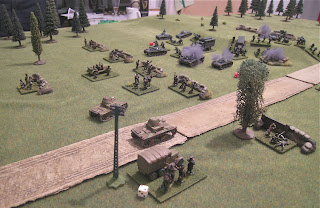 View of the same situation showing the Polish Vickers tanks taking some revenge against the leading German Panzers. 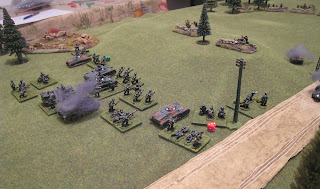 To the left of the road, the Germans failed miserably to make any significant progress, with a succession of failed command rolls. This was their position at the end of five moves: total advance 20cm!
Unfortunately that was as far as we got. That was the end of move 5 and we had run out of time, mainly due to being rather rusty with the rules. We had gamed from 8.00pm to 11.00pm, with half an hour of pre-game preparation and then taking an average of half an hour per move. Although the game was unfinished, and neither side was anywhere near their breakpoint, I would give a moral victory to the Poles who seem unlikely to be shifted from their second line. The Germans were not really on form and their left flank was a disgrace - some demotions seem likely! It was interesting to see what a tall order breaking through 3 lines of defence is, even when there is a reasonable superiority in numbers.
Despite the frustrations, we found we had enjoyed ourselves and a pleasant evenings wargaming had taken place. BKC II is always a pleasure to play.
Finally, it's great to see the number of followers of this blog increasing. Thanks for your interest, and for the interesting comments that have been coming in recently.
Posted by Keith Flint at 14:43

Once again a very nice scenario Keith. One of the great things about BKC is the ability to alter the standard forces available to suite historical actions.

As for the German left flank, well, what can one say? Sometimes these things happen.

Breaking through dug-in troops is hard as you say. To break through three lines may have been a line too far.

Inspiring as usual! I like that you explain your scenario design process, I find that very helpful as an amateur to the hobby :-)

Great looking battle Keith. BKC is such a good game to play. Nice blog too.

Great AAR. It's nice to see the Polish represented. Thanks for sharing.