How does a new project start? It's often hard to pin down. But a week or two ago something made me get these old WRG rules down from the shelf, where they have lingered for at least 40 years. With a couple of house moves in recent years prompting the need to slim down the bookshelves, many of my old rule sets have made their way into landfill. But these guys have always been retained. 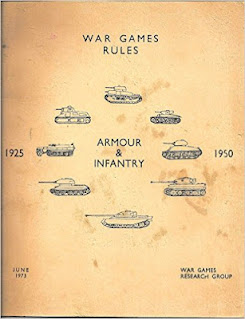 I can't claim to have ever been a big player of these rules, but I did play a game or two back in the day. Even then they seemed like a set that had potential, rather than a really finished product. I ended up developing my own WW2 rules, which eventually got over-complex and were dropped in favour of the old Peter Pig rules, Abteilung. Since then it's been a succession of commercial sets, leading to my present use of the Battlegroup rules.
Back To The Future
Battlegroup have always been good fun, and I've had some excellent games with them. But I have always had some reservations. I won't bore you with the details, but overall I often had the feeling they were just a bit too much. Big coffee-table books, with lots of special rules and detail that could produce interesting game play but were also easy to forget about if you didn't play regularly. These rules had chrome with a capital 'C'. The other main thing was that they were, at heart, a set for individually based figures of at least 20mm size, which had an alienating effect for someone using 15mm figures based in groups of four. And I never really worked out the difference between Points Values and Battle Ratings.
And so one evening, there I was with a copy of the 1973 WRG set in my hand. Hmmm, these look pretty simple. And the whole set (covering everything from the Spanish Civil War to the Korean War) is about 35 pages in a book smaller than A4. Perhaps there might be something here for the occasional WW2 gamer.
The main thing I remembered was the 50mm infantry move. Just 2 inches? Right from my first reading of the rules all those years ago, that simple fact had told me that these couldn't really be a serious prospect for proper wargaming. But giving them a good re-read (or two) convinced me that there was an absorbing project here - revising the rules to my own satisfaction for a more straightforward WW2 gaming experience. And the first thing I would do was simply change that 50mm move to 100mm.
Over the years I've been pretty disparaging about a lot of WRG rule books - in recent times, the old 'ancients' books in particular. The successor to the 1973 WW2 rules, which came out in 1988, I found to be genuinely and grimly unplayable. They went to the council dump many moons ago. But the 1973 book always had the feel of a classic that perhaps I didn't fully appreciate, but might do one day. That day appears to have come. Here I would like to quote the man himself, Phil Barker, from a 1980s article in Miniature Wargames magazine:
"It does a rule writer no credit to fail to acknowledge his debt [to older rule sets], or even to blackguard his predecessors. Something can be learned from all of them, even if only what to avoid".
Indeed. It is easy to pick holes in forty-year-old rule sets with the benefit of hindsight. But on the other hand, it can't be denied that 'what to avoid' is sometimes only too apparent. However, enough of that.
Forward To The Past
And so off I go. I've started my re-write, and played a single test game (solo of course). I believe I may be on to a winner. There is much I will change, but there is also much to admire; like the simple fire-before-moving sequence which makes excellent sense in a WW2 game, and the straightforward yet mostly satisfying firing procedures. And one particularly brilliant aspect is the absence of any kind of 'melee' or 'close combat' rules. They are simply completely absent, with the possibility of such processes unmentioned. So close encounters between opposing troops are simply resolved by the standard firing rules, which seems to work very well. And as we all know, that's exactly what resolved 'close combat' in WW2 encounters - firing at very close range. The final clincher may well be that this is a set of rules firmly based on infantry 'elements', meaning groups of 4 figures mounted on a single base. That's more like it!
I'll keep you posted. And rest assured, if I develop anything like a workable set, it will be shared online. Right up to the point when they become the top-selling set of rules for WW2 miniatures!
'Til next time!
Posted by Keith Flint at 19:02

An interesting new project for sure Keith. I tried Battlegroup and enjoyed my game with your good self, but they just didn't click for me. Maybe too much chrome as you say, but certainly some gaps that I couldn't quite square with the explanation of why they were 'there'. In the end I've stuck with BKCII as I know the rules well, they give a good game in a reasonable amount of time and the familiarity makes it easy to create scenarios, OOB etc.

IMO there is a lot to like about the 1973 WRG rules. What I particularly like is that they are built around a few consistent and simple mechanisms that can easily be tweaked or fed different data. All of my WW2 gaming has always employed the 4 man element, so I will follow with interest...

Just seeing the cover caused an instant nostalgic pang! I played these a ton as I started out, with H&R 5mm armies.


I always liked the simplicity of the armour gun / penetration system and thought that the 'slow' infantry worked well to push the game along a 'mechanised warfare style' in which infantry were in fairly static positions that had to be taken and the advantage of mechanised infantry then became elevated.

I too prefer going back to simple rules - Donald Featherstone War Games 1962 WW2 simple rules - and his Close Wars appendix - still work for me with tweaks with 15mm Peter Laings.
https://manoftinblog.wordpress.com/2016/10/02/ww2-platoon-level-close-little-world-wars-rules/

I picked up the 1988 version of these rules in a second hand book shop years ago but never could bring myself to play them. I did find the technical information useful and used it to adapt Charles Grant's 'Battle' rules. It seems you are off on another interesting project Keith. Looking forward to developments. Best wishes. Jim

Yup, I think my tattered copy is still around. Not the micro armour we used to use in the 70s and early 80s though.

What an excellent project... I remember these rules fairly well, but my regular opponent and I used Firefly which to modern eyes now look positively frightening for the level of 'detail' (read number of tables)... he computerised them if I remember rightly on one of the earliest home computer setup's(Atarai ST??)

I had my own copy of Firefly and never played them. 'Frightening' would be about right. It never ceases to surprise and confound me how many gamers enjoyed rules like Firefly or the 1988 WRG rules. I couldn't even fathom out how to play them!

I have 2 copies of these rules myself. Both with the same cover as those shown. In the past I often used them for a quick spur of the moment game.

I still the 1988 set and am considering them for 6mm Spanish Civil War games - the figures have been around for 2o+ years and constantly land on the back burner. It occurs to me that the infantry rule should be randomised, one D6 for 'normal' moves and 2 D6 for human wave attacks etc. You can rationalise any short moves as infantry moving in spurts to avoid casualties and faster moves as bouts of recklessness or resolution, possibly with political officers 'encouraging' the men. this way an amount of low level activity can be simulated with no slowing down of play and makes infantry more potent. Tanks should not dominate the battlefield, but be a potent threat in the right circumstances.
John Koziol (PS - played the period on and off since the 70's, but found most rule sets favour Germans.)

Great post Keith, interesting to see how they develop, I was only looking at my copy a few weeks ago and thought about giving them another run out.
Cheers
Stu

Intriguing to see the old WRG rules once again, these provided very many games as schoolboys with 1/72nd (-ish) scale forces rather smaller than WRG had intended. We did tend to forget the morale rules, though ...

I still like and occasionally adapt the A to F armour classes, which seem to be stuck in my mind over the decades. However, the Tigers with the same class side armour as on the front made them particularly tricky to tackle with Russian or British guns. I seem to remember a review by an American who was outraged by the effectiveness of the good old British 6-pounder ...

If I remember correctly, 'overrun' combat was dealt with very neatly by giving infantry a much higher chance of knocking out their opponents at one inch range -- something other rules might borrow ?

Yes Nick, you're right about the close combat thing. As you say, a neat idea. Avoids that whole extra section which most WW2 rules have, and which tends to be hard to remember and play.