It's not often these days I buy anything significant for my wargaming. Firstly, money is very tight so I find it hard to justify even a modest purchase when cash is needed for important things like food and petrol. More positively, my three collections are perfectly adequate for my purposes and I can have a good game with any of them without having to worry about needing more stuff. I find these days the butterfly impulse is very weak: without meaning to give offence, I find the attitude of 'oh, I've just seen those new figures and I just had to buy them' a bit daft. People even do this when the 'new figures' aren't in a period they currently wargame, or when they already have a perfectly good collection in that period. I guess for those with more time and money than me, this is one way to get enjoyment out of the hobby. But I'm afraid my response to such statements is usually something like, come on, get a life. I'm just being honest here.
Further to this point, I mentioned in the previous post that I have been reading through old issues of Battlegames, and this included the regular 'Forward Observer' column by Mike Siggins. The column has recently come to an end and I shall miss it, but Mike was an unreconstructed butterfly who couldn't seem to resist anything new. I remember my astonishment (mixed, I have to admit, with a feeling of considerable superiority) when in the very first issue of Battlegames Mike congratulated himself on 'focusing down' to 'just ten projects'. Ten projects! Was this guy nuts? You can't possibly do justice to that many projects if you live a normal life. Surely even a full time wargamer would have trouble getting on top of ten projects? But there we are. Mike is an example of a wargamer who enjoys getting into everything. Maybe I'm just a miserable old git. Maybe there's no maybe about it.
Anyway, moving on, I did weaken recently and posted off for a few things. On the Polish front, Battlefront Miniatures received an order for the new Polish Dice Set. I know, I know. Come on, get a life. But I'm afraid themed dice sets are a definite weakness of mine. Unfortunately, the national symbol on these sets now appears on the six rather the one, as the comparison with the old German dice set below illustrates. Why this has been found necessary beats me, but I guess it doesn't make a great deal of difference. I'm quite happy with them. 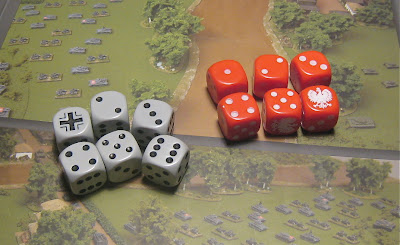 Also in the order was an Sdkfz231 6-rad armoured car, another fairly recent release from Battlefront in connection with their new Blitzkrieg range. Unfortunately these models only come in twos, even if you only want one, but the model is only available in 15mm from this manufacturer and I have wanted one for a while, to give my recce units a bit of real early war flavour. The photos below show what a very nice model this is. The resin cast body is beautifully done with no flash or imperfections, and the metal parts fit onto it nicely, although they do need a bit of filing and cleaning up before use. The top three photos give you an idea of how the vehicle looks after construction. 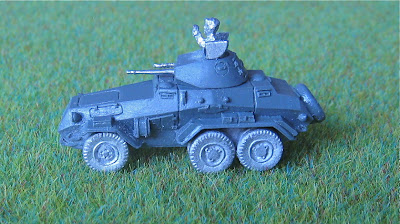 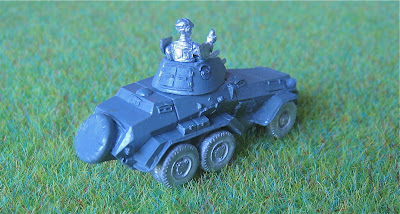 As for painting, those of you who want to know how a master does it can refer to this tutorial. For myself, I did a quick job with Humbrol paints. First I undercoated the metal parts in panzer grey, then once dry I gave the entire model a coat of the same. The wheels and underparts got a dry brush of dark earth, then the whole vehicle received a dry brush of khaki drill. And that was about it. The commander was painted black with blobs of flesh in roughly the right places. The only fiddly bit was painting the white crosses. 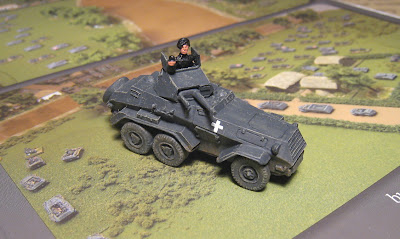 Now personally I think that looks fine for a wargames model. As I have said before on this blog, painting is about my least favourite part of the hobby so I like to keep things to a minimum.
Finally, deciding I 'needed' some additional Polish machine gun teams, I thought I would check out the new range of 15mm figures available from Forged In Battle. Once again I had to order a blister pack of models which was more than I wanted (are you sensing a pattern here?), but the figures that arrived were excellent and are a very good fit for my True North infantry, though just a little smaller and finer than Battlefront figures. The Forged In Battle site shows you how these figures look painted, so here they are as they come out of the pack. I would heartily recommend a look at this manufacturer's products. 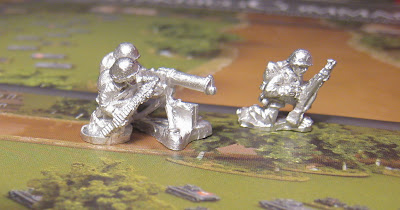 And that's about it for now. Some modest SYW additions have also recently been made, but they will have to wait for another post until some painting has been done. I also want to show off the civilians I acquired recently from Hovels and Willie Figures which are now mostly painted.
Good gaming until next time.
Posted by Keith Flint at 22:39

That Rad 6 turned out nicely.

I didn't know FIB made Poles. Thanks. I'll have to keep the FIB figures in mind for the someday when I can do Poles to fight my Panzer Is.

Being on a tight budget is good for stopping the impulsive "Oooh shiny" purchases isn't it? Somehow my lead pile keeps growing inspite of it.

Great post, I must admit to being a bit of a figure whore myself, I'm trying to get 4 things finished, I just can't seem to stick to one thing at a time, not sure why, boredom I suppose and a little bit of greed too!!I like the look of the Sdkfz231, although, I don't know that much about WWII vehicles.

I don't do the periods justice! That was the balancing point of the column. There was one where I said, with hindsight, "Choose one scale and stick with it. (30mm, since you asked.) Choose one main period, and three subsidiaries if you really must. Always build forces for both sides in those periods, and get a big table."

Mike, thanks for taking my intemperate comments in good part. Didn't imagine you would actually be reading the blog!

Thanks for all the comments guys.

My spies are everywhere, Keith. Just be careful to check under the kitchen table.

My weakness is liking the figures, or models, regardless of period. And of course the column sort of drove The Cult of The New.

That was an excellent link on tank painting, by the way.

Excellent post Keith. You are right BUT, I love the wee guys and just can't help myself. I NEED them...