First Battle of Mechilli - The Refight 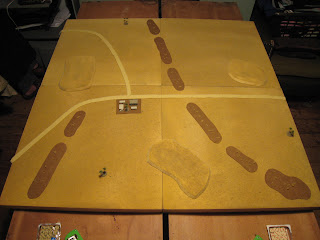 A reminder of the set-up. Palm trees added from solo run to give a real
desert flavour! Italian baseline to left, British baseline to right. Deployment of 42nd Artillery Regt. in and around Mechilli. IIIrd Medium Tank Battalion, deployed on Ras el Mechilli, can be seen on the left. The light tanks were deployed west of Mechilli, just off the bottom left of the photo. The Italians were commanded by myself. 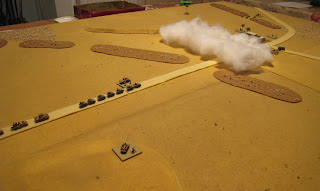 The British were commanded by Paul James. Foolishly, I mentioned in the previous post about this battle that the tracks were really only there for visual effect. Paul rather disagreed with that and decided to attack down the track in column! This is the end of move 1. As there was only one British artillery unit (just 3 attacks in BKC) there was not much chance of inflicting significant damage with the artillery, so Paul decided that using smoke might be more useful. The British FAO is seen on the hill in the foreground. 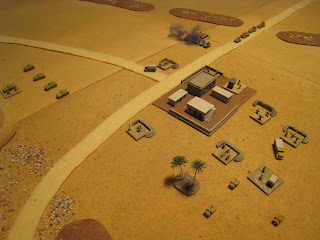 Paul didn't get as many orders in as he had hoped during the first 3 moves, but he managed to deploy his light tanks off the track on the Mechilli side of the Wadi el Ramla. Unfortunately the Italians then took the initiative and in move 3 managed to knock out 4 MkVI tanks. The light L3s have moved up to support the infantry in Mechilli. 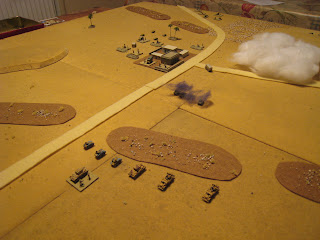 On move 4 the Hussars pulled back, after first knocking out the 47mm ATG guarding the track at Mechilli. The artillery covered their withdrawal by plastering the Italian M13s with smoke. 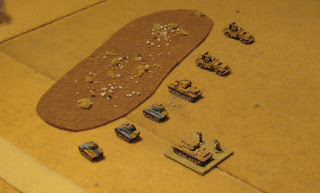 A reduced 7th Hussars (with their attached portees) consider their next move. 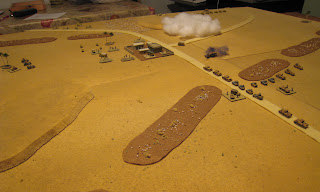 Overview later during move 4. 2nd RTR have arrived, and Paul is determined to continue with the use of the Mechilli track as his main axis. The 11th Hussars have used flank deployment and are approaching Mechilli in the left of the picture. On the Italian baseline, their reinforcements have also arrived, but failed command rolls are preventing their effective advance. Bersaglieri can be seen on the left, medium tanks on the right. The 75mm battery is behind the crest of the Ras el Mechilli. 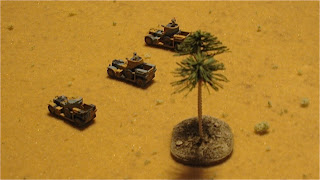 Move 4 and 11th Hussars arrive on the Italian right flank. Discerning readers will note that 2 of these Rolls Royces have had a quick conversion job to give them an open topped turret with anti-tank rifle. This gives them some fighting power against Italian tankettes and armoured cars.

Closer view of the Italian right flank. The Italian command rolls are only intermittently successful, and the orders to face the new threat are so far not forthcoming. 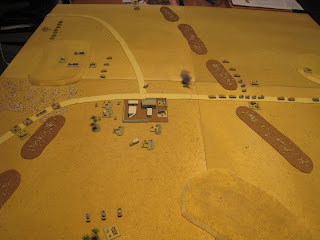 End of move 4. The smoke has been taken away. The Bersaglieri and the 75mm guns of the 12th Artillery Regt have managed to make a move forward from their deployment area. 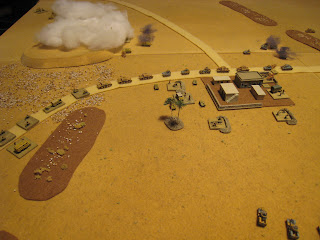 Move 5. 2nd RTR have got in a number of orders and have pushed down the track past Mechilli, distributing fire all around as they go. Smoke again covers their right flank. With suporting fire from 7th Hussars they have taken on IIIrd Medium Tank Battalion decisively, knocking out three and pushing back the fourth. 11th Hussars have managed to knock out the Italian 20mm AA gun on their side of Mechilli.
The Italians in Mechilli are reacting with some return fire - one of the MkVIs in the column has been suppressed, and will be knocked out next move. The British tanks are now head to head with the Bersaglieri, who are desperately trying to clear the line of fire of their anti-tank gun and bring it into action. Behind the smoke, the strong V Tank Battalion have finally passed a command roll and are heading over to counter the British tanks. Any thoughts they had of advancing across the Wadi el Ramla have been abandoned. 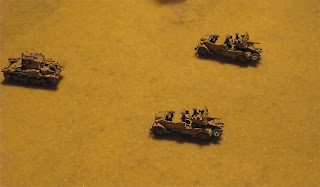 A9 and portees of 7th Hussars providing supporting fire for 2nd RTR, as the game moves into its final phase. 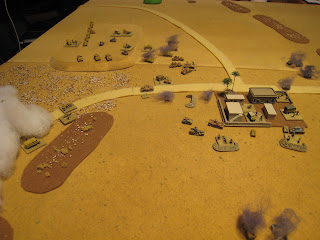 Move 6. 2nd RTR abandon the track and send the A13s of 'A' Squadron across the rough ground to face the advancing Italian tanks of Vth Battalion. The rest of the regiment is off hunting L3s around Mechilli, and 2 of the Italian light tanks have already been destroyed. A solitary A9 is left to face the Bersaglieri. An attempt to mask the Bersaglieri with smoke is only partly sucessful - you can see the 47mm gun has scored 2 hits on the A9. 7th Hussars are back in the game (with a run of 4 successful command rolls) - the A9 and portees move forward to assist against the Italian mediums, whilst their light tanks have got in amongst the Italian 75mm battery. This latter unit has suffered from failed command rolls and has not even managed to deploy properly. It has been forced to do so by the destruction of its transport, and the command unit has been overrun and forced to join one of the gun sections. The initiative is now very much with the British, with the Italians on the back foot. However, the Italian infantry in Mechilli continue to fight back and claim a MkVI on the main track, as well as 2 of the Rolls Royces from 11th Hussars (foreground). 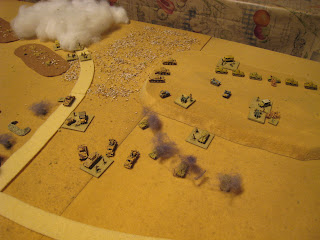 Another view of move 6, concentrating on the Ras el Mechilli area. 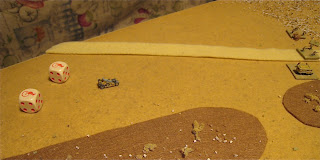 Move 7. Holy double Jerboah! The only double one (command bonus) to occur in the game. 11th Hussars, having lost 2 armoured cars to the anti-tank rifles of the Italians at Mechilli, pull back the surviving car which now tries to infiltrate in behind the Bersaglieri. 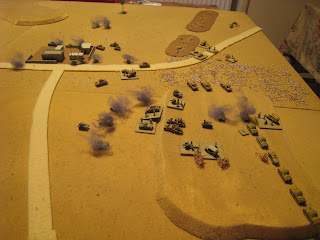 Overview of move 7, the last of the game. There is fierce fighting on the Ras el Mechilli, the British losing a MkVI to opportunity fire whilst the Italians lose the leading M13, plus another suppressed. However, the decisive action takes place in Mechilli. In the British phase, the last L3s are destroyed and the 'Defence of Mechilli' rule comes into force before the Italian phase commences. Unfortunately there are 6 British AFVs within 10cm, so 6 dice are rolled and all the surviving Italian units fall back more than 10cm and are destroyed. This takes Italian losses to 17 units, 3 over their breakpoint. They must try to score 5 or less to carry on, but predictably they fail and so the British win. British losses were 8 units (all AFVs). They have achieved one of their minor objectives by capturing Mechilli and so claim a minor victory.
The Italians must abandon the area.


Wash Up.
A good game, which took three hours to play. The scenario fulfils a number of the conditions mentioned by Bob Mackenzie in his blog article - most importantly, although an attack/defence game, the defence is a mobile one and there are many decisions to make on both sides. Both players had plenty of opportunity to move lead and roll dice. I congratulate Paul - his determination to push up that track, and keep pushing until he was right in amongst the Italians paid off in the end. 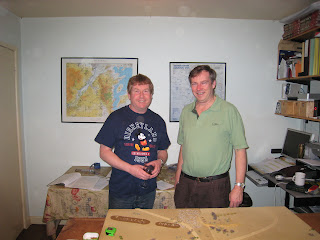 Myself on left, Paul James on right. I think our next scenario will be Seven Years War, so watch this space.

Steve - got your comment but clicked 'reject' by mistake! Sorry.

Thanks and best wishes, Keith.

Wow - now that looks like it was a great deal of fun! Excellent to see such a detailed battle report - makes me want to paint some little tanks!

We’re youbusing inches or centimeters? I’ve converted a couple of scenarios from CD to BKC. Some of them are quite large.

How did you change the arty - this seems to be a point of imbalance.