In Which I Actually Play A Couple Of Games

Yes comrades, a lot of my time recently has been spent in front of my laptop trying to develop an updated version of the 1973 WRG Armour and Infantry rules. These efforts are now bearing some wothwhile fruit, but it was good last week to be able to indulge in two real wargames with real opponents. We all have our own individual ways of enjoying our hobby, and for me in the last few months this has meant too much time researching and writing, and insufficient time actually wargaming. I needed to remind myself why all this research and writing was taking place.
Game 1 - The Battle of... erm... Roy's Wargaming Room.
It was way past time for me to return the remaining figures that Roy had lent me for my Waterloo game in early August. So it made sense to arrange a game at the same time. Eager for a change of scene from WW2, I took up Roy's suggestion of a game of Armati, one of Roy's favourite ancients rule sets and one in which he is well practised. We used Armati 2, an update of the original rules dating from 2004, and although to gamers of my age this seems like a fairly recent publication date, in the rapidly changing world of wargaming rules Armati 2 is out of print and quite hard to get hold of.
This is a shame, as the games I have played under Roy's guidance have revealed a basically straightforward set which requires players to use historical tactics and which plays quite briskly. This particular battle pitted late Romans against a Goth army in the mid-4th century C.E. This was a battle quickly set up 'on the hoof', and I'm afraid I can't give details of all the units in use, but the Gothic army was, of course, larger, a bit lower in quality, and had lots of cavalry. The figures used were 20mm in size and mostly Newline Designs - a very impressive collection indeed.
We each set up behind a blind lowered across the centre of the table (a lovely old school touch which is part of Roy's very fancy wargames room). We found we needed a table extending to 8 feet wide to fit in the armies in use (particularly the Goths), with their very linear deployments, but depth was kept to 4 feet. The terrain was simple, but a sketch map is given below. Two gentle hills, two woods, and a road that was basically decorative: 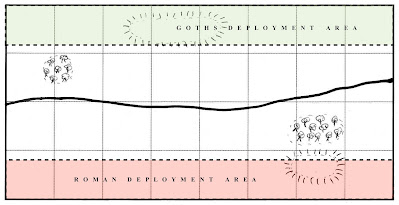 You can see that the Goths had a second line of infantry, but under the standard Armati victory conditions my army buckled before they could be engaged. So, I lost the battle but had a couple of very entertaining hours gaming. I am currently wondering whether some of the approach of these rules (mostly regarding movement restrictions) should be incorporated into house rules for Kings of War Historical, the ancient set I am currently using. KoWH is good on playability, but its roots in fantasy gaming mean that historical flavour is sometimes lacking.
Game 2 - Poland, early September 1939
Game 1 was Monday, and Friday saw me heading up to Birmingham for a WW2 game with Paul. It was time to test out the latest version of my WRG amendments.
I chose to use a scenario from the Battlegroup Blitzkrieg rule book, entitled 'Forward The Uhlans'. This pits Poles from the 10th Mechanised Brigade against Germans from the 2nd Panzer Division. The terrain was as per the book, whilst the OOB was amended for the WRG rules - basically, this was an encounter battle with each side having 2 platoons of motorised infantry, 2 platoons of tanks, and some fairly light off-table fire support. Oh, and a couple of recce units out in front for the first couple of moves before the main forces entered the table. For a change, the baselines are the short edges of a 6' x 4' table. I brought over my 15mm Poles, whilst Paul provided (and commanded) the Germans.


In the end, the engagement turned into a bit of a slugging match, particularly in the village, which the Germans won. The German attack against the farm succeeded, with many Polish tanks lost. Both Polish tank platoons ended up under half strength, whilst their German opponents only lost a couple of vehicles. It was time for me to head home, and I had no choice but to concede to Paul.
This was a very valuable playtest, which showed up issues in the amended morale rules and in one or two other areas. But the basic moving and fighting rules seemed solid enough, and work quickly and simply - a tribute to Mr Barker's original work.
Gaming is Good
As usual, it was good to get playing again. Sometimes I find it strangely easy to lose sight of the fact that playing games is the core of the hobby! I was fortunate to have two excellent opponents, both knowledgeable but relaxed in their approach. Just what I needed.
Well, the Cotswold Wargaming Day beckons on Sunday next. Should be a blast - a report will surely follow in the not-too-distant future.
'Til then comrades!
Posted by Keith Flint at 14:34

Two lovely games. The point you make of reminding ourselves why we devote so much time to research / rule writing is well made ….. the game IS the thing!

After enjoying last year so much (and buying one of Chris’ paintings!) it is most Unfortunate that I cannot make Cotswolds this year … other distractions abound! Have a great day there.

Thank you Norm. I hope you can make next year.

Two nice games there Keith and great to know you had a nice time in both of them. I haven't gamed at home for ages, despite being able to put on small solo games quite easily. The motivation hasn't been there for some reason plus 'real life' has taken a lot of my time and mental energy over the Summer.

Post CWD I hope to get back to some for of weekely gaming now that Autumn is here and the weather might begin to turn for the worse.

Following this with great interest, as the 1973 WRG Armour & Infantry are my favourite set of wargames rules, and I recently obtained a copy, having lost mine many years ago.

I would really like to know more about the modifications you are making - the main thing I think the rules as published lack is anything on troop quality and its impact on morale and possibly neutralisation.

Nice to hear from you James. It would be great to have input from someone who is a genuine enthusiast for these rules. I'll email you the file of my latest version.