Covid once again dictated that I would have to continue playtesting Shadow of the Eagles solo, using my SYW collection. For this particular game I went back to a battle I had enjoyed back in 2012, which in turn was based on a vintage game from back in 1979. The original post tells the story. 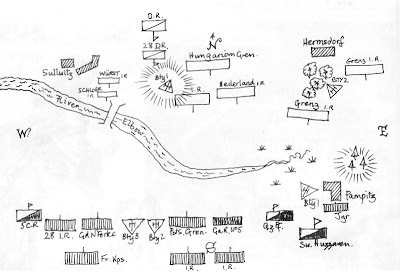 Anyway, here in 2021 I kept the same set up and number of units, but re-designated them for a playtest in the Revolutionary period. My Austrian figures would be playing themselves, just projected about 35 years into the future. My Prussians, however, faced the ignominy of representing Revolutionary French forces. Well, at least they had blue coats. The respective OOBs were:


Overall an enjoyable and valuable playtest. The plan at the moment is that when the money starts rolling in from the published rules, some 15mm real Napoleonic armies will be obtained. Probably second-hand already painted units from Hinds. Yes, I'm afraid my painting days are over. A bit of re-basing and fixing-up will be quite enough work. I'm thinking 1812, French+Allies vs. the Russians. I guess we'll see.
For now, stay safe everyone. 'Til next time1
Posted by Keith Flint at 13:28

A lovely looking game and with a nice little scenario too. Good to see you giving the Revolutionary Wars a run out, as I plan to game this period when the Pendraken Miniatures new range is released.

It's always nice to read a new report. Many thanks for your work. I love your style of table.

I too love your style of table and, as always, your reports make me want to play. I am still pondering your comment about playing towns as woods. The idea sounds convincing but then so did the method in Honours of War. Best wishes and stay well. Jim

What an attractive looking game, your bases blend so in well. Great stuff.
Regards,
Paul.

Lovely game!
By coincidence we chose to play the very same scenario!
(Posted at HoW forum)

Thank you Dindin. Your post was my inspiration for resurrecting the scenario.

I thank you for the initial inspiration! I mean I also posted a solo game!
It is a scenario that could be played for any Horse and Musket period and you already did this transition to the Revolutionary Wars! Excellent! I'll keep it under my belt! Cheers!

Keith,
Great looking game and collection. I feel your frustration with the Covid and have done a few solo games myself - though I am fortunate that my oldest is still at home. On the other hand, like you, I'm trying some new stuff especially in the solo gaming realm. Again, great game and Battle Report.
Neil

Lovely game Keith. It has the feel of those French in Italy battles which swayed between the combatants and were influenced by indivdual units and brigades pushing forward and then being pushed back until one side or the other had no more to give.

A delightful looking game (I had to search for an adjective that had not been used already!). Beautiful figures on a splendid table.
Regards, James

A fine looking game. It was nice to see the mechanism of a unit breaking down into skirmish formation as appeared to happen (though not then necessarily falling back). I'm slightly puzzled by the lack of skirmisers ahead of the French attack. My impression is that this was a frequent part of the 'softening up' process along wqiht artillery bombardment.