Browsing the Vintage Wargaming blog, once again I came across an 'Old School' style hand-drawn map that seemed set to inspire a game. You can see the map below, which originally appeared in the Wargamer's Newsletter of January 1979. It is the work of a gamer called David Barnes, and I urge you to visit the Vintage Wargaming site and check out the 3 posts featuring his work. David was obviously a highly talented illustrator and his battle reports are a real treat to read.
I played through this game a couple of times solo, as a playtest for my own SYW rules. I added in a few extra units as shown in the map below to make a more testing battle. It seemed from the original battle report that the Prussians were the attacking side, so that was how I played it. 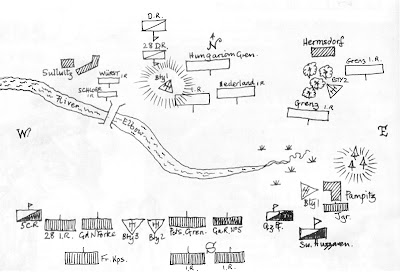 I am beginning to quite enjoy solo play. I can play at my own speed and just watch the battle unfold before me. I don't normally use any special solo gaming rules. Even when I have an opponent, my games are never particularly competitive, barring the odd bit of banter, so solo gaming seems a fairly natural development. I get some ribbing from my wife of course, who can't see the point of playing with toy soldiers in the first place, and to whom playing toy soldiers with oneself seems the definition of pointlessness. However, recently I have been fortunate enough to have some time to myself at home over the weekends and can set up and play more or less to my heart's content. This has been very relaxing. But don't get me wrong - I love it when my wife comes home as well!
Below are a few photos of the second game. 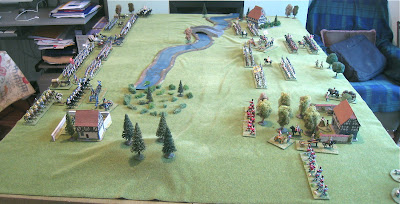 I managed to create a reasonable representation of the map. Here we are looking west across the battlefield. Table size was 6' x 4' as in the original game. 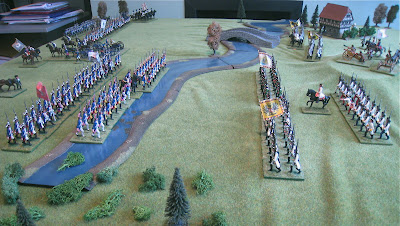 The Prussian centre forged ahead, using successful initiative rolls to cross the river before the Austrians could intervene. 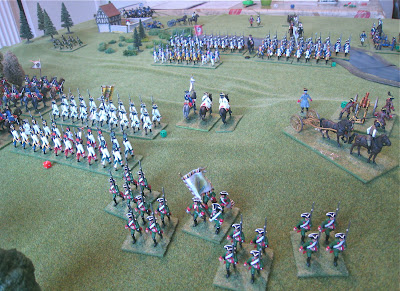 They began to get the upper hand in the ensuing firefight: Loudon's regiment was the first Austrian unit to break and leave the table. 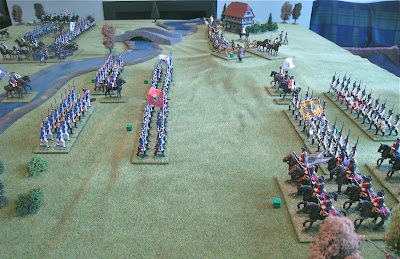 The centre again. Prussian musketeers take over the first line from the grenadiers. In the background you can see that the Prussian left flank infantry made slow progress as a result of command failures. 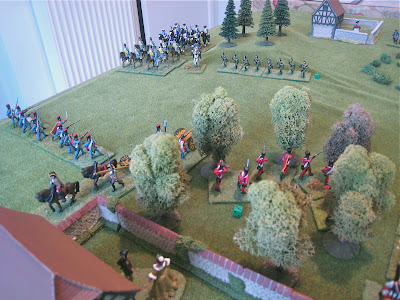 The cavalry on the Prussian right flank hooked around to the south and east of Pampitz,
to take on the light units guarding the Austrian left.

View of the battle from behind Sullwitz. 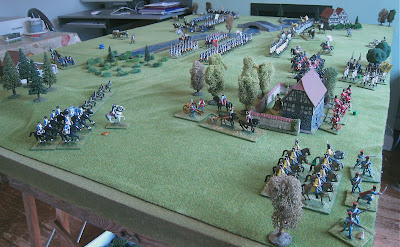 The Prussian Hussars easily drive off the Szluiner Grenz. The red uniformed Liccaner Grenz are reforming behind Hermsdorf after taking casualties from the Prussian right flank battery and jager.
They are vulnerable and will be the Hussar's next victims. The light battery supporting the grenzers won't last long either: the Prussian dragoons have them in their sights! 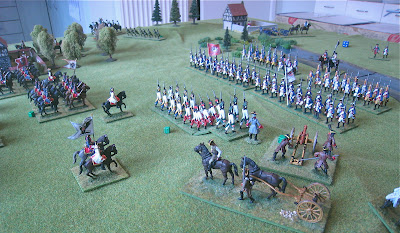 The intense exchange of musketry in the centre continues to favour the Prussians. Now only the Hungarian Grenadiers hold the line, supported by the Austrian artillery battery
but opposed by 4 Prussian battalions. 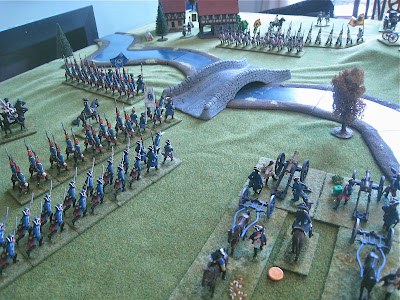 On the Prussian left the infantry are finally making progress. Artillery support from 2 batteries keeps the Austrians at bay. In the distance one Austrian battalion is starting a move to shore up the Austrian centre, but this will be too little, too late. Old Schoolers will recognise the Bellona 'River Bridge', which I recently found hiding at the back of one my drawers of wargames stuff. I was proud to use it on the table after a long absence! 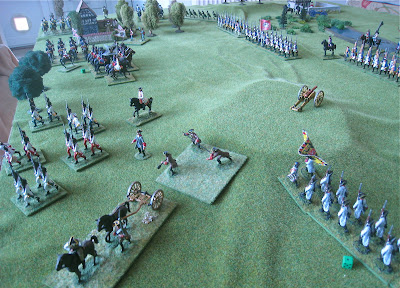 The Austrian centre collapses completely. The dragoons have moved into the left centre position to counter the Prussian flanking move but now their only job will be to cover the retreat. At bottom right reinforcements from the right flank are arriving but they have nothing to reinforce. The Austrians have lost 7 of their 11 units by the end of move 6 and have conclusively lost the battle.

The Prussians only lost one of their 14 units, also on the last move. Before the whitecoats broke, Austrian musketry and artillery was concentrated on one of the leading Prussian battalions.
This  was too much and here the unit flees across the Elbow. 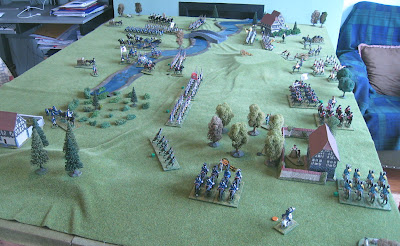 Final positions. 6 moves and 2.5 hours gaming to complete the battle.
A very satisfying game with a conclusive end. I am quite pleased with the way my rules are shaping up. I have a poor track record when creating scenarios involving river crossings, as here . This game was helped by a rule stolen from Joseph Morschauser. If a river is deemed fordable, a unit crossing it simply ends their move in the middle of the river, then on their next move carry on as normal. Firing is at reduced effect whilst in the river. If they have to fight their way out against enemy units on the far bank, they count as charging/meleeing uphill.
Thanks to the Vintage Wargaming site for making so much old material available. Inspiring as well as nostalgic!
Posted by Keith Flint at 21:04

Are you using the Black Powder rules?

Dalauppror - Black Powder are my favourite published set, but at the moment I am playtesting a set I have compiled myself, which are a bit simpler.

Thanks for commenting, Keith.

I used to enjoy David Barnes' articles, his illustrations were always amusing - tinged with Stan Catchpolesque humour. He was prolific - writing extensively for MWAN and Lone Warrior too. Sadly he died a few years ago (at no great age either) - another real talent lost. Cheers.

I agree with your wholeheartedly with comments about solo gaming. It is always nice to have an opponent and the chat that comes with this, but there are the times when a nice solo game at a gentle pace, with a nice home made sloe gin, is just what the Doctor ordered.

Nice battle report. I am currently painting figures for Black Powder, also in the Seven Years War period. I will check out your rules. (I think I saw a link to them in another post)
Bill

Brought this game as a HoW scenario at the forum!
Cheers!