Honours of War: Curtain Up!

In the beginning was Donald Featherstone.

At least, that was the case for me. War Games was the first wargaming book I ever encountered, in my local library around 1970. I continue to dip into The Don's books in the odd quiet moment, and many of his ideas have stuck with me over the decades, awaiting a re-awakening.

One of those ideas is the use of a curtain across the wargames table, to provide a very simple, direct and dramatic representation of 'the fog of war'. This idea is rarely seen or even discussed these days, but in my humble opinion it deserves greater attention. I mentioned it on this blog a few years ago, and the contraption I devised at that time has mostly remained under the marital bed since then, rarely seeing the light of day. Recently, I decided it was time to use this device once again, to spice up some attack-defence games I had developed. But before I present a couple of HoW scenarios using this old-fashioned but delightful contrivance, let's recall the words of the man himself.

Another variation is to erect some sort of curtain or barrier across the middle of the table so that each general can lay his troops out without his opponent being able to see his dispositions. Many horrible shocks await each general when the curtain is lifted! The commander of Blue army discovers to his horror that the enemy has a great preponderance of cavalry on their left flank whereas he has but one puny infantry regiment facing them. His own strong left flank, with which he intended to battle away at the enemy, are massed threateningly enough, but unfortunately there is nothing opposite them. This makes for hasty rearrangement and even the best-laid plans of battle can come to naught when the curtain is lifted.
Battles With Model Soldiers, (1970), p. 32.

Anyway, on with the show - here are two scenarios written for HoW which include the use of a curtain across the table. Modern-minded wargamers will be relieved to find that I offer alternative deployment options for those unwilling or unable to deploy such a device. As in the rulebook scenarios, the games are sized for 28mm troops organised in accordance with my suggestions. I have come to realise that HoW players are amongst the most quick-witted and enterprising of wargamers (well, naturally), so any adaptions to other figure sizes and organisations are left safely in your hands.

1. The Action At Inzl
This scenario adds an extra factor to the whole curtain thing by making the fog of war affect terrain as well as troops. As we all know, even the defending side might only have a rather sketchy knowledge of the terrain occupied by, or being advanced over by, the enemy. Therefore, as well as deploying their troops in secret, players will have some terrain items to place where they wish, hopefully to their advantage and the enemy's disadvantage.

The map shows a 6' x 5' table, with grid squares at 1' intervals. The fuzzy line across the centre indicates the position of the curtain. 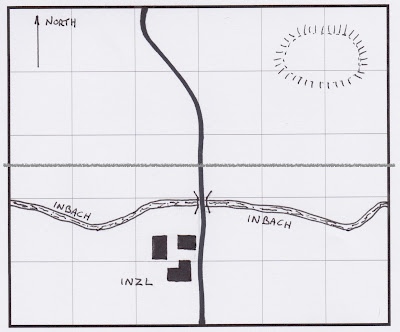 The Blue force is attempting the block the advance of a slightly larger Red force. Blue has taken up position behind a stream around the imaginary village of Inzl. Red is attacking from the north.

Force Notes
As usual, I suggest that players juggle troop types to balance out relative National Characteristics. However, having a brigade of top quality infantry in the attacking force is a good idea to give the attacker a real chance of victory.

Scenario Conditions
Red is the designated attacker. Set up the table as per the map, and then place a curtain across the middle of the table.

Red can deploy anywhere up to 30cm from their table edge. In addition, the Red player must place 2 extra terrain pieces (a hill and a wood, of medium size) on his side of the table, but outside his deployment area and not within 10cm of the curtain.

Blue can deploy anywhere behind the stream. In addition, he must place 4 extra terrain pieces  (a bridge, a wood, a hill and a marsh, the latter 3 of relatively small size) on his side of the table, but not within 10cm of the curtain. The bridge must, of course, be set up across the stream.

The stream has steep banks and counts as a passable river. The village will be classed as a rural BUA. All hills are gentle.

Use the normal victory conditions from the rulebook. The village is worth 1 Army Point. For each Red unit in good morale (3 hits or less) that reaches the Blue side of the stream, Blue loses ½ an Army Point.

If not using a curtain, set up all the terrain as desired, then Blue must deploy either 2 brigades, or 1 brigade and 1 independent unit. Then continue deployment by alternate brigades or independent units from each side, using the deployment zones already described. Obviously, Red will have the luxury of deploying his last 3 brigades or units in full knowledge of where Blue is.


2. The Combat At Lützingen
Here, Blue is defending the town of Lützingen, which is off the table to the north. The Blue force has taken position around a road junction south of the town. The Red force intends to attack and defeat Blue in order to occupy the town. In this scenario the terrain is pretty basic and so is fully laid out before the battle.

I have drawn the map for the common table size of 6' x 4'. Once again the position of the curtain is shown by the fuzzy line, in this case slightly south of the table centre. 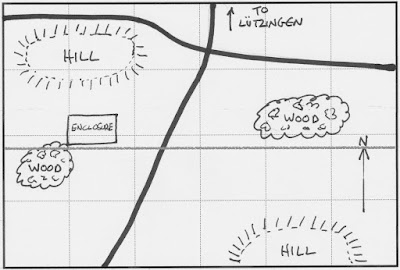 The artillery on each side may be fielded independently or included in any infantry brigade. As with the previous scenario, the suggestions for infantry quality on both sides are made to provide an interesting and fairly balanced game - Red's numerical superiority is limited and he will need a qualitative edge.

The Blue cavalry are in reserve in Lützingen – they arrive at the start of move 4 on a roll of 4-6. If this fails, add 1 to the roll on each subsequent move. They may arrive up to 20cm either side of the road.

All hills are gentle.

Each side seeks to break the other, in accordance with the usual victory conditions. Blue loses ½ an Army Point for every Red unit in good morale on the northern hill or north of the east-west road.

If not using a curtain, simply deploy by alternate brigades or independent units, with Blue starting. Use the same deployment zones and distances.

Pre-Game Bombardments
The website has some simple new rules for these, which I feel can add interest (and perhaps a little extra realism) to an attack-defence game. They can be found on the 'Amendments & Clarifications' download, and would make a good addition to either of the above scenarios.

Some Photos
The reader will be relieved to know that both these scenarios have been playtested and should give good games. Shown below are a few photos to give an idea how they played out with my own 28mm figures. Suffice to say I lost at Inzl, and played out Lützingen solo, where the attacker won. Yes, alright, I didn't actually use the curtain for the solo game. No sniggering at the back.


To Conclude...
Yes, it's time to get constructing those curtains (mine is actually a table cloth). They're only present for the time it takes to deploy, but they make for a great game. They are of course particularly suited to the Ancient and Horse and Musket periods, but they could also have their place in the more simple type of Modern battle. As a way of creating a bit of surprise and representing that feeling of not knowing what the enemy is up to, they are simple but effective, and add interest to straightforward attack-defence games.

Maybe some of you will prefer a sheet of hardboard, or a line of terrain tiles set on edge. Let me know of any bright ideas you have.

Neat to see this Featherstonian idea in practice. It has always intrigued me. Your RSM95 (nee Pax Britannica) and Minden figures look good too.

Yes ..... Hooray for Featherstone - also my mentor to all things wargaming in those early years.

A very well written and highly useful post Keith, thank you very much. I remember reading of the curtain idea at the time but have never tried it. Will have to give the scenarios a go sometime and I am greatly enjoying trying out HoW.
Chris
http://notjustoldschool.blogspot.co.uk/

I remember that moment that the curtain was raised in our game! It really does add something else IMHO, but as you say, is sadly rarely used. Something to try and rectify for some future games.....

We used a similar sort of method for our Armati games some time ago - makes for some interesting commentary at the start of a game!

Now I remember why I love your site! Thanks for the inspiration...Best regards, Bill

Charge! was the first wargame book I came across. I was 8 or 9 at the time. After growing out of it I came back around 11 years later. I really don't know why! It has given me nearly 40 years of a hobby life of variable quality. My best years are still going.

An excellent selection of photo's and action, thank you for the inspiration Keith.