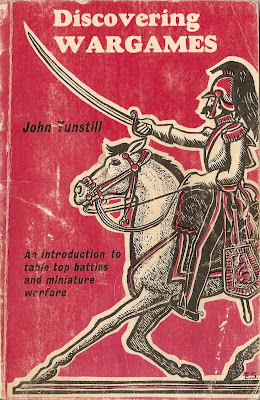 I suppose you could call this the latest in an occasional series: posts where I dip into the world of nostalgia by recalling old wargames books and wargames personalities from the early(ish) days of wargaming.

Recently I stumbled over a mention of John Tunstill's Discovering Wargames somewhere on the net, and remembering it from the past looked into whether copies were still available. Of course, on the internet these days just about anything is available, and I easily picked up a copy for peanuts - £4.86p, most of which was post and packing.

Having the book (more like a booklet - just 64 pages) in my hand revived memories from my early teenage years around 1970 when I sought out any book I could on wargaming; usually via my local library as cash was short. In those days you requested inter-library loans on postcards which you addressed to yourself, which would arrive on your doormat a few weeks later announcing the arrival of your requested book at your local library. Strange to see the postman delivering a postcard in one's own handwriting. I remember with pleasure those walks to the library clutching my reservation card and anticipating reading a new book on my emerging hobby.

To be honest, I remembered Discovering Wargames as one of the less inspiring titles - rather brief, and lacking the reading pleasure of a Featherstone or Grant title. But for my minimal outlay I was pleasantly surprised with the little book when it arrived recently. For a start, I had forgotten it included some  photos of  old figures and games which added to the nostalgia value. And for someone with an interest in the development of our hobby the text formed an absorbing link in the chain.

Mr Tunstill introduces rules for the various aspects of wargaming as he canters through the periods - movement is covered in the ancient period, firing and melee rules are introduced in the early medieval period (or the Dark Ages, if you use the author's classification), morale appears in the later medieval period, then more firing rules appear as the horse and musket period emerges. There are yet more firing rules covering the later horse and musket period (the ACW in particular), before the author concludes that 'modern wars', from WW1 on, are rather too complicated and difficult to cover without developing rather complicated and difficult rules, which he has no room to include. This latter reminds me of Charles Wesencraft's conclusions in Practical Wargaming. All a bit strange considering Donald Featherstone had provided 2 perfectly workable sets for WW2 in his 1962 classic, War Games.

Mr Tunstill's approach, in a book first published in 1969, shows a strong faith in time and distance scales, and produces some straightforward and fairly traditional rules which are a little more advanced than those proposed by earlier authors. What is missing is an overview of how the various elements come together in a game move, though the traditional move-fire-melee-morale sequence is implied. Simultaneous movement to written orders is sternly insisted upon. For any newcomer in 1969 who was trying to 'discover' wargaming, cobbling together a complete set of rules for a particular period using this book might have been a bit tricky, though perfectly possible with a bit of initiative and research.

Interesting to note that by John Tunstill's time, 'wargames' appears to have become one word, a situation which has continued to the present.

Overall, an interesting read and a book I know I shall come back to in the future. A worthy addition to my collection of old wargames books. It is good to record that Mr Tunstill is still with us, at least according to this biography.
Posted by Keith Flint at 21:05

Gosh this post takes me back, Discovering Wargames was the first wargame book I ever bought (because it was the only one I could afford on a schoolboy's pocket money!) and my Airfix figures played the rules out endlessly. I still quite like the simple morale system.

Glad you found it of interest Brian. So it WAS possible to assemble Mr Tunstill's parts of rules into a whole!

Still have my exact same copy! That was the book that really drew me into wargaming.

Thanks for reminding me!

I remember that shop near the IWM well. I was a regular visitor to London in the early-mid 1970s from Australia as a school boy. In them thar days, no one had metal figures in this here outer spiral arm of the galaxy - Airfix all round. I stumbled upon the shop on my way to see the Museum, and that was it - done, for life.

Thanks for bringing back all the great memories i have of my wargaming days. I loved the simple yet playable rules of this book