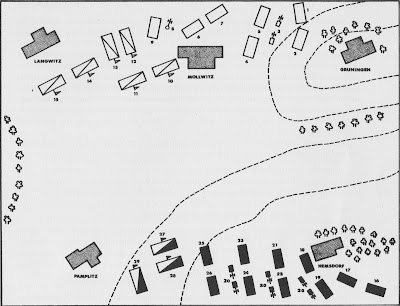 Lovely re cantonment of Grants report Keith. I have always treasured the Wargame and still regularly read through it just to feel good. So well done and hard luck at the same time.

Well, maybe not as impressive a spectacle as the Partizan refight but still a worthy and attractive refight.

I think it is still a wonderful spectacle! The Austrians did stunningly well and it will be interesting to se how the historical action plays out. Nice to read your thoughts on how Grant went about setting up the game, given all the historical research he did.

Yes, quite a spectacle but one which I try to tell myself I could achieve (delusional maybe). My local library was selling off a copy of The Wargame many years ago, without the paper cover but only 20p! I still enjoy referring to it. Grant the Eldest had a way of communicating the fun of his games in the book and his articles and this is something I think you achieve also. I must get out my SYW figures again. Thanks for the report. Best wishes.

Good fun and a nice looking game. You are right that the Prussian cavalry needed more support. They were out on a limb , of inferior quality and inferior numbers.
I was also very lucky. I won two ir three crucial initiatives when Keith had moved into range, so I could insist that he moved first and thus the Austrians shot, caused casualties on the Prussians and reduced the Prussian return of fire. I also benefited from my overlap on the Prussian left where I soon had two and then three units shooting at one Prussian. .
Keith is correct tgat on the Prussian right he should have moved more quickly, but as I perceived his strength I retired the Hungarians into the village which would have enabled me to hold on for a coupke of moves.
Sorry for the satisfied expression , but when you see the look on the face of an opponent who has lost his cavalry, has to turn his guns to flank, is about facing the second line, is outnumbered on the flank and has his schwerpunkt yet to arrive, well its hard not to be just a tad gleeful, particularly when the opponent is the Prussians....a tribe who are generally not short of self regard!
The rules are easy to understand and move the battle along quickly and the Kaiserlichs win. What’s not to love?

I reckon that's pretty much how it was Roy. It's just as well I enjoy winning as much as losing, provided it's a good game.

I had to look up 'Kaiserlichs' ('Imperials'), so that's another thing I've learnt. Looking forward to the 'historical' representation, complete with new snow terrain mat (a.k.a. a converted old duvet cover).

I meant 'losing as much as winning'.

A lovely and heart warming report thank you Keith, conveying the joy of our hobby win or lose. Good to see two fellow Cotswold gamers having a "good" time.
Chris

The battle doesn't look like Jonfreitag's representation, but seems to be an exciting game.
Well done, sir!

I had a copy of The Wargame for many years and sold it at a car boot for pence when I 'gave up' wargaming. Oh dear!

A fascinating battle. To lose some cavalry and retreat with the remaining units would have been not too bad. Your cavalry had not the support of the infantry. That maybe was your main problem.