Occasionally (indeed, very occasionally), I find myself involved in a wargaming event which represents what we might call the pinnacle of the hobby. We have all had the experience of staring at a wargaming magazine or a YouTube video, or reading a classic wargaming book, and wishing we had the chance to be involved in the fascinating games or events presented there. It is indeed rewarding when we are the ones involved rather than being one of those looking on.

I was fortunate recently (on Sunday 24th April) to have such a rewarding experience, when invited to Chris Gregg's house for an 18th century imagi-nations battle, masterminded by Ken Marshall and held at Chris's house on terrain specifically crafted by Chris himself. The game would be played over two days and would form part of a narrative campaign that Ken, Chris, and various of their friends were involved in as a continuing project. As is usual with such events, and in particular with Chris himself, the event had taken considerable preparation, both in terms of mental effort and sheer hard work. The map for the battle created by Chris and based on Ken's ideas is just one example of this preparation. It is shown below.

The order of battle which I was sent in advance (for the 'Ducal' side of which I was to be a Lieutenant-General) included over 50 units, which would be perhaps 1200 to 1300 figures. The 'Electoral' forces I would be engaging were similar, so overall up to 2,500 figures (in round numbers) would be present on an 8' x 6' table. Three collections had been combined to complete the total. And these would be 28mm figures, all painted and based to the highest standards, as I can attest. And guess what - Chris and his friends use Honours of War as their go-to SYW rule book, so this would be additionally rewarding.
On Saturday the scene had been set by a game involving the clash of advanced guards, which had led to the positions the Sunday gamers saw when they arrived at Chris's house on Sunday morning. The teams of gamers on each day were different, cleverly catering for those like me who couldn't attend both days. We were welcomed, and thoroughly briefed on what had occurred and what our objectives were for the coming game. And then off we went.
I took only a few snaps of the game in progress on an old iPhone 7. I knew Chris and others would make a thorough photographic record of what took place, and decided to enjoy the game without distracting myself and others with a personal need to take extensive photographs. A few of my photos are shown below. I am tempted to say something about the photos not doing justice to the game, but in a way they do. With such numbers of gorgeous figures and the outstanding terrain, plus the excellent light which Chris has contrived for his wargaming room, it is ridiculously easy to take reasonable photos. 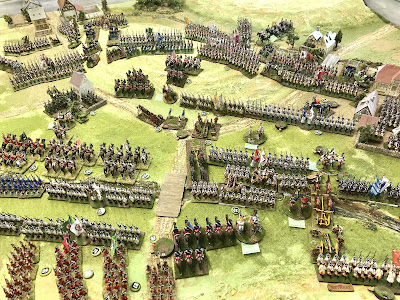 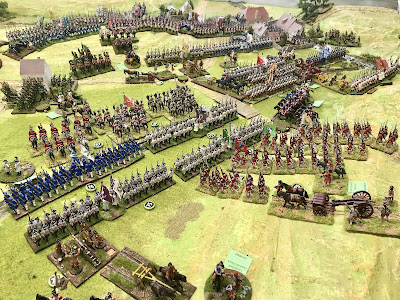 Well, Paul (my superior general) and myself started from the north of the map with the highest hopes of driving irresistibly across the table, but the strength of our opponents grew and grew. The ridge you can see on the map at D3, D4 and E4 was the scene of many a dramatic cavalry charge and fierce musketry contest, but eventually our forces were drained and there was obviously no way through. The game was called at around 16.30 in our opponent's favour. Well done to the Electoral commanders.
Despite all the serious preparations, the game was played with light hearts and much banter, just as it should be. Ken umpired marvellously, and Chris was the perfect host, keeping us fed and watered and chipping in as needed where difficulties arose over play. My own knowledge of the rules was embarassingly rusty, despite some pre-game revision, as I had not played a game of HoW since before the first UK lockdown. But small errors were soon smoothed over in a friendly fashion.
In conclusion, a day of gaming and friendship which was inspiring and highly pleasurable. One of my opposing players was my old friend Steve J, who has recorded his own memories of the day on his own blog. His photo record is more complete than mine. Chris will be placing his own thoughts and photos on his blog in due course, with a much fuller account of events and, I believe, a tutorial on how he created the fine terrain. I look forward to that appearing on his own personal blog.
I record my thanks to Chris, Ken, Steve J, Steve P and Paul for making the day such a pleasure. One of those wargaming days I will never forget.
'Til next time!
Posted by Keith Flint at 18:00

A fine overview of the day there Keith. Such events as these and the memories generated are to be treasured, especially after so long without any FtF games for ovbious reasons. I'm certainly looking forward to Chris' overview of the two days, along with plenty of his photos too, plus how he contsructed the table too.

Chris is a wonderful host and as you have highlighted a lot of effort goes into the event. Glad you had an excellent time

Outings and events such as these really are a joy, aren't they?

Excellent. I'm always envious of those who get to visit Chris and his marvellous sculpted terrain.

What a great looking game and we’ll written battle report. It looks like “traffic management “ was a key factor in the game.

You're right Jim - a very packed table. The spectacle was enhanced even if manoeuvre was a little restricted! But I loved the atmosphere of the whole game.

How many figs per unit were you playing - they look seriously large?

Average was 30-32 in an infantry battalion, 10-12 per cavalry regiment. Twice as large as I play with my units.

Lovely photos of an exciting game. I never was a fan of imaginations. But your result and report is excellent and I'm happy to see you back in the period.

Sorry to be late to this Keith I've been on holiday. Thank you for such a great write up and as a "fan" I felt honoured to be able to entertain you. It was a really fun weekend and I'm trying to persuade Ken to write us one of his "period style",highly colourful Imagi-nation accounts of it for my blog with me doing the picture captions. If he is too busy I'll just have to do it all......
I hope your "next time" might be our large September Jacobite what-if, also using Honours of War. Your readers interested in making the battlefield can see my latest blog post here.
http://notjustoldschool.blogspot.com/2022/05/the-battle-of-madling-1753-part-one.html
Your photos really are excellent and I'm so glad you enjoyed your day. Chris G

Chris, I was honoured to be there. By the way, looking back at the photos, I love the pale/bright greens you use in the terrain. I've always thought those brighter greens set off the figures much better than the darker table colours you sometimes see.

Thanks Keith. Yes indeed, I was shown by a wargaming buddy way back in the late 1960s how light green for figure bases sets off the uniforms better, and I've tried to carry that through to my terrain whenever I can....but hopefully keeping it natural.
Chris