The Combat At Asch

It has been rewarding to see some gamers having a go with my 'Simple Seven Years War' rules - see here for example. But there's no getting away from the fact that a good deal more playtesting is needed to improve them.

Of course, the best kind of playtesting is the kind that involves other gamers, especially those working just from the rules as written, well away from the author. But solo playtesting is bound to be needed as well, particularly in the early stages of development, when you can mess around with ideas without boring other participants in the game.

So I set out to play a decent-sized solo game with the new rules. To give added interest, I thought I'd make it a proper outing with a nice scenario and a reasonable number of troops. This brought to mind Charles S. Grant's Refighting History (Volume 1), which has been on my bookshelf for a couple of years without the gaming inspiration contained therein being properly exploited. A brief overview of my thoughts on the book can be found here. 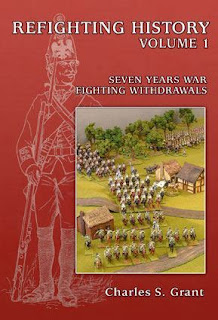 The first scenario in the book, 'The Combat At Asch' seemed like just the job. As Charles says, "the Combat at Asch has all the makings of a nice balanced action with not hugely disparate forces". The fighting occurred between Prussian troops which were part of the army of Frederick's brother, Prince Henri, and a detached Austro-Imperial force from the army of General Zweibrucken. The town of Asch is present day As, in the extreme west of the Czech Republic. The Prussians were very much the attacking force in the real campaign, and Charles first presents the encounter as it was in real life - a fighting withdrawal by the Austro-Imperials. He then imagines the Austro-Imperials standing and fighting to produce an attack-defence game, and this latter seemed to be the one for me. The fact that this is not what occurred in real life makes the game an interesting combination of the historical and imaginary. The date of the imaginary battle would have been 8th May 1759.

Forces
Each side had about a dozen units, which is perfect for a reasonable sized wargame. The one thing Charles doesn't include in most of his games is a consideration of troop and army quality, so I had to do a bit of basic research into the background of the units involved, in particular to try and discover which units might be rated inferior, regular or superior. This resulted in the following assessments:

This was generally good news as the Prussians (as I had hoped) had a worthwhile edge in quality which would give their attack a fighting chance.

Map and Scenario
The book contains a whole series of good maps for this scenario, which makes setting up a reasonably accurate table for the game so much easier. Table size was 6' x 5'. I had a little experiment with Word and managed to come up with the colour map you see below. My thanks to Dinos at the HoW forum for showing what is possible with a bit of trial and error.

All hills are gentle. The watercourses count as streams. The scenario was simple - the Prussians will attack and dislodge the Austro-Imperials from their ridge-top position.

The Game In Pictures
As usual, I will eschew a lengthy narrative account and use some captioned photos.

I called it a day at this point. The Prussians had done well, driving off 5 enemy units on the Austro-Imperial left flank (including an artillery battery), but the main ridge position was still strongly held by good quality Austrian units, and the attacking Prussian infantry had taken serious casualties. As they began to waver, the Bornstadt grenadiers were left feeling rather exposed, as the final photo shows. Reforming for a second assault would be pointless and almost certain to fail. In an interesting side show, the Croats in the woods on the Austro-Imperial left had seen off two charges by the Prussian Hussars. Well done lads!

The rules worked well, as far as I was concerned. My nagging doubt is that rules trying to be 'simple' really need a clever mechanism or two to make them interesting and engaging to play, or they tend to become a bit bland. Whether I can find the inspiration for some original procedures remains to be seen.

Better Photos?
In my search to improve the quality of my wargaming photography, I decided to improve my lighting by the Heath-Robinson set up you see below - a cheap LED strip light rigged up over the table. This produced much better colour matching, but really crisp results still elude me, despite the dining room being lit like a Dentist's waiting area. The search continues! 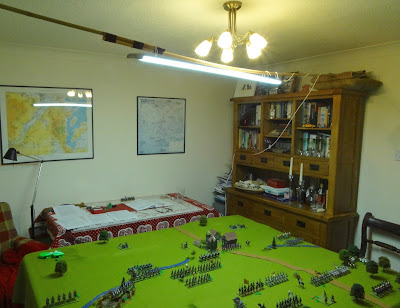 Thanks for popping over. I think perhaps some Kings of War Historical action may be next up.

Great report as always. Nice to see you in the SYW again.

Good looking battle and the lighting looks perfect to me.

Nice report and game. Enjoying playing the rules and thanks for the promo.

Nice looking game and scenario. Really looking forward to our bash next week with these rules:).

Beautiful photo's an excellent display of wargaming at its best, thanks for sharing.

A very smart looking game Keith and glad you are enjoying your new rules. Love the map - well done!

I have a similar problem with photography Keith - really close up they are generally fine, but any more "general " table views and they go a bit fuzzy. I am only using a camera on a Samsung phone, so I think that is probably the issue, although lighting at one friends place where I have regular games is a bit sub standard too!

You could try Halogen light bulbs. One of my neightbours uses these and it's like a cinema projector beam of light before they close the curtains

Lovely looking battle. Thanks also for the review of the book. The fact that he address's scaling down is a big attraction. Nice job with the lighting!