A Scenario For All Ages? (part one)

I know what you're thinking. Here we go, another battle report to add to all the other battle reports you've read (or more likely just skimmed through). The problem with battle reports is that they often have little meaning to anyone outside the players actually involved. One way to avoid this is to give some background to the reports to add interest, or offer an angle that might give the report some relevance to the hobby as a whole.

Of course, some reports are worth looking through because of the outstanding scenery, wonderful figures, or the grand scale of the action. Or maybe they're played by some wargames personality with a new ruleset to market. Being unable to offer any of these attractions, I find it worthwhile to use my battle reports to point up some aspect of the hobby, to try and make the reader think about how the hobby works, although usually in a small way.

So what's the angle here? Well, the game to be played uses a scenario from the Asquith/Grant scenario book Scenarios For All Ages. One meaning of the title is that the scenarios within can be fought out in a wide range of periods. The scenario that took my fancy recently was number 37, 'Night Attack 2'. 'Suitable for any period', it says in the opening paragraph. So I thought I would give the claim a try, and fight the scenario in the SYW and WW2 periods. This post is about the SYW battle.

The first problem with multi-period play is that the forces used are clearly based around a Horse and Musket setting - they are detailed as units of infantry, cavalry and artillery. The authors realise this and offer some advice on translation to other periods in the introduction. For my SYW battle, however, it would be easy to use the units exactly as specified. The author's choice of a 7' x 5' table as a 'standard' is another minor problem - this is hardly the most common size of gaming table. However, conversion to a 6' x 4' table presented no difficulty.

The scenario itself could more accurately be entitled 'Dawn Attack', as it involves an attacking force that has used a night march to outflank a defending force. The attackers have lost their way a bit overnight and have split into 2 forces, one of which has mistaken a more distant village for the actual target of the manoeuvre. Anyway, the set up is as shown below, identical (as far as I could manage) to the map in the book. You can see I have had some fun with the coloured pens: 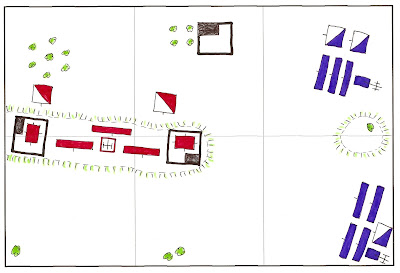 The Austrians ('red' force in the scenario) are deployed on the ridge facing south. They have 5 infantry units, an artillery battery and 2 cavalry units. One infantry unit is in each of the 'villages' which anchors each end of their line. The Prussians ('blue') deploy on the east side of the table: their units are as shown. The Prussians must attack and destroy the Austrians; the Austrians must try to re-align and see off the attacking Prussians.

My good friend Steve came around to play out the scenario and give me some feedback on my rules, which we would be using to play out the game. Looking at the set up, the Prussians seemed to have it made, and we wondered if the scenario was really properly balanced. We should have had more faith in Mssrs. Asquith and Grant! 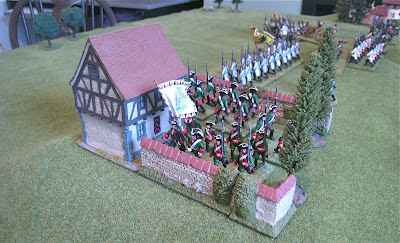 The left of the Austrian line is held by Loudon's 'Grenadiers' defending the east village. 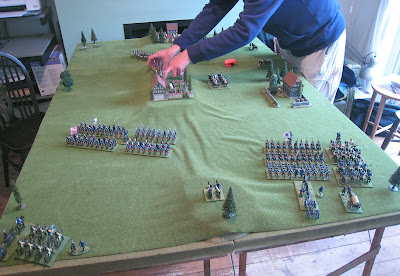 Brigades from each side move alternately in my rules. Here the left hand Prussian infantry brigade has got off to a good start with a double move. Steve begins to wheel his infantry brigade off the ridge in reply. 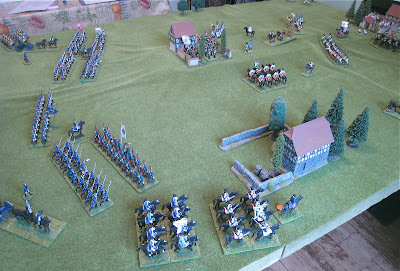 The Prussians make steady progress. The left flank Austrian cavalry haven't yet got the message about the approaching threat, having failed a command roll. 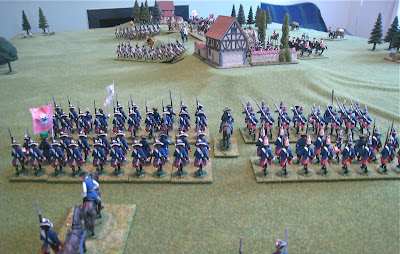 View from the Prussian lines as the infantry approach the village. 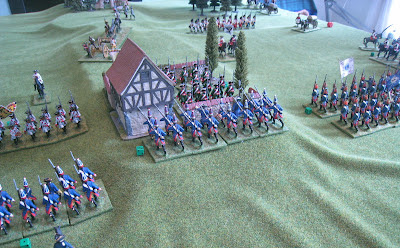 By a miracle of unequal dice rolling, the Prussian grenadiers succeed and take the east village. This overview shows the Prussians pushing the Austrians back along the ridge. In the foreground the cavalry have clashed, with one unit on each side lost. 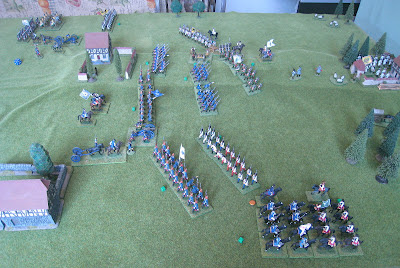 Last move fever grips both sides as the game comes to an end. Units move forward into close range for some climactic volley combat and the cavalry charge each other. Looking good for the Prussians (I thought foolishly), but it was not to be. 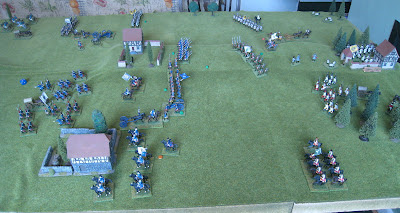 Prussian disaster. Four units are broken and destroyed ('Done For' as my rules put it) and the Prussian force as a whole has lost 7 out of 12 units. Goodnight Vienna! The Austrians lost 2 units out of 8. 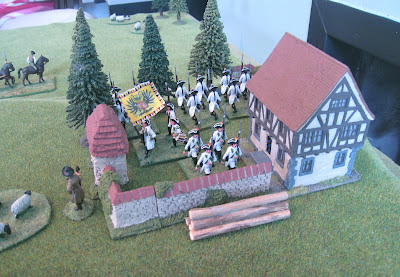 Just to rub salt into the wounds, Steve had managed to keep one infantry unit in reserve in the western village throughout the game.


And in conclusion...
...avoid final move fever. If you want to win, of course. But final move fever can be rather fun, throwing caution to the wind with everything hanging on the roll of the dice. I had only lost 3 out of 12 units until the last move, and could probably have managed a draw at least. But never mind. It was interesting to see that the scenario was in fact very well balanced - that village placed north of the ridge hampers the attacking player's deployment, and having to fight along the table prevents the attackers bringing all their units to bear at once.
Steve was good enough to compliment my rules and we didn't have any real snags. A few minor clarifications have been made, so if you want to check out the most up to date version of the rules, v.5 is here. And while I'm at it have a playsheet as well (the playsheet is just one page - ignore the blank page 2). Don't pay any attention to the previews of both items - the preview function doesn't seem to cope with my tables! The downloads seem to be fine.
Hope to have a report of the same scenario set in WW2 in a week or two.
Peace. I'm out.
Posted by Keith Flint at 13:52

A nice report (and good photos). I particularly like your commentary.

It was a great way to spend a rather wet and cold Saturday morning Chez Keith. As always the table looked nice and the variety of uniforms etc makes for a very colourful game.

The scenario did seem a little one sided to start with but we soon realised that this was not the case and it was evenly matched game right to the end.

The final turn, that I christened a 'Holby City/Casualty' one, was brought about by need to head off home at that point and ended up a bit of 'death before dishonour' for both sides. However I was not expecting to be able to inflict so many casualties on the Prussians in one turn, which gave my brave Austrians the game!

I was very impressed with Keith's rules and must say that I really enjoyed playing them, much more so that Black Powder et al. Elegant and simple but with enough subtlty to give a great game.

I wholeheartedly recommend anyone giving these a run out. I'm looking forward to giving these another try out in the near future.

Thank you for the ruleset. I've printed them out and will give them a try when my forces are ready (well into the future, unfortunately).

Nice write up and commentary about aars.

I really need to get one of those Grant books.

btw, i like your top photo of your blog.

Seconding what everyone else said. And having played that particular scenario myself helped me follow your report all the better.

Absolutely great as usual, thanks...