Pride and Prejudice (and other stuff)

I am indeed proud (in a small, non-boastful way) to have accumulated 50 followers. It was only a few months ago that this little blog only had 2 or 3 followers, but word seems to have got round. Or maybe it was putting the display widget for followers in place that did the trick. I demurred from posting any self congratulation when I passed 20,000 hits, so I will allow myself this little pat on the back.
Even more pleasing is that a modest but steady stream of comments now greets each post, usually with friendly messages or interesting and useful suggestions and information. Thank you to every follower, commenter or reader.
Prejudice
Well now, I am asking myself whether I have abandoned my prejudice or my principles. To come straight out with it, I have signed up for a years subscription to Wargames Illustrated, influenced in no small way by the possibility of some shiny new toys. Let me tell you briefly how it came about. 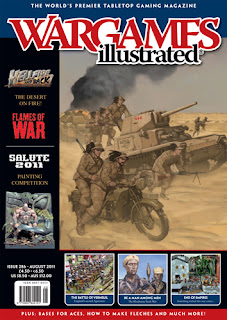 Here we have the latest issue, WI286. I bought it because the theme on Beda Fomm would be of interest, and I needed some undemanding holiday reading. I found that the magazine continues to be a pretty good read. No slippage yet towards a Flames of War/Battlefront house magazine, beyond what was evident from the start. I don't really like magazines with themed editions, but on the evidence of this issue WI has been sensible enough not to let the theme take over the magazine.

And then there were the subscription offers. £48 gets you 12 issues, so that's £4 an issue rather than the £4.50 cover price. Plus you can choose a free box set, one of which turned out to be a French self-propelled 75mm AA platoon. Now just a minute - those are the same elderly De Dion Bouton vehicles mounting 75mm guns that were used by the Poles in 1939 (see this post). 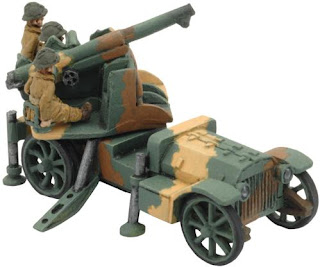 This was a chance to get hold of an esoteric vehicle that I never imagined would become available as a model in 15mm. Alright, a box set of 4 was more than I wanted (this is definitely a pattern - see previous post), but they were free, for goodness sake. They duly arrived just 3 days after ordering, and are indeed very nice models. Having more than I need I can produce the vehicles in 'travelling' and 'firing' configurations. As for the magazine, I will have to trust WI to continue to be varied and interesting.

Regarding abandoning principles and prejudices... Well, I've nothing against FoW as a rules set, or Battlefront as a manufacturer of wargames figures and vehicles. The models I have bought have all been good. But I do rather dislike the Games Workshop style, one-stop-shop approach which they have brought to historical wargaming. And I resent the endless supplements. And I get the feeling I've been suckered in by some clever marketing. But I guess sometimes you just have to cut yourself some slack.

Naval Wargames
My old buddy Paul is getting back into naval gaming, and we have had a couple of games this year using Battle Stations, Battle Stations. Finding these a bit slow moving Paul has turned to Victory At Sea, which look a lot simpler. Apparently those truly into naval wargaming find Victory At Sea a little too simplistic, which sounds promising for a beginner like me. 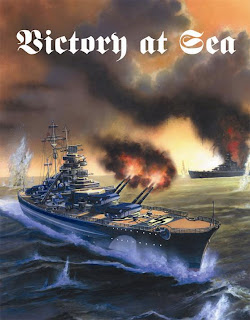 On that subject, is there any set of rules released in the last 5 years which doesn't call itself a 'fast-play' set? All I can say is, some people's ideas of 'fast-play' and 'simple' are different from mine. There are still loads of sets out there with long lists of modifiers and firing that takes forever (for example). Maybe readers could tell me about their 'favourite' over-complex rules? And any thoughts on Victory At Sea would be interesting.

Colours 2011
This great UK show is coming up on the weekend of 10th-11th September, at Newbury Racecourse. If any wargamers within range of the show haven't yet tried it out, I'd highly recommend it. Well organised, big, and a great venue full of light and space overlooking the racecourse.

Unfortunately I won't be able to put on my Hochkirch game (see here) as the other gamers I was hoping to attend with can't make it, for various reasons. I don't think putting on the game solo as 'Billy No Mates' would really work! But I won't miss the show and will go down as a regular punter. Fortunately some friends of mine from the Blitzkrieg Commander website and the Portbury Knights club will be there with a couple of WW2 games, so there will be people to meet up with and chat to.

A sprinkling of SYW models to show you soon, and probably another Polish battle. See you then.

Contgrats on the 50 followers and the 20k hits as well!! I enjoy reading your blog, keep it coming!!!

I own and enjoy playing Victory at Sea. Some purists may think it is too simple, but I would rather have that than have a game that is too complex.

I am in the camp of easy and fun is best as I want to enjoy my gaming.

I don't mind WI. I'll peruse issues and buy them when I have some spare cash. The GW marketing model for BF is totally understandable however; it made GW a shed-load of money after all and why shouldn't any business want to make money? It is why they exist after all.

I do find that as a hobbyist of several decades magazines have less to offer, but my wife has noticed that with her hobby mags too. But enjoy the reading, the eye-candy and the addition to your Polish army.

But you may also want to take a look at Battlegames. Cheaper, not as flash and a bit more traditional. Some solid writing in it too.

Congrats from me too. You have a good blog Keith.

Thanks to all for the comments.

James, I agree from FoW's perspective their marketing model is working. I just don't like it. For me it's not the spirit of wargaming.

And on that subject, I do indeed have a subscription to Battlegames. 'More traditional and some solid writing' - exactly right!

Nice blog, thank you for your post on the Polish anti-aircraft truck.

What does "fast play" mean? When I see that, I hope it means, "You can set up and play in less than 4 hours.

I suppose it could also mean there are fewer table look ups, less exceptions, and more interaction between players during each turn.

I'm in marketing and what drives me crazy about my profession is when one of my people simply uses the popular words to sell their product...when in reality, their product doesn't do that thing at all. I get why they do it.

One thing I would want to say to game producers - find what you're players say they like about your game and use those words to market it. If they never bring up the words "fast play," then don't use them. For example, Command Decision doesn't claim to be fast play (and it's not) and it has a pretty strong following.

Anyway, congrats on the 50 followers. I would say putting your join tab at the top helped. But what really got you there was your variety of topics, good pics, and mostly good writing skills that make it a pleasure to read.

You're right of course. Publishers put 'fast play' on the cover or in the introduction because that seems to be the popular direction these days.

Thanks for commenting and for your kind words.

Keith, I have Victory at Sea: Age of Dreadnoughts, the WWI version of the rules. If a guy's idea of the perfect naval wargame is Seekreig or Fear God and Dread Nought, VaS isn't going to satisfy.

I bought AoD because most of the folks I game with are horrified by more 'realistic' games. We've played it and find it very enjoyable. It has the right feel for WWI naval combat and I imagine VaS is the same. I prefer a little more complexity myself, but VaS has a lot to recommend it.

Thanks Adrian. We played the Battle of the River Plate scenario as an introduction and i found the rules quite complex enough. The game was enjoyable. I was in the strange position of not knowing enough about the background to appreciate whether the rules were 'realistic' or not. Usually I do my research.

'Horrified'. I love the way you use that word. Exactly my reaction to a set of rules (not VaS obviously) that are too much trouble even to read, let alone play. I guess we've all encountered them.