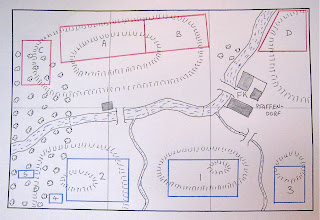 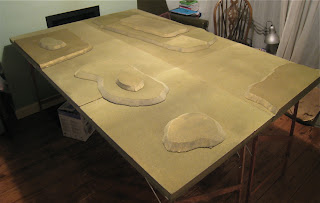 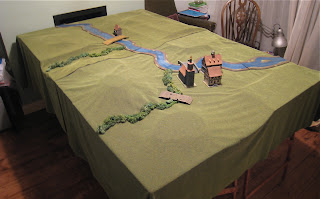 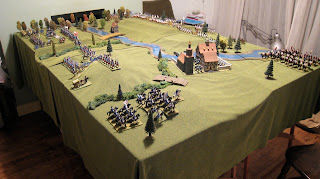 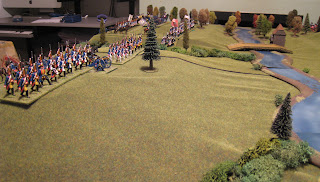 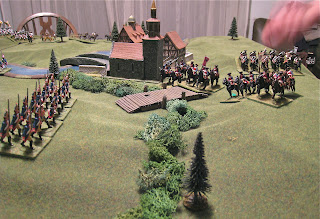 The rules worked well and the battle played out as it might well have done in real life, but there was definitely some sparkle missing.
Consulting my copy of Scenarios For All Ages, by those kings of the scenario Grant and Asquith, I quickly found that where a river has to be attacked across in one of their games it costs a bit in movement but nothing else, and is usually fordable for its entire length. Pfaffendorf was inspired by the fictional Battle of Otterlitz in Volume 1 of the Classic Wargamer's Journal, but on closer inspection I found that the river valley in that battle (dating from 1957) was occupied only by a stream, which was easily fordable.
Ho-hum. The lessons are obvious. If almost the entire table is divided by a river, make it easy to cross. Or restrict your river to a small section of the table so forces can move around it. And if the table is filled by the opposing armies, give them the ability to get at each other and create gaps that can be exploited. Wargamers like manoeuvre: real battles may have often been a slogging match, but for our fictional wars we appreciate the dashing cavalry charge and the outflanking infantry advance.
However, all is not lost. I did like the look of my table when set out, so I will refight Pfaffendorf with the river removed and replaced by a road, and the town moved a little towards the centre to give the cavalry more room. We'll see how that goes.
See you soon!
Posted by Keith Flint at 20:53

Yeah, setting up terrain is trickier than it first seems.

All of your conclusions seem sound to me.

Ahh cool I think I had an uncle into this
So tell me is there ever "live action" type re-enactment events?

Hi StepVheN,
The re-enactment thing is a whole different hobby. Some wargamers are re-enactors but only a minority (and I'm not one myself). But there are a good number of re-enactment events that take place during the year, in all historical periods.