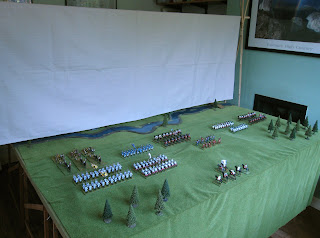 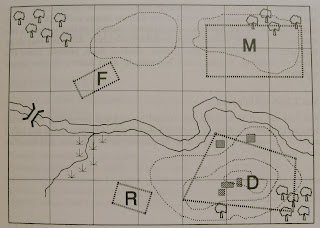 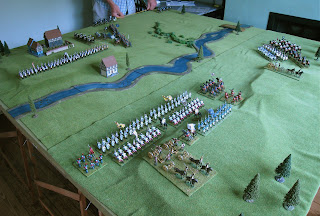 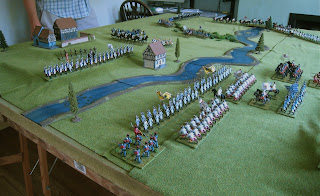 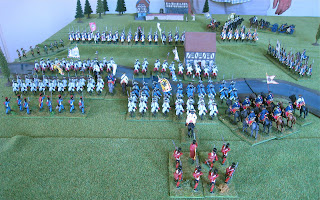 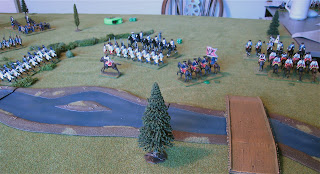 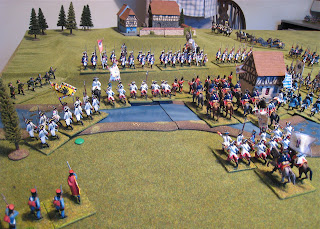 Here is the final attack going in, on the seventh and last move. You will notice how depleted the units now are. In front of the dragoons (waiting to exploit a breakthrough that never came) light troops have been pushed forward to fill the gap in the attacking line. Of course, this attack was a failure like all the rest and the Austrians gave it up and retreated. The game was played with the Rank and File rules, which I continue to like. One or two reservations have surfaced, but with so few games played I will keep these to myself until I build more experience with the rules.
I have to say I was pleased with the look of the table. As I have said, I continue to have nothing but praise for the TSS system which has served me well for many years. But it's nice to ring the changes once in a while. And the curtain idea was great fun to use; simple but effective.
Comments encouraged, as usual. Happy summer!
Posted by Keith Flint at 10:29

A nice post - really appreciated seeing your thoughts on how the scenario design panned out and how you might change it.

Looks like the curtain idea was a success! Really enjoyed looking at your armies of RSM figures and reading your battle description. Your table set-up is really attractive too.

A good battle report . . . and I appreciate your "thoughts" following too.

I agree that the table and troops looked splendid.

Nice report and good commentary on terrain/river pieces, scenario and using a curtain.

again a very inspiring post. Thank you.
As I said before I recognise myself in your journey through "rulesland". Your table is also very well done: simple without being boring, splendid indeed. This pointed me in the direction of "The Terrain Guy" products, which produces mats and hills/rivers in matching colours.
May I suggest using strips of velcro on the backside to join both battlemats when in use, it gives an almost invisible joint and no need for overlapping.

All comments very much appreciated. And thanks for the tip, Peter.